With a focus on provenance, ingredients and complex flavours, slow alcohol is catching on fast 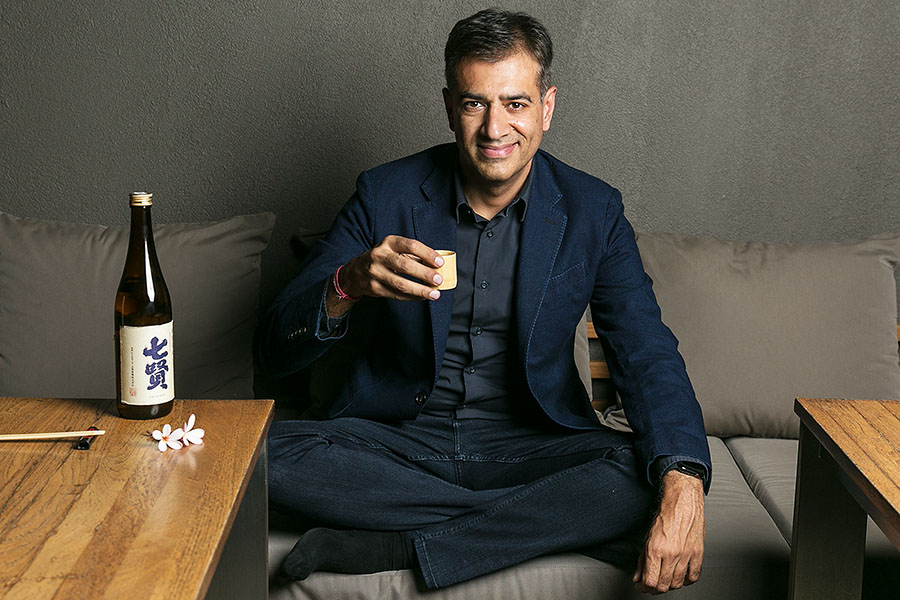 It’s early autumn in Cognac, the small French brandy town, and the surrounding countryside is bursting with the mellowness of fall. Neatly parcelled vineyards soak in the warm afternoon sun. There are fields of sunflowers and corn, and the river Charente meanders its way towards the sea.

At Le Logis, a charming villa, set in the heart of this countryside, François Thibault, a globally-reputed maître de chai (cellar master), asks me, “What is that one flavour you associate with French gastronomy?” That’s a tough question to answer for a food writer because we are always thinking of so many flavours at one time. “Er, escargot,” I reply, leaving Thibault a bit disappointed.

Almost anyone else would have answered differently, and said “bread”. You can’t be in France and not smell freshly baked bread everywhere: Delicious croissants, pans au chocolat impossible to get anywhere else in the world of the same quality, buttery brioche and baguette, crisp on the outside, soft inside, light and airy.
Thibault is not making idle small talk. He wants to draw my attention to bread not just because it is gourmet art in France, but also because the cellar master has put its flavours into a spirit. Last year Thibault got together with acclaimed chef Alain Ducasse to create the world’s first gastronomic vodka for Grey Goose, simply called ‘Grey Goose Interpreted by Ducasse’. Taking blé panifiable supérieur, a finely-ground flour made from soft winter wheat (the only grade of flour permitted in bread-making in France) from the historical Picardie region, Thibault toasted the wheat in three ways. This was ostensibly inspired by Ducasse himself, who cooked wheat in a pan for Thibault so that the duo could study the various notes and aromas arising from it.
The gastronomic vodka has three distinct notes—of brioche, flavours of green chestnuts and almonds, and rich chocolate and coffee that come from caramelising wheat. It is a spirit that you cannot down in a single shot. (Most vodka in the past was made as a rough spirit that necessitated downing it as shots at freezing temperature. Fine vodka is the antithesis of this.) Instead, you must savour it slowly at room temperature, appreciating the complexities as new notes appear at various stages of drinking it. Though the vodka is available in all Ducasse restaurants and certain other global markets, in India it is only available at airport duty-free stores (around $100 for 750 ml bottle). “But it may get into your bars soon,” Thibault says. 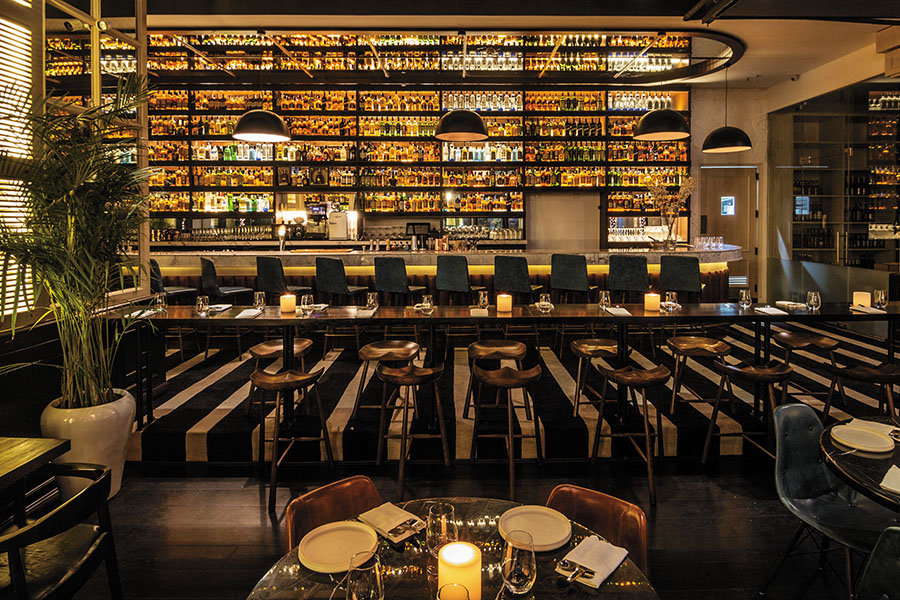 Whisky Samba in Gurugram does cocktails only with quality liqueurs
If gastronomic vodka is slowly making its presence felt in luxury bars around the world, one of global mixology’s biggest trends has to do with what is now being billed as “slow alcohol”. Like slow food, the idea of slow alcohol is to put the focus back on complex flavours, provenance of ingredients, and old ingredients that may be lost to us if we don’t reclaim our gastronomic cultures.

More evolved consumers are looking to savour these experiences in a glass rather than get sloshed. Wine and whisky, as well as spirits such as cognac and gin, have always placed a premium on terroir (a region’s air, water and ingredients that lend character to the drink) and botanicals (herbs, fruit and farm ingredients). They have already been pegged in the “slow” category—at least at their highest end of retail. Now, it is the turn of other spirits.
Trendy bars in London, Singapore and New York are experimenting with liquors like mead (made from honey, thought of as a medieval drink) port and vermouth, as well as Italian and French liqueurs that were earlier thought of as something from an old, bygone era. This comes especially at a time when more high-end, millennial consumers are looking for sophisticated flavours but lower alcohol content in their drinks.
While this may not be a trend in India as yet, bar owners are beginning to take cognisance of this shift towards slow alcohol. Vaibhav Singh, co-owner of Perch, Delhi, foresees vermouth (fortified and aromatised wine) as an emerging trend even in bars in Mumbai, Delhi and Bengaluru. “Internationally, vermouth is already big, and though in India we are restricted by policy and are not able to import much, it will catch up here too. I foresee many bars making in-house versions of these aromatised wines,” says Singh. (The Food Safety and Standards Authority of India or FSSAI mandates that the entire formula must be printed on the label; however for complex herbal liqueurs, old recipes are closely guarded secrets, which is not possible.) Wormwood plant, whose extract is used to flavour vermouth (as also absinthe) is not found in India, and legalities around its use in food and drink are unclear. But wines can easily be fortified and aromatised with other herbs, bartenders say.

François Thibault (right) and Alain Ducasse created the world’s first gastronomic vodka
Image: Alain Ducasse: Sergi Alexander/ Getty Images
Slow alcohol is likely to catch up fast because of the whole phenomenon of day-time drinking. Bars and cafes are now places of work. “In a gig economy, our customers are young professionals and entrepreneurs who come through the day and not just after work or on weekends. They don’t want to get drunk, but want to sip something complex and interesting as a gourmet choice even as they work,” points out Singh.
This gourmetisation of drinks means that chefs, spirit makers and bartenders are working more closely than ever before. The boundaries between the kitchen and bar are disappearing. Chef Manu Chandra at Bengaluru’s Toast and Tonic has been running his ‘Wednesday special’ menus, inspired by memory, local, seasonal ingredients and travel, and each of these comes with a ‘slow sipper’. For instance, a recent menu had a lemon meringue gimlet made from kaji limbu (the Assamese lemon variety), with a meringue dessert-like creamy top, brûléed to finish.
Since India does not have many options with imported flavour enhancers for cocktails—due to the FSSAI requirement and high taxes—a variety of shrubs, tinctures and bitters are being made in-house by bartenders from local ingredients. The focus is also shifting towards getting luxury liqueurs to mix with premium alcohol. “Since liqueurs have a higher sugar content, they are highly taxed in import. So, for a long time, bars did not stock these and focussed only on straight spirits. The thought was that a customer would pay for good quality whisky or vodka but the price of a cocktail would go through the roof if these premium spirits were mixed with expensive liqueurs. That is why we had those cheap syrups as replacement,” says Nitin Tiwari, one of India’s top bar consultants.

“ Our customers don’t want to get drunk, but want to sip something complex and interesting as a gourmet choice.”
Vaibhav Singh, co-owner, Perch

Now, with consumer tastes evolving, this is changing. A bar like Whisky Samba in Gurugram does cocktails only with quality liqueurs—the Italian bitter amaro, limoncello from Capri and Dolin, a vermouth with AOC certification produced in Chambery in France. The difference in quality these make to a Manhattan or a whisky sour is immense.

“Evolved consumers are finally moving away from synthetic sugary drinks. No one could have imagined the popularity of aperol in Indian bars two years ago or even of barrel-aged negroni that some bars are doing,” says Tiwari, while wistfully talking about the range of French liqueurs that are being rediscovered internationally but not available in India: Elusive ones like oak-aged Benedictine (the recipe, said to be developed by monks, has 27 herbs), Kummel (flavoured with fennel and cumin) and Suze (Swiss liqueur made with the roots of the plant gentian), made with recipes dating back a few hundred years.

One day there may be enough demand for these too. In the meanwhile, at least a beginning has been made and it is no longer necessary to quaff vast quantities of badly made vodka to have a good time. Instead, you could sip responsibly, savour notes from a brandy balloon glass, and be part of a gourmet bar life.