Avni Biyani of Foodhall: The trendsetter

Kishore Biyani's daughter has successfully scaled up the most premium offering from the retail king's stable. And she's just begun 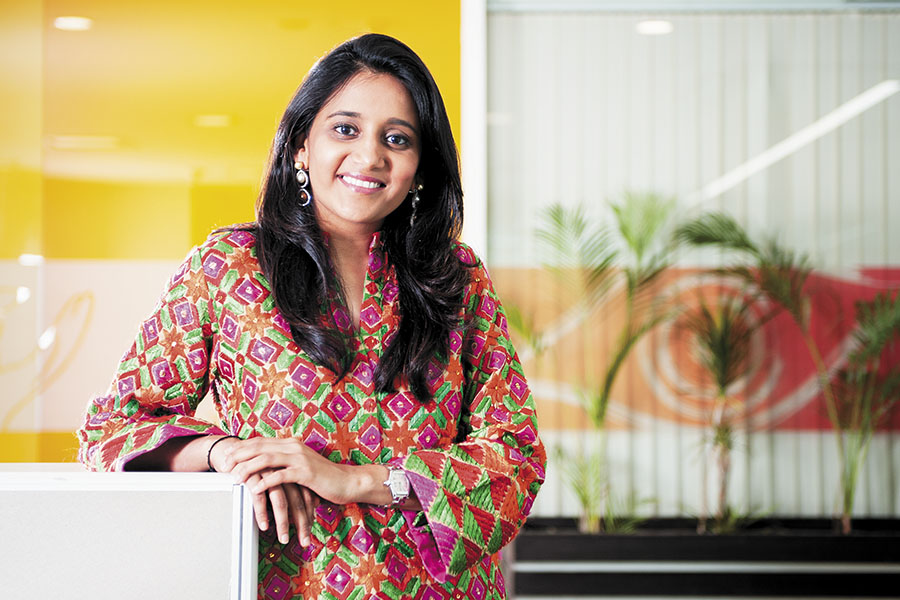 The first time Avni Biyani imported tomatoes from the Netherlands to sell at Foodhall, her mother threw a fit. “When I told her they cost Rs2,500 per kg, she thought I had gone crazy. She told my father no one will buy it. But he was so proud of it that he went around telling people. He still does that because, for him, it is value additon at its best,” she says.

You could attribute the words to a fond, indulgent father, but Kishore Biyani surely knows a thing or two about retail. The founder and CEO of Future Group had pioneered organised retail in the country. Under him, the Future Group operated diverse retail formats—Big Bazaar, Central, Brand Factory, Pantaloons (since sold to the Aditya Birla Group)—and was dabbling in a slightly-premium concept, Food Bazaar Gourmet, with moderate success.

But when the Ruias (who own Mumbai’s upscale Palladium mall) wanted a store that would cater to an upwardly mobile segment, Biyani knew he had to look beyond Food Bazaar Gourmet. “The Ruias were encouraging us to do something that was much higher than a Food Bazaar Gourmet and we were toying with the idea where customers could come and shop in an unhurried environment, where ‘deals’ were not available,” says Avni, 27, seated in her tenth-floor office at the Future Group’s headquarters in Mumbai’s Vikhroli.

That’s how Foodhall, a premium food superstore, came along. The first outlet was set up in Palladium mall in Lower Parel in May 2011 and, in 10 days, Avni, who had just returned to India after completing her graduation from New York University (NYU) in sociology and political science, joined the team. “My father chose the colour for the brand, a distinct light blue and brown, and the tagline ‘for the love of food’ and just gave it to a team to handle.”

Today, Avni, concept head of Foodhall, has scaled the number of stores to seven, in cities including Mumbai, Pune, Delhi, Bengaluru and Gurugram. Under her leadership, the store has successfully positioned itself as a gourmet, premium food retail chain which, retail analysts say, is the only such offering in India. The number of stock-keeping units has increased to 6,500 from 2,000. While the company refuses to divulge revenues, it does disclose that the business broke even in 2014, is profitable and has been growing by around 14 percent every year.

“Avni would consult me a lot in the beginning, but now she handles things on her own. She brought in a perspective which we didn’t have and that is understanding the new generation, new India, food culture and global cuisine,” says Biyani, 55, adding, “without her, we wouldn’t have been able to create Foodhall.”

Business has been Avni’s thing since childhood. “For as long as I have lived, I have only visited shopping malls and stores,” she says. She developed an interest in food from a few culinary classes that she took during her stint at NYU. But her biggest learning about the sector she operates in came from a year’s gap between the opening of the first and second store. “We started looking into every cuisine and every product in every country and realised there is so much one can do with cheese, meat, fruits and vegetables,” says Avni.

This was also the time she realised that there is a discerning customer who is willing to pay a premium for quality products from across the world. It would be a classic case of demand meeting supply, she felt.

Her instinct proved to be right. Says Harminder Sahni, founder and MD of retail consultancy Wazir Advisors: “There is a clear trend in the market for premiumisation of consumers. Incomes at the top of the pyramid are growing at a faster pace…and they are looking for something differentiated.”

Concurs Arvind Singhal, chairman and MD, Technopak, “Of the $250 billion [around Rs16 lakh crore] food market in India, premium and lifestyle food products constitute $3 billion and has been growing at around 15 percent year-on-year. The category has a huge growth opportunity because there is an evolution of the Indian consumers’ palate; with more exposure to international cuisines, they are beginning to experiment more.”

In the premium space, Foodhall faces competition from retail chain Godrej Nature’s Basket, which has a larger scale with about 30 stores across India, including in big cities like Mumbai, Pune and Bengaluru. But analysts feel that while Nature’s Basket has a stronger brand recall because of its upper middle class target, Foodhall is positioned a level higher. “The gourmet category is more pronounced in Foodhall,” says Nabankur Gupta, a brand expert and founder and CEO, Nobby Brand Architects. Often, scaling up comes with a flipside: A dip in the quality of service. Adds Gupta: “The real test for Foodhall, too, will be to maintain the current level of service, delivery and customer interaction as they scale up.”

Along with its stock of premium and imported gourmet food items, Foodhall also runs its own bakery and kitchen, and manages its own supply chain. “It stocks everything, from regular dal, aata, chawal and ghee to the most premium food. It has been designed to complete a customer’s shopping basket,” says Avni.

The company has also launched a bunch of its own brands, which includes the spices brand ARQA, The House of Tea, dry fruit brand Bustaan, a traditional food range under Traditions, personalised chef service Party Chef and gifting brand Blue Ribbon. Recently, Avni also co-founded WhisQ with dessert chef Pooja Dhingra, and launched a nine-piece macaron set under the brand.

Jay Jhaveri, COO, Foodhall says, “The one similarity between Mr Biyani and Avni is that both are risk takers. They have this vision about things. She has a foresight about what she wants to achieve and she drives it very well with the team.”

That her father’s company had the capabilities and the network to ramp up operations may have made the job a tad easier. But it was only just, says Avni. It wasn’t enough to stock the store with premium products.

While customers knew of the products through international travels or multiple food channels, not many had interacted with or knew how to use them in their daily lives. Foodhall had to be made more experiential, Avni figured. One way to do that was to launch tasting counters, buy avocado and make guacamole seasoned to one’s taste, for instance. “The whole idea is that every time a customer walks into Foodhall, the experience should be something else. So we celebrate a lot of days. For instance, you can walk in and sample a croissant if it is Croissant Day. We need to constantly excite customers and give them reasons to come back,” she says. Avni is also planning a newer format in which customers can shop around the store and hand over the ingredients to the chef to have them rustle up a dish. “The whole ambience is experiential and luxurious, but not intimidating.”

Luxury is a key theme in Avni’s strategy for Foodhall. She is fully aware that not everyone is her customer. “It is the only format in our group where we believe this. And we take some amount of pride in saying this, because Foodhall doesn’t offer deals/value in the traditional sense that other hypermarkets offer. So while we are a customer-centric company, we are not necessarily customer-obsessed.”


Avni also lays an emphasis on the way the store has been designed, with a free-flow philosophy that allows the customer to explore the space and not get caught in silos. Says Vishal Kapoor, chief design officer & concept business head, Future Group, “The consumer likes to explore. There are tasting and sampling counters for almost all products and the space is fluid. The colour scheme is blue and brown [to reflect the premium value] and not too stark and white. And Avni is involved in everything; you will find her at board meetings and at the store discussing even a small shelf problem.” Design-led thinking has been central to the Future Group as a whole, ever since Avni’s elder sister Ashni, a graduate from New York’s Parsons School of Design, joined in 2007. She currently heads Future Ideas, which studies consumer behaviour and comes out with relevant product offerings, in addition to being involved with Future Consumer Enterprise, which has a focus on food and FMCG.

Adding to the customer experience are the cafés inside Foodhall’s larger stores. “We are just trying to build experiences and influence the customers each time they walk into the store,” says Avni.

The attempt to engage with the customer also goes beyond the store—through their website and social media accounts that are updated regularly with recipes, videos, and through predictive analysis of a customer’s shopping needs.

For all this, and to steer the company to the next level, Avni has roped in an industry veteran (who she declines to name) to mentor her. “I am not scared of seeking help. Recently, I decided to look at the next phase of Foodhall and the next level of growth opportunity and relook at oneself as a leader,” she says. For now, she has her hands full with a number of ‘experiments’—cheese rooms to make fresh cheese, adding a hydroponic unit where customers can go and pluck leafy vegetables and herbs, and trying out the home delivery service in partnership with Scootsy.

With so many tasks at hand, isn’t there ever a fear of failure? Not for Avni, who has seen her father reinvent his business not too long ago. In 2012, Biyani sold off his majority stake in Pantaloons Retail to Aditya Birla Group and also divested his stakes in Future Capital Holdings to US-based private equity firm Warburg Pincus. He instead wanted to focus on core operations by relisting the fashion business under a new entity, Future Fashion, growing the FMCG business and trebling its revenues to Rs75,000-1,00,000 crore by 2021.

Says Avni, “My father always says that in his second innings, he knew what not to do. There is so much that needs to be done, the only thing we need to remember is to not repeat the mistakes.”

Tweets by @forbes_india
MSMEs will be indispensable stakeholders in India's journey towards a cashless economy: BCG Report
GST: Measures you can take in the next 10 days