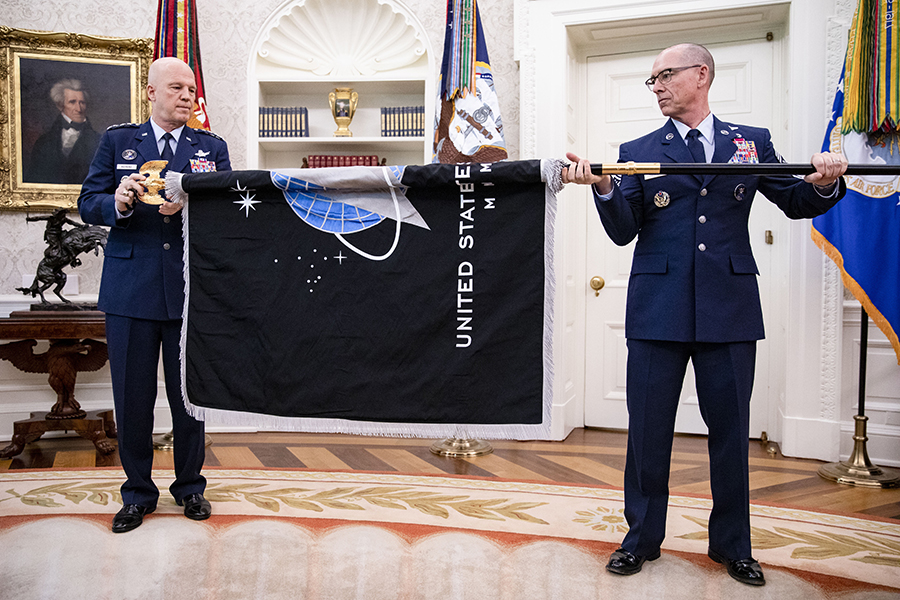 Gen. Jay Raymond, right, chief of space operations presents President Donald Trump with the official flag of the Space Force in the Oval Office at the White House in Washington, May 15, 2020. The Biden administration is inheriting the menace of Chinese antisatellite arms as well as an innovative way of trying to defuse the escalating threat.
Image: Samuel Corum/The New York Times

The stars of the new space age include not only famous entrepreneurs but a rising generation of dreamers and doers. Small companies, developing states and even high schools now loft spacecraft into orbit. But Beijing is intent on dominating the democratized space age. It is building ground-based lasers that can zap spacecraft and rehearsing cyberattacks meant to sever the Pentagon from its orbital fleets. Seven years ago, Washington seized on a new strategy for strengthening the U.S. military’s hand in a potential space war. The plan evolved during the Obama and Trump administrations and, it is expected to intensify under President Joe Biden. Here’s how the fight over space got started and how it is now playing out: 1. China is rushing to dominate space with powerful new weapons. In 2007, China shattered one of its own derelict satellites into thousands of whirling shards, making global headlines. The message to Washington was clear: Beijing was a vigorous new rival. China conducted about a dozen more tests after the 2007 foray. Some of the speeding warheads shot much higher, in theory putting most classes of U.S. spacecraft at risk. But Beijing has also sought to diversify its anti-satellite force beyond warheads. 2. Cyberattacks emerged as a cheaper way for China to take out U.S. space fleets. The insight was simple. Every aspect of U.S. space power was controlled from the ground by powerful computers. If penetrated, the brains of Washington’s space fleets could be degraded or destroyed. Moreover, such attacks were remarkably cheap compared with other anti-satellite arms. China began developing viruses to infect enemy computers and, in 2005, began to incorporate cyberattacks into its military exercises. Increasingly, its military doctrine called for paralyzing early attacks. 3. Washington is bolstering space entrepreneurs to thwart Beijing. The idea is that advances in the commercial sector can do for U.S. space forces what Steve Jobs did for terrestrial gadgets. To counter the Chinese threat, the Obama administration sought to tap the breakthroughs of space innovators as a way to reinvigorate the military. Washington pumped billions of dollars into commercial ventures like Elon Musk’s SpaceX and Jeff Bezos’ Blue Origin. The result was the development of swarms of tiny satellites as well as fleets of reusable rockets, innovations that were seen as making anti-satellite targeting vastly more difficult if not impossible. 4. The Trump administration sought an offensive edge. The Trump administration continued the Obama commercial strategy, though neither the White House nor the newly created Space Force publicly acknowledged its origin. President Donald Trump also sought to acquire offensive arms. The Space Force took possession of its first offensive weapon, which fires beams of energy from sites on the ground to disrupt enemy spacecraft in orbit. The Trump administration last year asked Congress for a start on what it called counter-space weapons, putting their expected cost at many hundreds of millions of dollars. The military’s classified budget for the offensive abilities is said to run much higher. 5. The Biden administration aims for orbital resilience. Lloyd J. Austin III, a retired four-star Army general who was confirmed last week as Biden’s secretary of defense, told the Senate that he would keep a “laserlike focus” on maintaining and sharpening the U.S. “competitive edge” against China’s increasingly powerful military. Among other things, he called for new U.S. investment in “space-based platforms” and repeatedly referred to space as a war-fighting domain. Austin cited a need for enhanced orbital resilience, as well as continued reliance on the innovations of space entrepreneurs as a means of strengthening the military’s hand. The menacing new era, he said, highlighted the importance of “improving our war-fighting capability” in outer space. And he singled out China as “the pacing threat.”

Tweets by @forbes_india
Photo of the Day: Farmers' march in Mumbai
If poor countries go unvaccinated, a study says, rich ones will pay