Maybe there's a use for crypto after all

So far, not many crypto projects have been able to solve problems that exist for people outside the crypto world, that aren't primarily about buying or selling digital assets, and that would be impossible to solve with normal, noncrypto technology 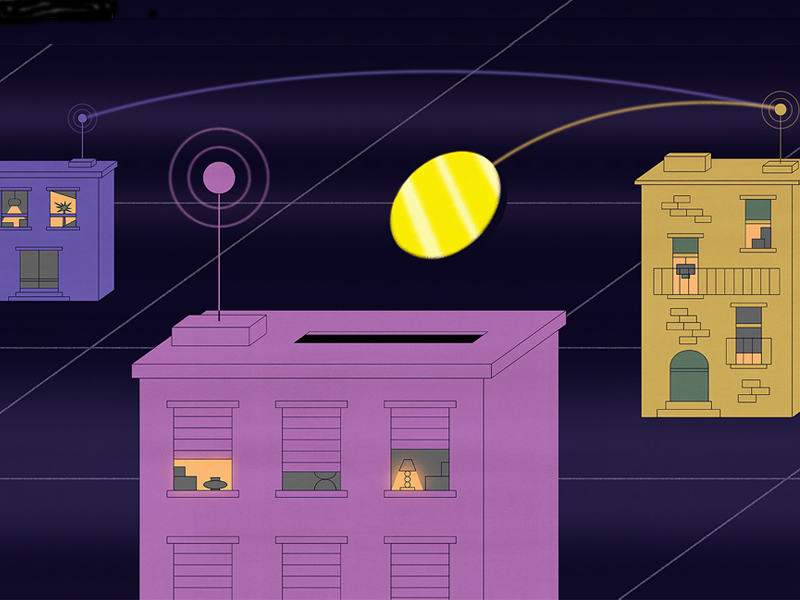 One of the most frequent questions asked by crypto skeptics is: What can you actually do with crypto, besides financial speculation and crimes?

It’s a tough question to answer, in part because most of the successful (and legal) uses of cryptocurrency so far have been in finance or finance-adjacent fields. There are plenty of crypto exchanges, nonfungible-token trading platforms and video games that involve buying and selling crypto tokens. But so far, not many crypto projects have had what I’d call “normie utility” — solving problems that exist for people outside the crypto world, that aren’t primarily about buying or selling digital assets, and that would be impossible to solve with normal, noncrypto technology.

Recently, though, I discovered one that does.

It’s called Helium. And while it’s not the most attention-grabbing crypto project out there — no cartoon apes or copies of the Constitution are involved — trying it out has helped me understand how crypto can be quite useful in solving certain types of problems.

On a basic level, Helium is a decentralized wireless network for “internet of things” devices, powered by cryptocurrency.

The network is made up of devices called Helium hot spots, gadgets with antennas that can send small amounts of data over long distances using radio frequencies. These hot spots, which cost roughly $500 apiece and can reach 200 times farther than conventional Wi-Fi hot spots, share their owners’ bandwidth with nearby internet-connected devices — like parking meters, air-quality sensors or smart kitchen appliances.

Anyone can use the Helium network, although most of its users so far are companies like Lime (which has used Helium to keep tabs on its connected scooters) and the Victor mousetrap company (which uses it for a new line of internet-connected traps). More than 500,000 Helium hot spots are in use around the world, with thousands being added to the network every day.

Here’s where the crypto part comes in: In addition to transmitting data, Helium hot spots reward their owners for participating in the network by creating units of a cryptocurrency called $HNT. These tokens can be bought and sold on the open market like any other cryptocurrency, and the more a hot spot is used, the more $HNT tokens it generates.

Helium, which was founded in 2013, didn’t start off as a crypto company. Its founders originally tried to build a long-range, peer-to-peer wireless network the old-fashioned way — by persuading people and businesses to set up hot spots and stringing them together. But they struggled to get enough participants, and the network stalled.

Frank Mong, Helium’s chief operating officer, told me that the company was running out of money in 2017 when an engineer suggested, during an all-hands Scotch-drinking session, that more people might be willing to set up hot spots if they could earn cryptocurrency by doing it.

“That incentive model, powered by crypto, actually made sense in this case,” Mong said.

So the company tore up its old business model and settled on a new one. Instead of building its network itself, Helium would make it fully decentralized and let users build it themselves by buying and connecting their own hot spots. Participants would be paid in crypto tokens, and they’d get to vote on proposed ideas for changes to the network. If the price of those tokens rose, they’d make even more money and set up even more hot spots.

The new model, which was released in 2019, worked like a charm. Crypto fans raced to set up Helium hot spots and start generating crypto tokens. They traded tips on Reddit and YouTube for increasing the range of their hot spots, by attaching them to tall buildings or putting antennas on their roofs. Some hot-spot owners claim to have made thousands of dollars a month this way, although earnings have fallen as more hot spots have been added to the network.

This, I’ve learned, is one of crypto’s superpowers — the ability to kick-start projects by providing an incentive to get in on the ground floor. Not everything could be improved by attaching itself to a cryptocurrency mining scheme. But in Helium’s case, crypto made sense as a way to encourage participation and give hot-spot owners the satisfaction of building something they owned.

I can find a lot to like about Helium. Unlike many crypto projects, it’s a real product used by real people and companies every day. The people involved in it aren’t brazen speculators, and most appear to be genuinely interested in creating a decentralized wireless network. (A cardinal rule of Helium’s 140,000-member Discord chat server is that you’re not allowed to discuss token prices.) And it’s going to become more useful in the coming months, as new kinds of 5G hot spots make it possible to send data over the network at higher speeds.

In addition, Helium’s blockchain is secured with a type of algorithm known as “proof of coverage,” which requires much less energy than the “proof of work” algorithms used by Bitcoin and other cryptocurrencies and is significantly less harmful to the environment. (Helium says its hot spots use about the same amount of energy as a 5-watt lightbulb.)

Just to make sure I’m not being bamboozled here, let’s put Helium through my normie-utility test.

Does it solve a non-crypto problem? Yes. There are millions of connected devices in the world, and connecting these devices to the Helium network is significantly cheaper than buying a cellular data plan for each device. Because of the hot spots’ long range, Helium’s network can also reach places that typical Wi-Fi and cellular networks don’t.

Is it useful for something other than speculation? Also yes. The Helium network itself has value, and although hot-spot owners can (and do) profit when the price of $HNT rises, the main way they’re making money is by adding new hot spots, not by day-trading $HNT tokens on a crypto exchange.

Could Helium have worked without crypto technology? Not really. The company tried the non-crypto approach, and it nearly went bankrupt. But adding tokens to the mix solved what technologists call the “cold start problem” — the fact that attracting the first users to a new network is often hard because the network isn’t very valuable yet.

Helium isn’t perfect. Like many crypto projects, it exists in a regulatory gray area, and users could be in for a shock if Washington decides to crack down. (Federal regulators have suggested that lots of crypto tokens may qualify as securities, which could make Helium hot-spot owners subject to all kinds of thorny securities laws.) And right now, most hot spots are in high-density cities, making it less useful to people in more remote areas.

Putting a Helium hot spot in your house might also technically violate your internet service provider’s terms of service, since it involves reselling a portion of your bandwidth. The terms of service for Comcast Xfinity subscribers, for example, prohibit using your connection “for any purpose other than personal and noncommercial residential use.” So far, internet service providers haven’t cracked down on Helium users en masse, but that could change.

“We are hopeful that the ISPs are open-minded to exploring what Helium’s all about,” Mong of Helium told me.

What I like about Helium, despite these limitations, is that it has largely avoided the hype and inflated claims that surround many crypto projects. It’s not promising to revolutionize commerce and culture, to deliver us from government censorship or to change the fabric of our daily lives. It’s just a useful piece of real-world infrastructure attached to a crypto-mining scheme that allows the whole thing to work without a big company standing in the middle.