With buildup on land and sea, Russia closes in on Ukraine 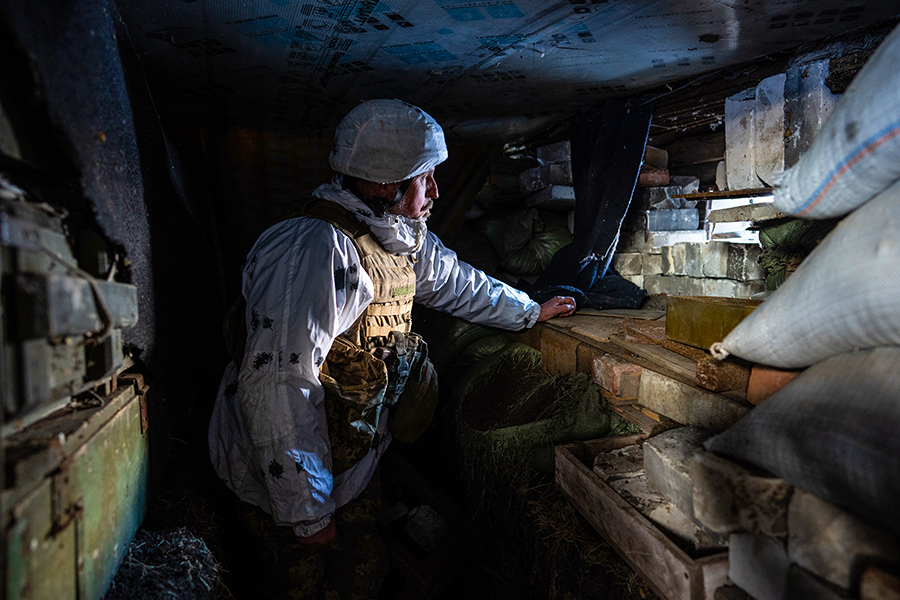 DONETSK, UKRAINE - FEBRUARY 05: A Ukrainian soldier surveys the area from his position outside of Donetsk, Ukraine on February 05, 2022. (Photo by Wolfgang Schwan/Anadolu Agency via Getty Images)

MOSCOW — Thousands of Russian troops on Thursday began 10 days of exercises in Belarus, and Ukraine warned of upcoming Russian naval drills so extensive they would block shipping lanes, as the Kremlin continued to tighten its military vise on Ukraine.
In Moscow, Russia’s top diplomat, Foreign Minister Sergey Lavrov, gave a bleak assessment of the diplomatic efforts aimed at deterring a full-scale invasion. He dismissed his talks with his British counterpart as a conversation of a “mute person with a deaf person,” asserting again that the West was not seriously addressing Russia’s most pressing concerns.
President Vladimir Putin of Russia was slightly more conciliatory, telling reporters on Thursday that negotiations with the West were continuing over Russia’s demands to reshape the security architecture of Eastern Europe. He said Russia was preparing written responses in its back-and-forth with the United States and NATO, and added that he planned to speak by phone in the coming days with President Emmanuel Macron of France.
But the intensifying Russian military activity north, east and south of Ukraine gave an ominous undertone to the diplomatic scramble. Satellite images collected Wednesday and Thursday revealed new deployments of Russian military equipment and troops in Crimea, western Russia and Belarus.
President Joe Biden, warning Americans in Ukraine to leave, told NBC News in an interview Thursday that he would not send troops to rescue remaining U.S. citizens in the event of an invasion, and risk direct conflict with Russian forces. “That’s a world war when Americans and Russia start shooting at one another,” he said.