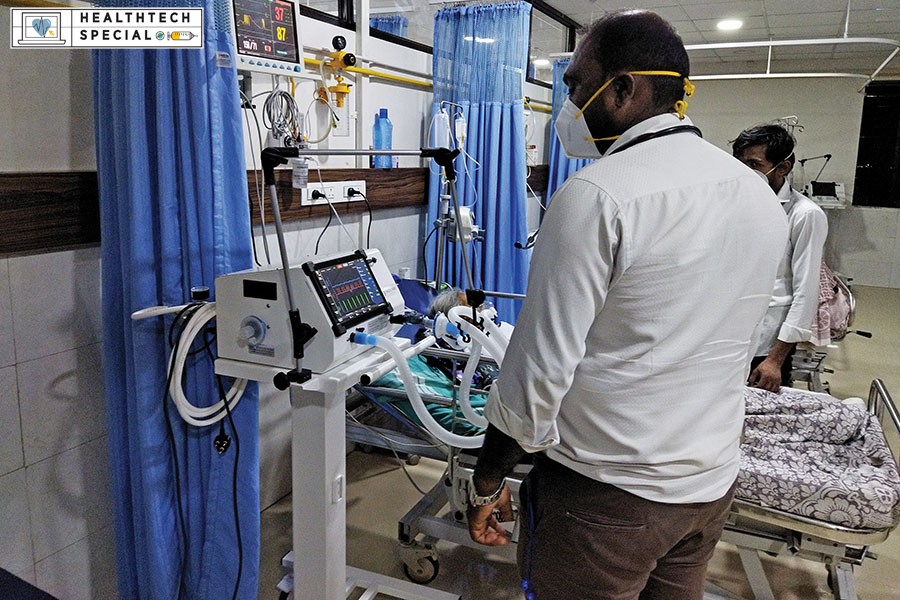 When the Covid-19 pandemic arrived on Indian shores in 2020, the country was caught off-guard on several fronts. One of them was the acute shortage of ventilators. In April 2020, the Center for Disease Dynamics, Economics & Policy (CDDEP), which produces independent and multidisciplinary research, estimated India had about 1.9 million hospital beds, 95,000 ICU beds, and 48,000 ventilators.

With Covid-19 still an unknown element across the world, and experts uncertain of ways to tackle it, ventilators emerged as an immediate way of treating critical patients. Expecting a massive surge in demand for ventilators in the coming months, the government of India, in March 2020, called on Indian companies to rapidly scale up manufacturing capacities and fill the supply gap. India Inc rose to the challenge, with established ventilator manufacturers as well as startups ramping up production capacity, inventing entirely new machines, and collaborating with other industry players in unprecedented ways.

Conventionally, ventilators are expensive and highly sophisticated machines, with high-end tertiary hospitals in big cities usually using imported variants that cost between ₹10 lakh and ₹30 lakh. Once installed, these complex machines cannot be moved around within the hospital, depending on changing requirements, and need trained technicians to operate and monitor them. These factors make it difficult for smaller hospitals, and those in smaller cities and towns, to afford and operate these machines.

The Covid-19 crisis presented an opportunity to fledgling Indian startups to take up the challenge of technological innovation and create ventilators that are at par with any world-class product, but better suited to Indian needs and conditions, and available at a fraction of the cost of imported variants. Their aim has been to create ‘made-in-India’ products of superior quality that meet global standards and certifications, while keeping them affordable for hospitals of all sizes and capabilities.

When we started in late March last year, all we knew was that there was a pandemic and the country needed to get ventilators, and we had to put together a task force that would design, manufacture and deploy a word-class ventilator,” says Srikant Sastri, who, along with Amitabha Bandyopadhyay formed the IIT Kanpur Ventilator Consortium to assist Noccarc Robotics, a young startup, in building affordable high-quality ventilators for India’s hospitals. “Looking back, it was mad to set out that ambitious a goal.”

The team’s journey to successfully make the Noccarc V310 ventilator in a record time of 90 days has been documented in The Ventilator Project, written by Sastri and Bandyopadhyay, who were the team leaders in the project. 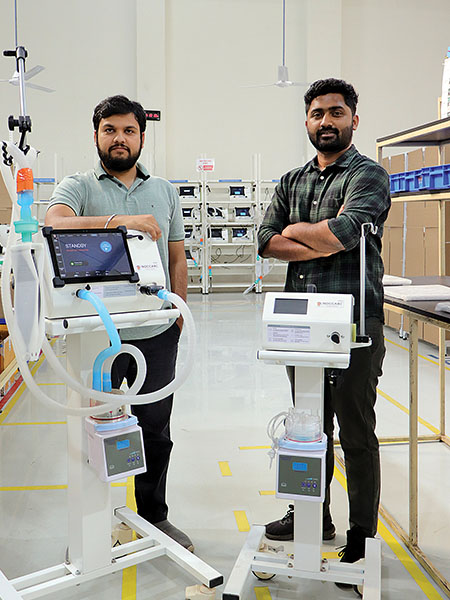 When the pandemic reached India last year, adversely impacting a wide range of industries, Pune-based Noccarc Robotics pivoted from clean tech to health tech, switching from making robots that clean solar panels to making ventilators. IIT-Kanpur graduates Nikhil Kurele and Harshit Rathore had founded the company in 2017. “The decision that we made last year was primarily driven by two factors: One, our existing business became highly restricted because of the lockdowns and we could not progress with it; and two, we realised that there was a requirement for medical technologies in the country, and we could contribute meaningfully to that as we had experience of building complex electro-mechanical products,” says Kurele.

Talking about the challenges that they faced in the process, Bandyopadhyay says, “The biggest challenge was of the supply chain, because the whole world was under lockdown, and we were trying to make a machine with more than 500 parts. The other challenge was winning the trust of the market. No doctor would want to take a chance with a machine that they don’t have full confidence in.” But thanks to the reputable mentors that the team had on board, they were able to get an audience with some of the top doctors in the country and demonstrate the capabilities of their ventilator.

“ We would have made the ventilator in 50 days rather than 90, if regulatory requirements were clear.”
Srikant Sastri, co-lead, IIT Kanpur Ventilator Consortium

Sastri adds that another major challenge was the regulatory uncertainty that they came up against. “We could have made the ventilator in 50 days rather than 90, if regulatory requirements were clear. In the absence of those, we were second-guessing at all points of time,” he says.

The government had issued an initial set of specifications for the ventilator it wanted to procure, but, he adds, these specifications kept changing. “By the time we were ready with one version of the machine, we were told that additional specs were required, so we made another version, and then another. If the specs had been laid out clearly upfront in a transparent manner, we could have done it much faster.”

Kurele recalls that further challenges lay ahead, as despite creating a ventilator that met all the specifications, orders were hard to come by. “Although we were the first Indian company to be certified by the Directorate General of Health Services [DGHS], and got certified on June 19 last year, we did not get any orders,” he says. “This was because orders for ventilators were placed even before DGHS approvals, with various domestic and foreign companies.” 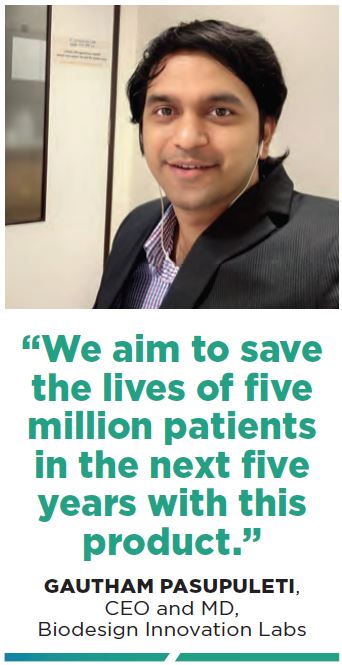 Kurele says while government specifications and certifications ensure that an equipment meets the requirements, they do not specify the quality of the product; it is up to the manufacturers to produce equipment that is of superior quality. “What we are trying to do is comply with US and EU certification standards, which will automatically raise the standard of the product,” he says. “Most medical equipment in India are imported, and hence are designed for European and US markets. Our designs keep in mind the ground requirements of India, with the quality standards of global markets.”

It was only by November-December last year that the ventilator made by Noccarc began to find acceptance and recognition among the medical community. While by the end of March 2021, the company had deployed 750 ventilators—“not in bulk government orders, but in ones and twos, to hospitals across the country who could earlier not afford imported ventilators,” says Sastri—and another 100 in March itself, it was during the second wave of the pandemic that orders picked up significantly. “Between April and June this year, we sold 2,500 units,” says Kurele. With the ebbing of the second wave, numbers have come down, and although the company has the capacity to manufacture up to 100 units a day at its Pune plant, it normally makes about 40 units a day.

The fact that Noccarc’s ventilators are being installed in some of the best hospitals in cities such as Mumbai, Pune and Delhi proves that they are being recognised for their capabilities and not simply their lower price. Noccarc has also found takers in hospitals in smaller towns such as Balaghat in Madhya Pradesh, and Surajpur in Chhattisgarh.

Bandyopadhyay says that “health care and related infrastructure has been neglected by most governments for far too long.” He says that it appears from reports that apart from the quality of ventilators procured under PM Cares, there were problems of availability of spares, timely repairs and the lack of trained technicians at hospitals. Hence, buying ventilators and other medical devices is not enough to prepare for a third Covid wave; there should be long-term efforts to develop a testing and regulatory compliance framework, domestic production of reliable spares, and training of technicians to operate medical devices.

Unlike Noccarc, which had to pivot to making medical equipment, Biodesign Innovation Labs (Bild) was already making ventilators since its inception in 2017. “We visited more than 100 hospitals across India, including primary and secondary health care centres in districts, and found that there was an unmet medical need, where there was a shortage of ventilators, which led to mortality,” says Gautham Pasupuleti, CEO and MD of the Bengaluru-based startup that manufactures respiratory support devices. “Existing respiratory equipment in the market are very expensive, and regular hospitals cannot afford them. Tertiary hospitals too had limited number of ventilators, which were manual variants, and they would refer patients to other hospitals because of the limited number of ventilators they had.”

With the aim to bridge this gap, Bild made RespirAid—a portable mechanical ventilation device—which can even be used inside ambulances when a patient is being taken to a hospital. The four-year-old startup received support from the Biotechnology Industry Research Assistance Council (Birac, a not-for-profit state-owned enterprise under the Department of Biotechnology, government of India), the government of Karnataka, Nidhi Prayas and others. In order to ramp up production during the pandemic, Bild has tied up with Remidio, a Bengaluru-based maker of ophthalmology devices.

The company aims to reduce the cost of treatment by reducing the cost of equipment. “We want to create affordable Indian products that can replace the imported products, by not compromising on the quality and going through the necessary validations and testing,” he adds. “Right now, we are working with the government of Karnataka to deploy our ventilators in Tier II and III hospitals; we have also deployed our machines in Bengaluru hospitals,” says Pasupuleti. “We have a target of saving the lives of at least 10,000 patients in the next 12 months, and 5 million patients in the next five years, with this particular product.” It is currently working on increasing production capacity to 1,000 units per month to meet demands due to an expected third wave of the Covid-19 pandemic.

The company, which was a finalist at the Ayushman PMJAY and Tata Social Enterprise Challenge, was declared Winner of Pandemic Response Prize in the Cisco Global Problem Solver Challenge in July. Bild received a patent for its product this January, and has applied for patents in the US, UK, Australia, Japan and Europe.

Pasupuleti highlights the help it has received from the Karnataka government, and how its product was referred to the state health department, which gave it the opportunity to do pilot projects. “The government’s support has been useful where getting patents and patent reimbursements are concerned. But there are more incentives for commercialisation that are required,” he says. “Getting payments are a significant challenge, and as a startup we have to plan for alternative funding. Significant funding is required to commercialise medical equipment in India, and that is missing right now. We learnt that as a medical device startup, even when we are working with the government, we need working capital to manage orders.”

Bild is currently in talks with potential investors to raise between $0.5 million and $2 million in funding. It is also looking to export its products to Africa—countries such as Tanzania and South Africa—where it has tied up with a distributor.

(This story appears in the 30 July, 2021 issue of Forbes India. You can buy our tablet version from Magzter.com. To visit our Archives, click here.)

Tweets by @forbes_india
Twitter CEO wants to go big on Bitcoin; RBI's CBDC in the works; and Crayon Data on the choices we make
"You need to sit behind the wheel to enjoy a Lamborghini"