In a span of eight years, the broadband ISP is already the fourth-largest and is set to ramp up operations across India 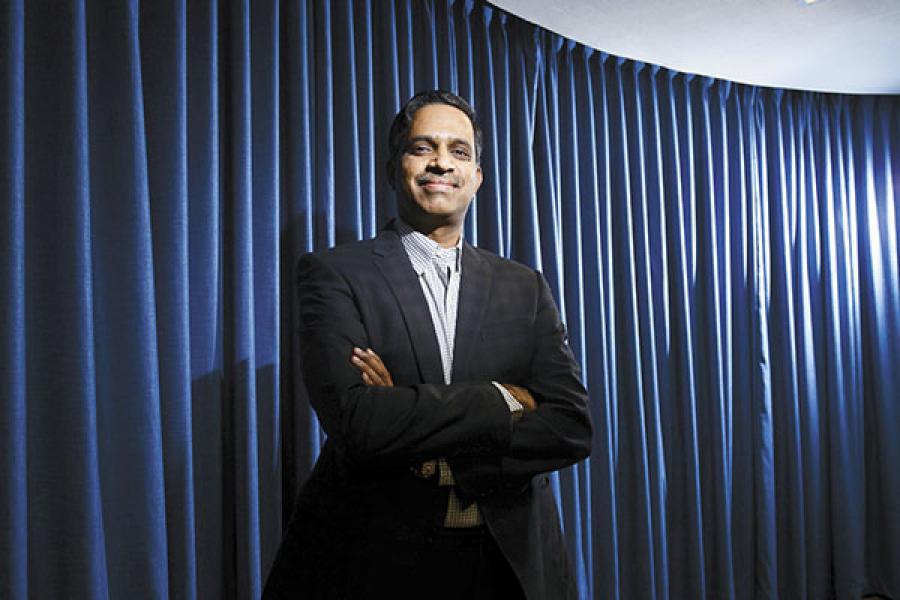 Image: Bmaximage
Bala Malladi, chief executive of ACT Fibernet, is also an FMCG veteran, having spent some 18 years at Unilever

Getting fibre to millions of middle-class homes in India’s chaotic cities is a tough ask. One has to contend with, among other things, stray cattle on the roads, dilapidated or non-existent footpaths, monsoon winds that can bring down tree branches onto overhead cables and competitors and malcontents who aren’t above pulling down your cables.

Atria Convergence Technologies, which provides fibre-to-the-home (FTTH) broadband services as ACT Fibernet, has braved all of this to become India’s fourth largest broadband ISP (internet service provider). Set up eight years ago, it is within striking distance of the No 3 spot. But its top executives have their sights set on more ambitious targets—they want ACT to be an indispensable platform, bringing everything from entertainment to home surveillance, to millions of households across India.

India is set to hold its biggest auction of wireless spectrum in September this year but the reality is that data in the country isn’t affordable for most people and any meaningful access to the internet, beyond checking WhatsApp and other not-so-data-heavy apps, requires some kind of wired connection. That is the premise ACT acted on years ago. And that is now paying off.

The people behind it
“Look at the biggest markets in any of the world’s most developed markets, and wired networks dominate economic activity,” Bala Malladi, chief executive of ACT Fibernet, tells Forbes India about why they had chosen a wired network, with FTTH technology.

According to Malladi, as everything goes digital and moves to the cloud, neither old technology such as the copper wires of yesteryear’s phones nor wireless broadband will suffice. And as consumers move inexorably from voice to data, he says confidently, “the real highway to the home is going to be built by us.”

That confidence is not misplaced. In 2009, when Atria acquired Hyderabad-based Beam Telecom, its growth was helped by the former’s 30,000 customers in the city. Today, ACT Fibernet has a 70 percent market share there with more than 550,000 connections as well a third of the market in Bengaluru, says Malladi. Their network is spread across 11 cities, including Coimbatore, where ACT launched about a year ago, Tirupati, Visakhapatnam, Vijayawada, Guntur, Eluru and Nellore. In August, ACT also entered the Delhi-NCR market, marking a significant milestone for a business that has largely operated in South India so far.

The company has over a million broadband customers and is the biggest such provider among non-telco ISPs, adding 100,000 subscribers every four months. Including the telcos, ACT stands fourth, after BSNL, Bharti and MTNL. As on May 31, the top five wired broadband service providers by number of connections were BSNL (9.89 million), Bharti Airtel (1.79 million), MTNL (1.10 million), ACT (0.99 million) and  YOU Broadband (0.55 million), according to data from the Telecom Regulatory Authority of India.

When they started, “broadband was defined as 256 kbps and we thought 1 Mbps was a good story to start with,” founder and managing director CS Sunder Raju said in February last year at an event to mark the rebranding of the company from ACT Broadband to ACT Fibernet. “In 2010, we thought we’ll break that mould and be a 5 Mbps company. Every single year, we’ve had to redefine that. We moved from 5 to 10 to 15 Mbps and today we have a 50 Mbps offering,” Raju, 59, had said. Now, the company is offering 100 Mbps speeds.

A computer-scientist-turned entrepreneur, Raju’s conviction was clear. “Society, we believe, will go through a disruptive process of re-engineering itself in the way we lead lives, and at the centre of all of that is this digital environment that will make it happen.”

The 48-year-old Malladi, an FMCG veteran with some 18 years at Unilever, has been CEO of ACT from 2008, which is also when India Value Fund Advisors (IVFA) first invested in ACT. IVFA, which made subsequent investments as well, now controls ACT along with private equity firm TA Associates Advisory.

In July 2015, TA Associates invested $200 million for an undisclosed stake. The transaction valued ACT Fibernet at $550 million, Malladi says. Around the same time, IVFA’s existing fund, called Fund 3, also exited ACT while a new one, Fund 5, bought into the company, alongside a few other investors in a consortium called Argan.

“Our investment horizon is six to eight years... with such a long horizon, it is key for us that the companies we back have enough headroom to grow over that time frame and beyond,” says Dhiraj Poddar, co-head of India at TA Associates. “We look for industry leaders in sectors or segments where we see a very large unaddressed market, with a high unmet need and work well with professional teams. ACT, for us, met all of these criteria.” 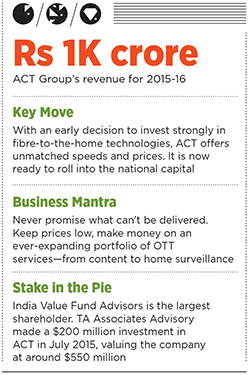 Why it is a gem
Having built the necessary fibre network, in 2010, ACT was the first to launch broadband speeds of 10 Mbps at Rs 999, at a time when the nearest competitor was offering 1 Mbps at Rs 2,000, says Malladi. Today, the company offers 30 Mbps speeds at the same rate, and has upgraded existing customers too.

What’s more, while telecom rivals severely cap upload speeds, ACT offers the same speeds for uplink as well. It is the investments in the FTTH networks that are now paying off. The company guarantees every customer a dedicated “virtual pipe” and its data plans also include a separate volume for both, meaning, as Malladi says, “when we talk of 50 Gb, it is 50 Gb for download and 50 Gb for upload.”

According to Malladi, in the last fiscal year, the ACT Group crossed Rs 1,000 crore in revenues, and year-on-year the company has seen 40-50 percent growth in both revenue and profits. Broadband comprises more than 75 percent of the business with the rest accounted for by cable television as well as IPTV. The company has been profitable for three years now and has 6,500 employees.

What makes ACT even more interesting is that even as it built its network, it has in parallel established partnerships in areas from content to technology. Today, ACT’s partners include Google and Akamai, among global tech companies, and Hungama Digital Entertainment, one of India’s biggest digital content providers.

ACT is also investing in the nascent smart home business, with a home-surveillance solution, given that it already has a pipe into the home. In time, Malladi expects ACT will become a gateway to everything from content distribution to smart home management. “We have earmarked about Rs 1,000 crore to be invested in expanding operations in the next 18 to 24 months,” he says.

Risks and challenges
“We’ve been in this business of triple play—data, voice and video. There is a huge amount of space, but it’s also a difficult market [in terms of operations],” Malladi says. The business requires getting that fibre into each and every household that wants a connection; establishing that network takes time, and continuous maintenance.

The company has its entire trunk network underground, which, again, takes time. There are also locations where the business is forced to go overhead.

Then there is the issue of technology. “We always believed we could deliver both broadband internet and video on the same fibre, but unfortunately our network topology is so unstructured that we couldn’t do that,” says Malladi. That means anyone who wants a video connection will have to put up with a second fibre line into the home.

There have also been more straightforward problems of overzealous competition “like a local cable operator cutting the cable”.

A happier problem to have is that the company has more demand than it is currently able to meet: Three times more than its current supply in cities such as Bengaluru and Chennai. “It’s a good problem to have but it is sad to see so many customers looking for the service and us not being able to meet the demand fast enough,” he says.

Meanwhile, the company marches on with its efforts to incrementally keep raising the bar for everyone. For example, “we never outsource any customer-related function. We don’t have franchisee installations,” he says.

And it’s all been on the basis of that basic vision they started with: “We don’t want subscribers to be worried about data. We want to liberate them from that mind block that ‘if I use this service more, I’ll be out of data’.”

Tweets by @forbes_india
Apple gives users cause to shoot (pictures) and run for their life
Vini Cosmetics: Smelling good