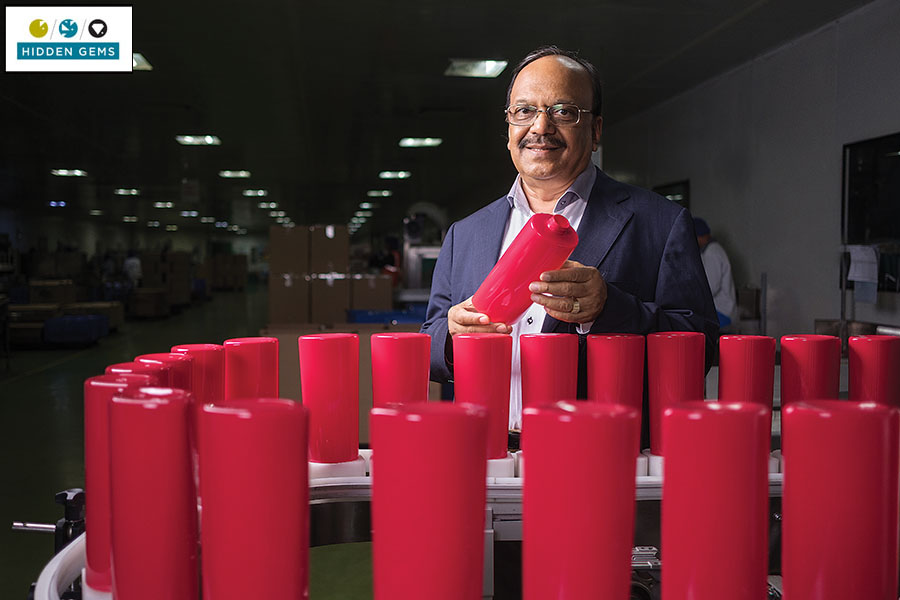 In the summer of 1977, when Vimal Kedia graduated from Assam’s Tinsukia College—about 500 kilometres northeast of capital Guwahati—matters had taken a turn for the worse at his family business. The flour mills that his family had been running for the past three decades in Tinsukia and Guwahati were sold earlier that year to pay off creditors, leaving the then 21-year-old Kedia to face a baptism by fire in entrepreneurship.

His maiden venture Vimal & Co, an umbrella manufacturing business that he set up in Guwahati later that year, did brisk business in the rain-soaked states of Assam, Manipur and Nagaland. But, it wasn’t until another four years that Kedia found his true north.

Things changed on a fortuitous trip to Delhi in 1981, when an acquaintance introduced Kedia to plastic manufacturing. The clanking of state-of-the-art machines in a factory, a far cry from Kedia’s modest workshop, had him hooked. “I saw machines taking out polythene tubes. Raw materials were introduced from one side and finished products emerged from the other end. To me, it was a miracle,” recalls Kedia, now 62, of his first brush with plastic manufacturing. 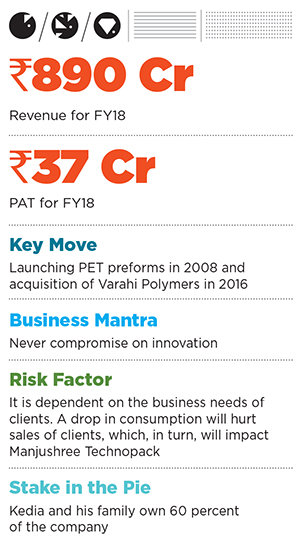 It took him another two years to replicate the miracle. In 1983, armed with a ₹10 lakh loan from Punjab National Bank, Kedia kickstarted Manjushree Plastics, a manufacturer of flexible packaging materials like plastic pouches and sheets in Guwahati. His first clients were the tea estates of Tata, Assam Co, Goodricke, HUL and Duncans, among others, to whom he had sold his Rhino brand of umbrellas earlier.

Three and a half decades since then, Manjushree Plastics (now Manjushree Technopack) has become a formidable force in the plastic packaging industry.

The firm, which clocked profits of ₹37 crore on revenues of ₹890 crore last fiscal, has aced the art of rigid packaging, especially PET preforms, giving multinationals such as Austria’s Alpla, UK’s Kempco and homegrown Sunrise Containers a run for their money. (PET, or polyethylene terephthalate, is the polymer commonly used in making plastic bottles or packaging soft drinks.) “Our target is to grow to 2 lakh tonnes of plastic processing by 2020 from the current 1.5 lakh tonnes, and grow the topline to ₹2,000 crore,” says Kedia.

The goal looks audacious but Kedia, managing director at the company, exudes confidence. “Until now, we have met all the targets we have set internally,” he adds.

Until 1994, Manjushree Plastics was a modest outfit operating from Guwahati with an annual turnover of about ₹3 crore. While it was holding fort against rivals Uflex, Huhtamaki PPL and Paharpur 3P, Kedia realised that the confines of Assam couldn’t fuel the fire in his belly.

Keen on leveraging the spurt in domestic consumption in a post-liberalisation India, Kedia relocated to Bengaluru (then Bangalore) in 1994. The following year, the company listed on the Calcutta, Ahmedabad and Guwahati stock exchanges and, purely on a lark, renamed itself Manjushree Extrusions. A follow-on public issue was on BSE. A new plant on the outskirts of Bengaluru, which would also manufacture PET bottles, started operations in 1996.

Along with a wider footprint came diversification. “Between 1996 and 2008, it was all about expansion to various kinds of bottles. The tea business was intact and we entered mineral water [packaging], candy jars, etc,” says Kedia. “We introduced rotating caps for HUL for dust tea dispensers, then we made jug jars. We used to design bottles, make prototypes, produce small lots for trials and sampling. We never shied away from investing in research and design.”

By 2008, the company’s annual sales had soared to ₹80 crore, but it had not realised its full potential yet. Then, the cola wars came to his rescue.

As Coca-Cola and PepsiCo stepped on the gas, Kedia spotted an opportunity in supplying them PET preforms. These are plastic tubes with a neck, which can be blown to a desired size at the beverage makers’ facilities.

Not someone to rest on past laurels, Kedia is now focusing on acquisitions as part of the expansion strategy

To sound more like a packaging business, the company changed its name to Manjushree Technopack, and floated a follow on public issue in 2008 to raise ₹36 crore. The money was channelled into buying equipment for manufacturing PET preforms.

Kedia says the foray into PET preforms was one of the two game changers for the firm. The second came about eight years later, in 2016.

A year earlier, Manjushree Technopack had delisted from all the four exchanges and raised about ₹250 crore from private equity firm Kedaara Capital to accelerate growth. But there was a chink in Kedia’s armour—the company did not have a manufacturing facility in the north. “This was a big drawback. Companies prefer vendors to have multiple units, both in the north and south. Earlier, logistics cost to North India was low, but it increased with the rise in fuel price. We needed to be closer to the clients as in our business, logistics account for 7-10 percent of the cost,” says Kedia.

In November that year, Manjushree Technopack bought Delhi-based Varahi Polymers for about ₹250 crore with a loan from the State Bank of India and ICICI Bank. It not only gained four plants owned by Varahi in Pantnagar in Uttarakhand, Baddi in Himachal Pradesh and Noida, but also a host of clients like Reckitt Benckiser, Dabur, Bajaj, SC Johnson and Patanjali.

As consumption in India continues to grow, packaging companies like Manjushree Technopack are poised to make merry in the years to come. “The sector has grown around a change in consumption profile. More and more food is being packaged because it is perishable or for convenience. Also, non-food FMCG is reaching smaller towns and cities, especially categories like personal care, home care, etc. The same is the case with pharma companies. With the increase in consumption, the complexity of packaging has also increased. That is where Manjushree Technopack comes into play,” says Ankur Bisen, associate vice president of retail and consumer products at management consulting firm Technopak Advisors.

Yet, Kedia isn’t the one to rest on past laurels. These days, he is busy drawing up the company’s expansion strategy. Acquisitions, he says, will be a big part of his playbook. “Else, we will not be able to grow that fast. We will lead the assault from the front,” Kedia tells Forbes India.

He isn’t too worried about the regulatory crackdown on plastics either as it seeks to ban only single-use plastics like carry bags and thermocol. Manjushree Technopack isn’t into either of the two categories.

The Centre is also contemplating a ban on multilayer plastics—plastics used to pack condiments and snacks, chocolate wrappers and gutka wrappers—which are not recyclable. Manjushree isn’t into this business either.

PET bottles, which Manjushree manufactures, are recyclable and can be decomposed into polyester fibre used in making mattresses and pillows. “Because of the regulations, we expect our business to increase as a lot of flexible packaging will move to rigid packaging. Rigid packaging hasn’t been banned and is recyclable. Hence, the PET bottle market is expected to grow,” says Kedia.

Which means, the company that once made a killing from the cola wars is yet to lose its fizz.

Tweets by @forbesindia
Head Infotech: Acing the game
Are you addicted to power?