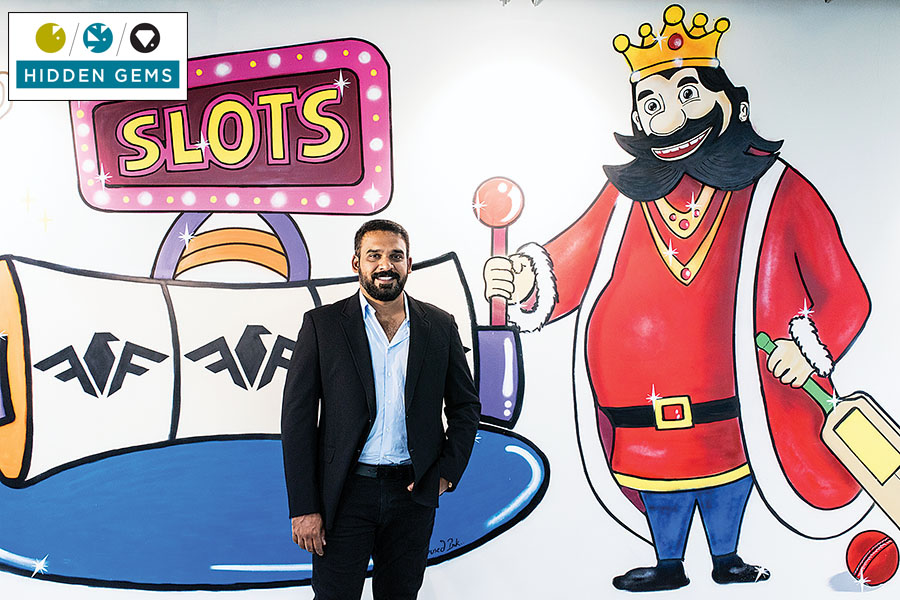 Deepak Gullapalli, CEO, Head Infotech, intends to diversify and build new products in the gaming sector; Image: Harsha Vadlamani for Forbes India
Whether it is Google Play Store or Apple’s App Store, a vast majority of the millions of apps they host are games. From puzzles and virtual shootouts to Candy Crush and racing car simulations, online gaming applications are among the most popular and prolific. And even as budget-friendly smartphones and cheap data drive up demand for such games, competition is intensifying in this low-barriers-to-entry market.

Amid this clutter, Hyderabad-headquartered Head Infotech, which operates online rummy portal Ace2Three, stands out. It has a 10 million-strong user base, bagged $73.7 million (₹474 crore) in funding from a consortium of investors led by Canadian firm Clairvest in April 2017, and posted a profit of ₹65 crore on revenues of ₹238 crore last fiscal.

In 2005, Deepak Gullapalli was a product manager at Ivy Comptech, a Hyderabad-based company that develops software for the online gaming industry. This was when personal computers and consoles still ruled the gaming market and smartphones were only just beginning to emerge. 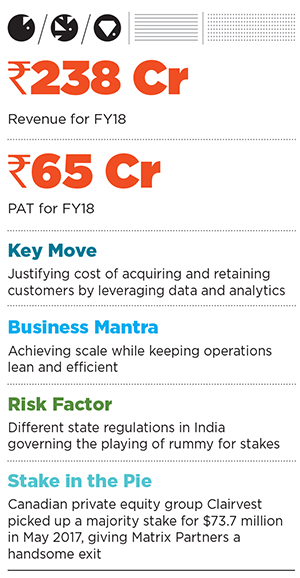 “I realised rummy had huge potential in India. Socially and culturally it is part of our psyche. I personally have been playing the game since my childhood,” says the 37 year old. (Also, unlike poker, there was clarity on government regulations around rummy: In 1968, the Supreme Court recognised it as a “game of skill” rather than luck or chance, and allowed the game to be played with stakes.) Sniffing an opportunity, Gullapalli quit his job in December 2005, rented a computer and hired two software developers to build a website that would allow users to play rummy online.

By 2007, their initial bootstrapped product, Ace2Three, which allowed users to play rummy without stakes, was launched. But business was slow to pick up because, although the game was designed for laptops as well as smartphones, the penetration of the latter was limited, as was the access to data. “There were multiple reports in 2007-08 that predicted the internet was going to explode, so we carried on,” says Gullapalli, CEO of Head Infotech. Two years later, Head Infotech went live with a version that allowed for real money to be wagered, while charging players a commission on the games played; when not played for money, the service is free. Today, of its 10 million users, 5 percent pay and play.

In 2010, Matrix Partners bought a minority stake in Head Infotech for an undisclosed amount. “From our interactions with Deepak, we were convinced of his vision and his ability to execute,” says Rajinder Balaraman, vice president of the Mumbai-based venture capital firm. Rightly so, for early last year, Matrix exited its seven-year investment with returns of 20x, when Toronto-headquartered private equity group Clairvest, which has backed other global gaming companies, including casino operators across North America, bought a majority stake in Head Infotech. “It’s a world class organisation,” says Michael Wagman, president and managing director at Clairvest. “From technology and marketing to operations and management.”

But while the opportunity in the online gaming space is huge—KPMG predicts that the industry in India will more than triple in size from the current $290 million to $1 billion by 2021—and Head Infotech has an early mover advantage, creating a sticky community of users is a key challenge. Emerging technologies, low barriers to entry, and a rapidly growing local developer ecosystem have given Indian users access to multiple online gaming options.

Consequently, companies have to spend more money on attracting and retaining players. While Gullapalli declined to give Head Infotech’s cost of acquiring customers, he says although it is high, the company draws on big data and predictive analytics to not just acquire customers, but also understand their needs and preferences. “This keeps them on the platform and gives us a better return on investment,” he says.

The numbers add up to his claim. In FY17, Head Infotech earned ₹99 crore in profit on revenues of ₹271 crore, while its closest competitor, the Tiger Global-backed PlayGames24x7, which runs online portal RummyCircle with 12 million registered users, notched up ₹65 crore in profit on much higher revenues of ₹385 crore. “We spend money more efficiently. That is our trade secret. We also have a much leaner team,” says Gullapalli.

How then did profits dip from ₹99 crore in FY17 to ₹65 crore in FY18? “The Telangana ordinance,” Gullapalli is quick to point out. In late 2016, the state’s police filed a case against Head Infotech after receiving a complaint that it was duping players by manipulating its software. The company fought the case, and won, but not without heavy litigation expenses. Following the case, Telangana, which earlier accounted for 40 percent of Head Infotech’s revenues, banned the playing of all kinds of online games, including rummy. In fact, although the Supreme Court has declared the card game legal, different states have different regulations, prompting Head Infotech to stop operations not only in Telangana but also Odisha and Assam. Despite this setback, the company claims to have regained lost ground and retained its Ebitda margins.

Aside from its mainstay Ace2Three, a subsidiary further powers Head Infotech’s growth; through WittyGames India, the company develops ‘social games’ that are free of charge and not played for money. “We are focussed on innovation, not replication. Our offerings are inspired by local community games played across India,” says Gullapalli of games like In-Between, a simple three-card game inspired by the card games played at street corners across the country which was launched late last year. Ad revenues support this business. The company also picked up a majority stake in fantasy gaming platform Fanfight for $1 million this March.

“Over the next three to four years, we aim to diversify and build new products in the gaming sector,” says Gullapalli. Localisation of games to suit Indian players, innovative revenue models and inorganic growth will be part of his play. And just like a good rummy player, he’ll be strategising to make the right moves at the right time.