Situated on India's eastern coast, it has emerged as a prominent deep water port for large cargo ships 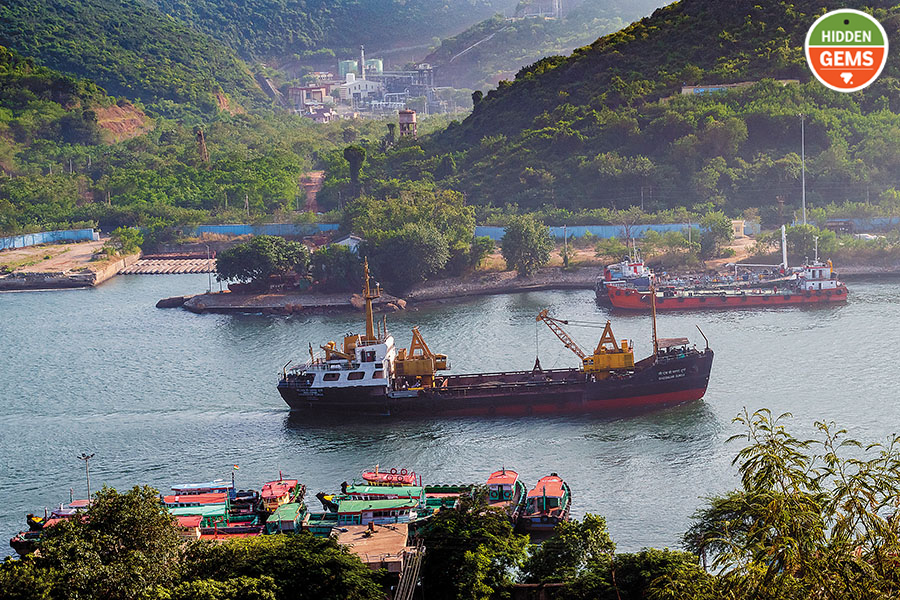 Over the last decade, 30 km off the coast of Visakhapatnam, the outline of a vast infrastructure project has taken shape. Gangavaram Port has emerged as a prominent minor port on India’s eastern coast. Its 60 million tonnes in installed capacity is more than half of the 110 million tonnes that Kandla Port, the country’s largest handled last year; it is now rapidly scaling up.

At the several terminals of Gangavaram Port, ships laden with coal, limestone and fertilisers deposit their cargo without any of the delays associated with larger Indian ports. A dedicated railway line connected to the Howrah-Chennai route ensures that the cargo  reaches end customers quickly; finished steel makes up its main export.

It’s one of India’s few private sector port success stories and is testament to how a methodically built business backed by patient capital can generate significant returns for investors. Its media shy owner DVS Raju ensures that the company is rarely spoken about. He declined multiple interview requests from Forbes India.

“We derive great comfort in the way DVS Raju and his team run their business: Their integrity, business built on strong passion, and deep understanding of the port business. All these aspects have led them to see it grow from a nascent stage to a port of global scale,” says Vishal Mahadevia, managing director and India head, Warburg Pincus, which owns a 31.5 percent stake in Gangavaram Port. The Government of Andhra Pradesh owns 10.39 percent and DVS Raju and family own 58.11 percent. A seasoned entrepreneur, Raju was earlier chairman of Visual Soft Technologies, an IT company.

It was in 2003 that Raju secured a concession from the Andhra Pradesh government to develop a deep water port at Gangavaram. The location, with its deep draught, provided a unique advantage. Once developed, large ships of up to 200,000 dead weight tonnage (DWT) could enter and exit the harbour. This meant that large customers like the Vizag Steel Plant could import coal on larger ships, thus reducing the per-tonne cost, while the port could charge higher docking charges for the ships. The port also ensured that there were enough berths available round the clock, and marketed the fact that ships don’t have to wait. 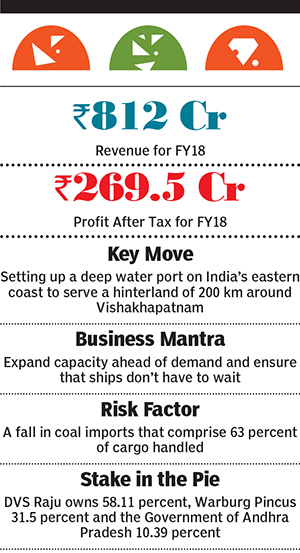 In a short period of time Gangavaram Port was able to draw away significant business from the nearby Visakhapatnam Port that is run by the central government. The port also has a natural monopoly, as Kakinada Port is too far south.

According to an analyst who tracks port companies, but declined to be quoted, Gangavaram Port benefited significantly due to the inability of domestic coal production to keep pace with demand in the last five years. He pointed out how little control port companies have over the pace of growth in cargo. The only areas they can control are making sure that vessel operators are served promptly and capacity is expanded ahead of demand. The next round of capacity expansion will probably include an LNG terminal to cater to the growing gas imports to cater to city gas distribution companies.

At present, coal imports comprise 63 percent of cargo handled and a decline in imports could pose a risk. Total imports of all types of cargo rose by 25.78 million tonnes in FY18 to 15.08 tonnes in the first half of FY19. Revenues for FY18 rose 29.6 percent to ₹812 crore, while profit after tax rose 196 percent to ₹269.56 crore. The company has been able to prepay its loans out of internal accruals.

The port’s success is also a testament to how patient capital with the right entrepreneur can work wonders. Warburg, which has stuck with the investment for over a decade, says it is in no rush to exit and is happy, for now, with the dividend payout it receives.

“What started as a green field project with nothing on the ground, has over time developed into a world class project becoming the deepest and one of the most efficient cargo-handling ports in India offering competitive tariffs, better turnaround time for vessels, great connectivity, in addition to many infrastructure facilities,” says Mahadevia.