India and the two QUADs: Importance of the grand coalitions to counter China's growing influence

In the days to come, the global policy and economy could witness various moves to counter China's unabated quest for domination. The rejuvenation of the Indo-Pacific Quad and the emergence of the second West Asia Quad are welcome initiatives from an Indian standpoint 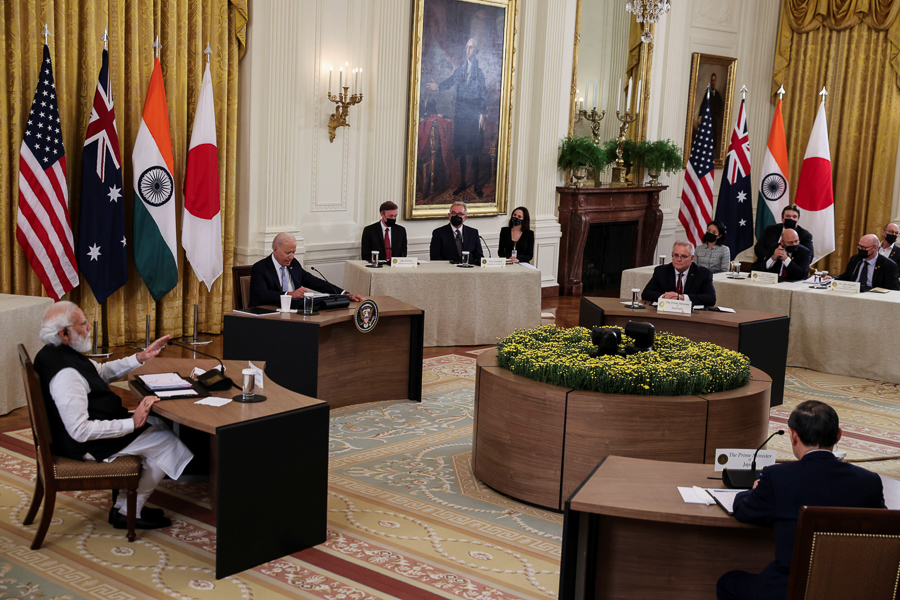 Country-wise groupings or coalitions are products of contemporary political economy and strategic reality and, thus, often undergo cyclical movements of highs and lows. A group that was very active yesterday may turn into inactivity and oblivion today. The reverse could also be true. At the moment, the ‘Quad’ seems to be the flavour of the season.

In terms of its genesis, the Quadrilateral Security Dialogue (popularly called Quad) emerged as a strategic dialogue between the United States, India, Japan and Australia in 2007. The Quad was accompanied by a significant joint military exercise, called Exercise Malabar. The coalition was widely conceived as a response to increased Chinese economic and military power. The Chinese government responded to the Quad by issuing formal diplomatic protests to its members. Over the next ten years or so, the Quad went into inaction, primarily reflecting Australia’s somewhat ambivalent strategy towards China.

Fast forward to Sept 2021. Three weeks after the US President Joe Biden hosted the heads of government of India, Australia, and Japan—the ‘Indo-Pacific Quad’—at the White House on September 24, 2021, came the news that the foreign ministers of India, Israel, and the UAE, and the US Secretary of State had a virtual meeting on October 18, 2021. This second ‘West-Asia Quad’ seemed more focused on economic matters. At this meeting, the US Secretary of State Anthony Blinken stressed common interests the four countries had in the areas of “energy, climate, trade, regional security” while the Indian Foreign Minister S. Jaishankar emphasised economic cooperation and the fight against Covid-19. Thus, what was initially a pure strategic alliance is expected to develop into a more holistic partnership.

The two countries common to both the Quads are India and the US, signifying a deepening of cooperation between the two countries on the matters affecting India’s near-abroad—the Indo-Pacific and West Asia. But what could the two Quads hope to achieve through greater political and economic cooperation, and what does it portend for the immediate and medium-term strategic and economic challenges that India faces?

Greater strategic cooperation with the US is critical to India, especially in the context of recent developments in India’s relationship with China and Pakistan. On October 17, 2021, the thirteenth round of commander-level talks between India and China broke down after China refused to reach an agreement to mutually disengage forces from the Hot Springs region in Ladakh. Both India and China have significantly increased their military capabilities along their shared border. Interestingly, the 2020 clashes and the subsequent troop build-up, are not just a border issue for the two countries. The two governments are also acutely aware of the need to show strength and resolve against external threats. Especially, at a time when both countries are celebrating important anniversaries of historically significant events—the 75th year of Indian Independence, and the centenary of the founding of the Chinese Communist Party this year. For the Chinese President, Xi Jin Ping, the coming year is also important for personal reasons. He is expected to get an unprecedented third term as leader of the Chinese Communist Party—and China’s President—at the 20th Party Congress, likely to be held in October/November 2022. Any sign of compromise on border issues—when China’s economic growth is once again slowing down—could weaken his position domestically.

An improvement in India-China relations seems unlikely until early 2023, at the earliest, and in such an environment, support from the Indo-Pacific Quad could be critical for India.

With the backdrop of the recent developments in Kashmir, the second ‘West-Asia Quad’ becomes important. Pakistan-supported terror groups have recently stepped up a campaign of attacks on innocent civilians, especially those from other states in India. Is this sudden deterioration of the situation in Kashmir, after a period of relative peace following the abrogation of Article 370 in 2019, related to the US withdrawal from Afghanistan and the subsequent takeover of the country by the Taliban? While any definitive analysis could be difficult, is it not reminiscent of the Pakistan-sponsored militancy that broke out in Kashmir in early 1989, soon after the erstwhile Soviet Union withdrew its forces from that country? Such questions seem to be blowing in the wind.

The two Quads are also important for India from an economic perspective. Since the Covid-19 pandemic, forces of globalisation are undergoing interesting twists and turns, and multi-national corporations are contemplating adopting a “China plus one” strategy in terms of global supply chain management. Seen in this context, these Quads have significant economic potential. Countries in the two Quads have emerged as important trade and investment partners of India.

There is scope for further enhancing economic ties between these nations. As far as the Indo-Pacific Quad is concerned, in 2020, their combined population was nearly 24 percent of the global population. Their combined GDP (at purchasing power parity) was nearly 28 percent of global GDP. Trade between these four Quad countries exceeded $440 billion in 2018, with nearly $6 trillion in trade with the rest of the world. Four countries in the West-Asia Quad with 23 percent of global GDP and 22 percent of the global population also wield substantial economic muscle. Free Trade Agreements between members of these Quads could further strengthen political and economic ties between them.

In the days to come, the global policy and economy could witness various moves to counter China’s unabated quest for domination. The rejuvenation of the Indo-Pacific Quad and the emergence of the second West Asia Quad are welcome initiatives from an Indian standpoint; after all, these initiatives question China’s hegemony, and at the same time could have a favourable impact on India’s trade, investment, and growth.