Finance Is The Calling Card For Dabur Scion Mohit Burman 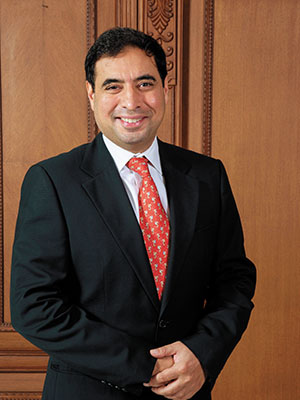 Mohit Burman
Director, Dabur India Ltd
Age: 44
Education: MBA (finance), Babson College, Boston
How he is changing the way the company works: Mohit is looking at joint ventures to expand his business and roping in professionals to manage investments. His brother and he are eyeing new avenues, especially the health care and financial sectors


Mohit Burman, director of the Rs 7,000-crore Dabur and chairman of Aviva Life Insurance, may be the face of the Burmans’ financial services business, but the 44-year-old insists he is only running it on behalf of his illustrious family.

A rule of thumb in the Burman clan is that the person who has a business idea should launch and run it. Other relatives can then decide if they want to invest in the business. Mohit handles the family’s financial services arm, but his father, uncles and cousins have a stake in the investments he makes. “If the amount is Rs 5-10 crore, I do it in my personal capacity, but I couldn’t have invested Rs 2,000 crore in Aviva on my own,” he says.

The values and traditions that the Burmans have built and upheld for five generations underscore his actions—in work and in play. And there’s no dearth of role models. It was under his forefathers that Dabur grew over 130 years to become India’s largest producer of Ayurvedic medicine and a leading fast-moving consumer goods company. He has imbibed many of Dabur’s values from his uncle, the late Ashok Burman, who was chairman of the company, and under whom he worked for a decade. “I interacted with PC Burman (his grandfather), RC Burman (granduncle), and my father VC Burman a lot, but in terms of teaching me career moves, it has to be my uncle,” says Mohit.

That said, it was his maternal grandfather, businessman HL Malhotra, who had the greatest impact on his life, especially in his formative years. When Mohit was 10, he moved to London to live with his mother’s parents. “My grandmother was ill, so my mother (Monica) decided to move there with me and my younger brother (Gaurav) for a while,” says Mohit, who boarded for a time at the preparatory Papplewick School, Ascot, UK.

His grandfather, who ran Harbans Lal Malhotra & Sons, was a “pioneer in the razor blade industry”. “I learnt the basics of doing business from my grandfather.” After graduating with a bachelor’s in business administration and economics from Richmond upon Thames College, London, in 1989, he wet his toes in the real estate business before moving to the US for an MBA in finance from Babson College, Boston. But he was running short of time. The pressure from his family to return to India (and Dabur) was increasing with each passing year.

Duty to family is ingrained in Mohit’s DNA. “I was the eldest son, so it was understood that I would join the family business,” he says. He was 23 when he returned to Delhi in December 1993. Apart from holiday visits, he had been away from the country for nearly 15 years.

At the time, Dabur was going through a transformation. After more than a century of running as a family-owned business, the company was preparing to go public. He describes the experience as an eye-opener. In 1994, a year after his homecoming, Dabur became a public company. By then, Mohit was working in the purchase division.

“[Until then] it was a close-knit family business. We would all have lunch together. That’s how close we were. It was only after we floated an IPO that we started to get reorganised,” he says. Dabur had roped in consulting firm McKinsey & Company, which advised the Burmans to relinquish their positions and hire a new team led by a professional CEO. Ashok Burman resigned from his position as chairman of Dabur. Today, some family members hold key positions, but they have little say in the day-to-day running of the business.

While the restructuring was in process, Mohit, his brother and his cousins—all of whom have inherited the Burman entrepreneurial streak—began hunting for new business opportunities. Mohit chose to specialise in finance. He took over the now-defunct Dabur Finance Ltd. However, he quickly realised that the Burmans would need outside expertise. They acquired this by way of joint ventures (JVs). “We tied up with 5-6 companies and some of those JVs still exist,” he says. The family bought a 10 percent stake in Universal Sompo General Insurance Company, which it continues to hold. In 2004, he bought a 25 percent stake in Fidelity Fund Management—the Fidelity group’s Indian asset management company; he exited in 2007. Three years ago, he invested in Portugal-based Espírito Santo Securities. (Though the parent company Banco Espirito Santo is going through a financial crisis, its Indian arm is unaffected.)

In 2001, Mohit ventured into the life insurance sector in a JV with ABN AMRO to market the bank’s insurance products. The next year, he partnered with UK-based Aviva Life Insurance, and brought it to India. The family holds a 74 percent stake. It turned profitable for the first time in 2011 and is among the top 10 private players with a market share of over 3 percent. (UK partner Aviva plc is looking to exit the firm.)

He also launched a $100 million private equity fund, Elephant Capital, in 2007 with Gaurav and invested in companies such as Amar Chitra Katha (which publishes comics), Mahindra Forgings and Nitco Ltd (premium tiles).

Mohit may have immersed himself in the world of finance, but he’s held on to a part of his childhood in England: It was during his years in the UK that he developed his love for “all kinds of sports”, particularly cricket. “When you’re from India, everyone thinks you are a Sachin Tendulkar. But it’s only when you go on the field and bat do you realise that you’re not,” he says. While Mohit knew that he did not have the makings of the next Tendulkar, he enjoyed wielding the bat. “I wasn’t a very good bowler because I didn’t like to run.”

He translated his passion into a business. It began with the launch of the Indian Premier League (IPL) in 2008. “I felt it was worth investing in it purely for my love for cricket,” he says. At the time, IPL’s ensuing success was still in question.

Mohit’s idea appealed to the family who invested Rs 100 crore for a 46 percent stake in the Mohali-based team, Kings XI Punjab. (Co-owners include actress Preity Zinta, industrialist Ness Wadia, and Karan Paul of the Apeejay Surrendra Group.) The Burmans have recorded cumulative losses of Rs 60 crore from this investment. “In sports leagues, the governing body and the players make money. It is difficult for individual teams,” says Mohit.

He has also invested Rs 20 crore in the Mumbai franchise of the Hockey India League and Rs 1-2 crore in the Pune franchise of the Indian Badminton League. “The idea is to promote different kinds of sports. We are not going to go bankrupt by doing this.” (Gaurav shares his passion and owns a minority stake in the Formula One, ‘Lotus F1 Team’.) In his sports businesses, too, he follows the Dabur culture of roping in pros. “We are more like quasi investors,” he says, adding that everyone is constantly bouncing ideas off each other.

There was a time when the discussion of business opportunities was done through a formal family council, which met every quarter. Now, says Mohit, it’s more informal. “We sit in the same building [Punjab Bhawan in Delhi], so we just walk across and speak to each other.” It’s this support that has spurred Mohit, his brother and cousins to explore new avenues.

As is evident, now that they are no longer tied down with the actually running of Dabur, the younger family members are testing business ideas. Gaurav, 42, recently stepped down from the board of Elephant Capital and entered into a JV with UK-based Healthcare at Home to introduce personalised, at-home critical care services in India.

His cousin Amit has scripted his own success story in the restaurant business. He is credited for Dabur’s entry into the processed foods segment with the setting up of Dabur Foods Ltd, and has invested in restaurant chains like Street Foods of India, Punjab Grill and Zambhar.

These are exciting times for the new generation of Burmans. Mohit looks forward to new ventures and new business opportunities, and when in doubt, he remembers his uncle’s advice. “He [Ashok Burman] would always tell me to take my time before making a decision because in the beginning, everything looks rosy. Now, I say the same thing to my brother.”