Achal Bakeri: The billionaire who never lost his cool

Achal Bakeri pulled Symphony from the rubble of bankruptcy and rebuilt it into the world's largest air-cooler manufacturing company. Here's how he did it 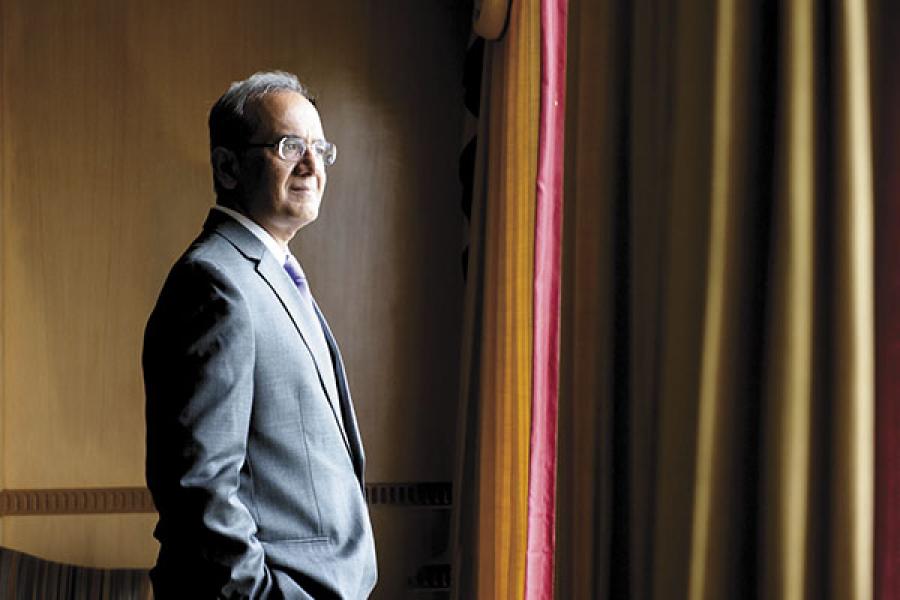 Achal Bakeri, 55, still remembers the first summer of sales at Symphony. It was 1988, and he had sold his entire batch of air-coolers in his hometown of Ahmedabad, Gujarat. Premium air-conditioners were retailing for about Rs 35,000 apiece and air-coolers for Rs 2,000 each. Symphony’s product, with its modern design and superior performance, was priced at an affordable Rs 4,300. Much to his surprise, Bakeri sold his entire stock of 1,000 air-coolers before the end of summer. It helped that temperatures in Ahmedabad had crossed 40° Celsius that May.

Bakeri had returned to India the previous year after completing his Master’s in business administration (MBA) at the University of Southern California in the US. He had planned to enter the family’s property business that goes by the eponymous Bakeri, having done his MBA in real estate finance. But he quickly changed his career trajectory after he got an epiphany that summer.

His family had recently moved to a new house in Ahmedabad, parts of which couldn’t be air-conditioned as they had long passages and high ceilings. Architects suggested the Bakeris use air-coolers as an economically viable way of combating the heat. These wallet-friendly products use evaporation of water to cool a room and require less energy than air-conditioners. “The performance was great, but the product was an eyesore and we had to camouflage it,” recalls Bakeri.

It prompted him to set up an air-cooler company to see if there was a market for efficient and well-designed models, and started Symphony with a seed capital of Rs 7 lakh, which he got from his family. While he designed the air-coolers himself—he wanted a sleeker look and feel in contrast to existing local models—he outsourced the manufacturing process. “The initial three years were a dream,” he says.

After selling a thousand coolers in the first year, Symphony sold 7,000 in 1989. The next year, Bakeri started selling units, not just in Ahmedabad but also in other parts of India, and was able to increase his sales to 21,000 units. He found a comfortable niche for Symphony, and in 1994, he listed it on the Bombay Stock Exchange. For a while, the company seemed to be on a steady course, running practically on autopilot.

But the business soon started to falter because of a series of unfortunate and unsuccessful decisions. The next 14 years were the toughest in Bakeri’s life. “We spent seven years digging a hole and then seven years getting out of it,” he says. In 2001, the company filed for bankruptcy and approached the government’s Board for Industrial and Financial Reconstruction (BIFR).

It was only in 2009 that Symphony emerged with a fresh lease of life. Without the experience of seeing his company crumble and pulling it back from the brink of ruin, it’s unlikely that Bakeri would have created the world’s most valuable air-cooler manufacturing company with a market cap of a billion dollars. Or find himself as a new entrant on the 2015 Forbes India Rich List at rank 89: Bakeri, who is chairman and managing director of the company, is worth $1.26 billion.

He is bullish about the future, but refuses to put a figure on how fast his company can grow. “I wouldn’t have imagined in my wildest dreams that we’d be a billion dollar market-cap company in 2015. So it’s best not to predict the future,” he says.

After all, Bakeri has learnt—the hard way—that even the best-laid plans can crumble.

The Unravelling
After he went public with Symphony in 1994, Bakeri regularly met with analysts and experts whenever he visited Mumbai. A common theme began to emerge: Investors would tell him that there was a product concentration risk. If his air-coolers failed to click with consumers, the company would go bankrupt. They urged him to diversify. At the time, his competitors like Crompton Greaves and Usha were multi-product companies. Surely, a company that could make coolers could also make products with adjacencies such as water heaters, washing machines, etc. Bakeri was convinced by their arguments. And by 1995-96, Symphony began manufacturing heaters and washing machines. “We were to blame [for what happened next] as we had made the decision to diversify,” says Bakeri.

Competition in the washing machine and heater arena proved to be a lot tougher than he had expected. As Bakeri had explained to Forbes India in a 2012 article: “Symphony designed a water heater that had a nice sculpted form. There were new safety features. But we had some technical glitches and by the time we ironed them out, established players stole our idea and with it, our market. Similarly, we launched a washing machine. We had developed the world’s first all-plastic washing machine [except for the motor]. We thought it would be a cheap product, so we developed it, but our competitor Videocon saw us coming and it lowered [its] prices. It had a huge volume advantage and better distribution reach. It introduced an entry-level washing machine and we couldn’t compete with it.”

Soon, Symphony began to lose ground even in its traditional air-cooler business, and competitors surged ahead. The net worth of the company slowly eroded to zero. Things were so bad that in 2000, he had no money to pay his employees their Diwali bonus. (At the height of its success, Symphony had enjoyed revenues of Rs 40 crore.)

After filing for bankruptcy, it was like starting a new business from scratch, only worse “because this time, there were legacy issues I had to contend with”.

Becoming a billion dollar company
Through those harrowing years, Bakeri says he never once thought of throwing in the towel. He’d built the company on his own and, within the family, it was his identity. Going back to the real estate business was not an option. Instead, he painstakingly began rebuilding Symphony’s position in the air-cooler market.

New designs were introduced (such as coolers shaped like ice cubes and slim towers), new marketing campaigns launched and new dealers appointed. By the end of 2009, Symphony’s net margins had doubled to 20 percent from 10 percent in 2000.

Bakeri also began tapping the export market. In 2005, Symphony had only one manager developing exports. Now, the company has an entire team devoted to the export market; its products are sold in 60 countries across America, Asia and Africa.

While the focus on new markets has increased sales and allowed the company to grow at a 30 percent compound annual growth rate (CAGR) for the last five years (net sales were Rs 610 crore in 2015), it is in how Symphony runs its business that provides an insight into its asset-light model.

In 1988, when Bakeri launched the company, he had the real estate financing model to understand how to fund it. “I was very clear that I would not give credit to anyone.” Second, he was not interested in manufacturing the product in-house. The coolers were made by outside manufacturers while Symphony set the standard for quality control, pricing and so on. He then sold the product to distributors for cash upfront.

Symphony, therefore, runs on negative working capital and is a zero-debt company. “It has all the makings of an outstanding business: Low capital intensity (driven by a conscious choice as a business model) on account of fixed assets and working capital, healthy operating turns and superior margins is a recipe for exceptional capital efficiency,” says Bharat Shah, executive director, ASK Group. “Prudent and wise management focussed on healthy capital allocation and judicious capital distribution, a product portfolio thriving on consistent innovation and the business enjoying (globally) large size of opportunity make for a remarkable, sustained, long-term value creation.” In the last five years, its stock has risen 38 times. In 2009, it was trading at Rs 40- levels and, as of September 24, 2015, at Rs 1,853.

The company’s fortunes, however, are dependent on the vagaries of the weather. In 2014, the summer season sales in India failed to live up to expectations as it was not hot enough. There was little Symphony could do, but ride it out. For 2015, Bakeri made sure that his dealer and retailer channels were well-stocked even before the onset of summer sales. This way, the pressure to push sales does not stop even if the market is lacklustre.

All of this is an outcome of experience: After more than a decade of struggle, the businessman has emerged stronger because he has not let challenges deter him. Instead, he is taking bolder decisions and planning an ambitious expansion.

China calling
In 2008, Symphony received an unexpected boost when it acquired the Mexico-based International Metal Products Co (IMPCo) from an undisclosed private equity firm. This company had been founded by Adam Goettl from the US who, in 1930, had received the first patent for air-cooling. Over the years, IMPCo changed hands; when Bakeri decided to acquire it, he found that the last owners had sucked the company dry and tacked on a huge amount of debt. Symphony paid off its (undisclosed) debt and started rebuilding IMPCo.

Through the acquisition, Symphony got access to products and technology that allowed it to expand the scope of its business. Industrial air-cooling is one such application. Symphony had expertise in small, plastic, portable coolers for homes. But it is common for factories in other countries like Mexico to use huge metal coolers with metal ducts directing air through vents. These are cheaper than air-conditioners.

With the technology from IMPCo, Symphony, too, has started working on industrial cooling for factories in India. Bakeri sees the potential of this business given that the operating costs of air-coolers are one-tenth that of air-conditioners.

Another advantage is that India is still an untapped market and, according to Bakeri, cooling devices (excluding fans) are in less than four percent of homes. To take advantage of this, Symphony has worked at significantly enhancing its distribution network and reach by increasing the number of distributors three-fold. Today, the company has 850 distributors across all states in the country.

The next leg of growth could come from China, which is the world’s largest air-cooler market, but still remains very fragmented. In August this year, Symphony acquired China’s largest air-cooler company that sells products under the brand Keruilai for Rs 1.55 crore. And though the brand has a strong presence in Southeast Asian markets, he will have his task cut out as the company is making losses. Bakeri, however, sees a significant scope for expansion once the company is integrated into Symphony and believes that clocking a 20 percent CAGR in the years to come shouldn’t be a problem.

His confidence isn’t unfounded. Twenty-seven years after he founded the company, Symphony’s operations are once again on autopilot. But this time around, Bakeri is not taking his eye off the ball.