His natural affability has helped Nandan Nilekani bridge many divides. Perhaps his greatest test lies in his latest role, as the non-executive chairman of Infosys, the firm he co-founded 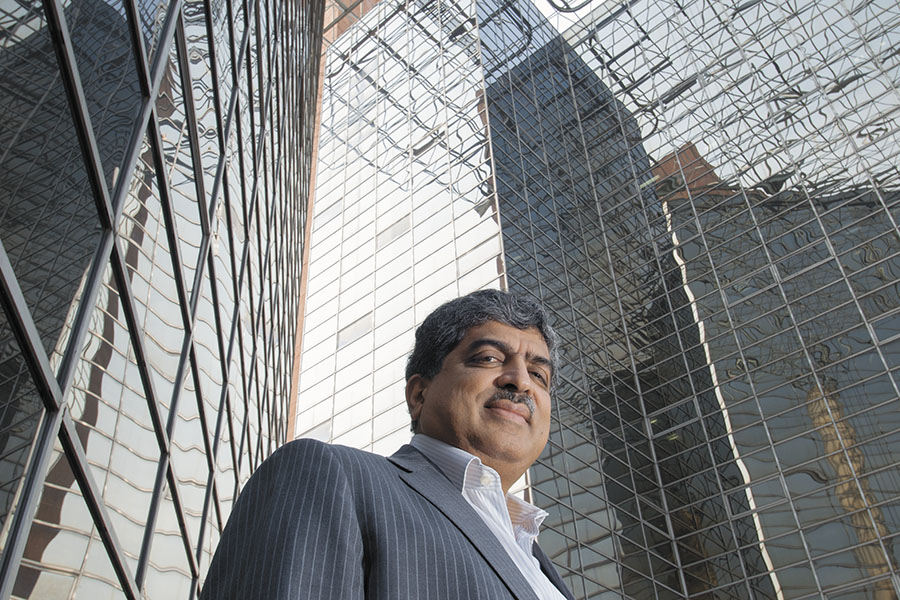 The world may not have known Nilekani had NR Narayana Murthy not identified the spark in him way back in February 1979
Image: Amit Verma

When Naman Pugalia first wrote to Nandan Nilekani in the summer of 2009, he did not expect a response. After all, Pugalia was a nobody, fresh out of Brandeis University, Massachusetts, in the US, hoping to work with the Unique Identification Authority of India (UIDAI), an organisation that Nilekani chaired. People of Nilekani’s stature had no business responding to cold emails seeking jobs, he thought.

Much to Pugalia’s surprise, Nilekani wrote back, albeit regretting his inability to immediately accommodate Pugalia. Six months later, when a position opened, Pugalia joined UIDAI, kickstarting an association with Nilekani that would transcend the project. “When I started working with Nilekani, I realised that the act of responding to my email wasn’t a one-off, but something that is fundamental to him. His rules of engagement are extremely democratic,” Pugalia, founder of FourthLion Technologies, a political campaign planner that counts Nilekani as its first client, says in a phone interview. “He is a leader who will seek you out.”

At 62, Nilekani has made many friends like Pugalia and won more fans with his disarming demeanour and collegial approach at work. Gestures as elementary as responding to an email, for instance. More important, these friends cannot only be found in the swanky chambers at corporate offices or government establishments, as befits the billionaire co-founder of software services exporter Infosys, but also among the foot soldiers.

The ability to crack a joke or two, or make up a quick story to liven up people, has made him even more affable. Som Mittal, former president at Nasscom, recalls an incident when he was at the receiving end of Nilekani’s humour. “At my wife’s [Vidhu Mittal] book launch, Nilekani told a room full of people, ‘I was always wondering how Infosys was losing business to Digital Equipment [where Mittal worked] and that was because Som would invite his customers home and his wife would cook for them’,” says Mittal.

Nilekani, say his peers, is a charmer with a gift of the gab, who can engage people from all walks of life—be it a budding entrepreneur seeking words of wisdom, an executive disillusioned at work, a prospective client who can bring in the money for Infosys or a discerning academic—and influence them more often than not.

Take, for instance, Pulitzer Prize winning journalist Thomas L Friedman, who visited the Infosys campus in Bengaluru in February 2004 to interview Nilekani on outsourcing. While Friedman had walked in with a lot questions, he walked out of the interview with the title of his bestseller, The World is Flat, inspired by a seemingly innocuous observation by Nilekani on globalisation, “The playing field is being levelled.”

“His [Nilekani’s] ability to network and connect with people and clients is extraordinary. He could build consensus,” says V Balakrishnan, former chief financial officer at Infosys. “He is somebody who can align everybody to a particular line and is extraordinary at winning over people.”

The world may not have known Nilekani had NR Narayana Murthy, the force behind Infosys, not identified the spark in him way back in February 1979. Back then, Murthy was known to hire meritorious candidates for Patni Computer Systems irrespective of their field of study or work experience, prompting Nilekani, who had a bachelor’s degree in electrical engineering from IIT Bombay, to try his luck. “I gave him a test in advanced pattern recognition and he came out successful. I asked him in the interview what he was planning to do. He said he was waiting to take GMAT,” recalls Murthy of his first encounter with Nilekani.

Nilekani didn’t write GMAT. In 1981, two years after joining Patni as a software engineer trainee, he set up Infosys with Murthy and five others. He delivered from the word go. In the early days at Infosys, he did a “good job” in leading a team of six engineers in the US to develop software for one of the company’s clients, says Murthy. Next, Nilekani led a team that would develop a “functionally and technologically enhanced apparel package” on an IBM 4341 computer for another early customer of Infosys at Grand Rapids, Michigan. He was also instrumental in winning an outsourcing contract from General Electric, one of Infosys’s biggest clients in the mid-1990s.

Infosys scaled great heights after Nilekani succeeded Murthy as the chief executive in 2002. By the end of his five-year tenure in April 2007, when he quit as CEO to make way for Kris Gopalakrishnan, Infosys’s market cap had jumped 367 percent to ₹115,307 crore.

Under Nilekani, Infosys was also closing in on larger rival Tata Consultancy Services (TCS), which listed on the bourses in 2004. For instance, Infosys’s total income was 84 percent of TCS’s in 2004-05, 80 percent the year after and 87 percent in 2007, while the company trumped TCS on net profits in 2005 and 2007 (earning 4 and 0.7 percent more, respectively). A decade later, without Nilekani, in 2016-17 Infosys’s revenue stood at 56 percent of TCS and profit at 54 percent.

“Nilekani complemented the rest of the promoters with strategic clarity and customer-facing outlook,” says V Ravichandar, chairman and managing director at Feedback Consulting and Nilekani’s friend since 1989. “Because Infosys was reputed to have great internal processes in functional areas such as human resources or finance, Nilekani offered clients help in those areas. This is his way of thinking how could Infosys become more valuable to customers. If you solve a customer’s real problem, they will also give you more of their time and business.”

It wasn’t just Infosys that was keeping Nilekani busy. In 2000, he cut his teeth in public policy and government affairs when he accepted then Karnataka Chief Minister SM Krishna’s invitation to chair the Bangalore Agenda Task Force (BATF), set up to address civic issues, a development that would set the tone for a series of collaborations with both the state government and the Centre. Nilekani’s appetite for such engagements stems from his love for simplifying problems at scale.

While the 2000s saw Nilekani being twice named among Time magazine’s 100 most influential people in the world, in 2006 and 2009, and awarded the Padma Bhushan in 2006, he was also investing enough and more time in running BATF or planning the Jawaharlal Nehru National Urban Renewal Mission and the Goods and Services Tax Network. “Nilekani had limited patience for pilots. He said pilots are fine but we finally need implementation at scale,” recalls Ravichandar of Nilekani’s four-year stint at the helm of BATF. 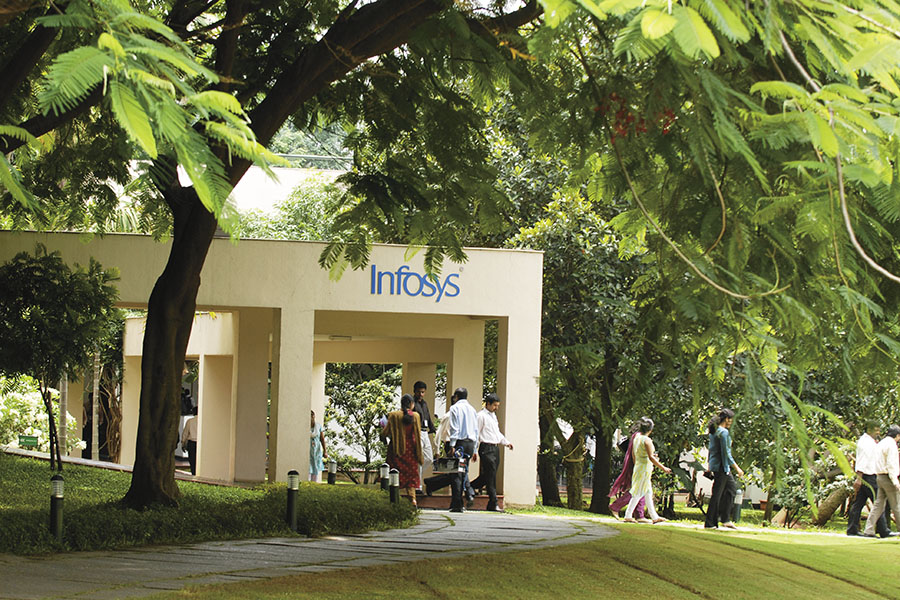 None of those assignments, however, tested Nilekani’s patience as much as UIDAI and its contentious Aadhaar project, which is still muddled in controversies over privacy breaches and data security. Pugalia says Nilekani’s tenure as the chairman of UIDAI, from 2009 to 2014, was a testament to his perseverance and people skills, as he went about quelling negative sentiments around Aadhaar. “There was a time when things weren’t going according to plan and bureaucracy and political manoeuvres were chipping away at the credibility of Aadhaar,” recalls Pugalia. “Nilekani figured out who were the stakeholders and why they were against a particular idea. He reached out to all of them, one by one, irrespective of what their opposition was.”

The dream run of over three decades, however, came to a screeching halt in 2014, when Nilekani faced what can arguably be called the biggest setback of his life: He was routed in the Lok Sabha elections of 2014. Nothing helped. Neither an elaborately planned poll campaign by the team at FourthLion, backed by tomes of research on civic issues and electoral pattern in the Bangalore South constituency, Nilekani’s turf, nor his transformation from an English-spouting, suave corporate leader in suits to a common man who walked around in sandals, exchanging friendly banter with prospective voters in Kannada. Like most other Congress candidates, Nilekani was swept away by the ‘Modi wave’. On May 16, 2014, even before the counting was over, Nilekani conceded defeat to BJP veteran Ananth Kumar. Humbled at the hustings, Nilekani gradually withdrew himself from politics. He hasn’t spoken about rejoining politics since.

Balakrishnan, who faced a similar drubbing at the same elections while contesting on an Aam Aadmi Party ticket, says politics is not Nilekani’s “cup of tea”. “Politics is a different ball game where you have to play on others’ weaknesses more than to your strengths, which Nilekani is not comfortable doing,” says Balakrishnan.

Just like a plumber he likens himself to in jest, Nilekani is back to plugging leaks

Nilekani isn’t the kind who sulks for long. On a constant lookout for large-scale problems, he has turned into a prolific investor and mentor for startups. He has backed more than 10 startups, including publishing startup Juggernaut, media company The Print, ecommerce startup 10i Commerce Services, and logistics venture Fortigo. Earlier this year, Nilekani launched a $100-million venture capital fund called Fundamentum, where he is involved in everything from raising funds and hiring to designing the firm’s logo. “Nilekani believes the problem of India is not to start up, but to scale up. At Fundamentum, we will back companies which are not meteors but built to scale,” says Sanjeev Aggarwal, co-founder at Fundamentum.

At present, Nilekani is busy with the startup he had built from scratch and scaled, Infosys. Just like a plumber he likens himself to in jest among friends and family, Nilekani is back to what he does best: Plugging leaks.

On August 25, he staged a comeback as the non-executive chairman after a hiatus of about eight years, this time to guide Infosys out of a turbulence triggered by the surprise exit of chief executive Vishal Sikka and a protracted sabre-rattling between Murthy and the Infosys board over corporate governance. Nilekani is expected to reconstitute the board and lead the hunt for Infosys’s next chief executive.

It’s a daunting task to make Infosys the bellwether it had once been, but Nilekani is up for the challenge. Until the house is in order, everything else, it seems, will have to wait.

Tweets by @forbesindia
8 Forbes India must reads you should not miss
Boosting your creativity with negative emotions: The case of self-conscious emotions