Yusuff Ali: A mentor to his sons-in-law 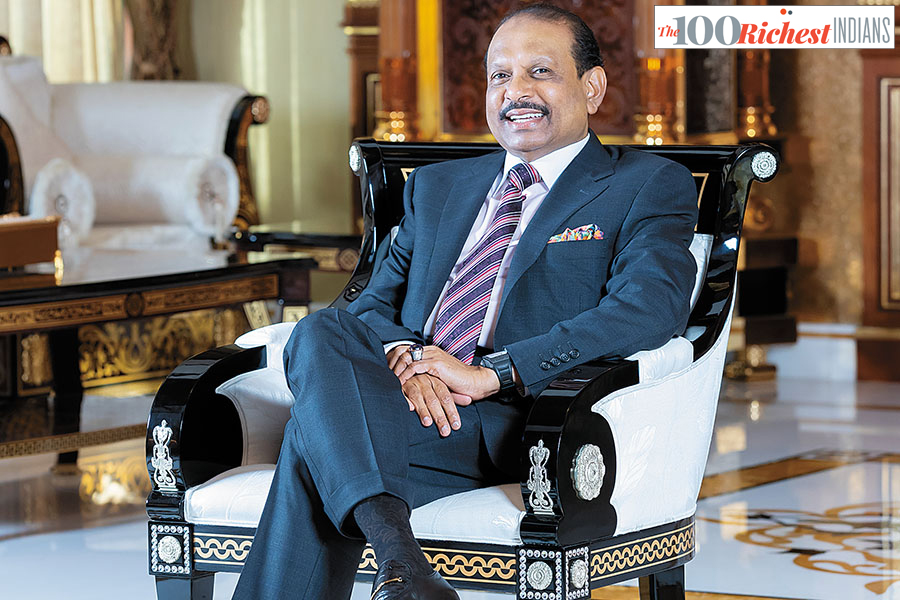 Yusuff Ali has no plans to retire, but hopes his sons-in-law make inroads and also improve their ranking on the Rich List
Image: Shakkir Mohhamed/LuLu Group

For quite some time now, Yusuff Ali Musaliam Veettil Abdul Kader, or Yusuff Ali MA as he is popularly known, had made it a habit of doing things all by himself.

After all, that’s how he went from being a small-time grocer, who migrated to the Middle East with barely any money at the age of 16, to eventually emerge as one of the world’s richest men and perhaps the most influential Indian in the region. With a personal wealth of $4.75 billion and some 48,000 employees under him, Ali runs the popular LuLu Hypermarkets across the Middle East and India, making him the 26th richest man in India, according to the 2018 Forbes India Rich List.

The LuLu Hypermarkets see 1.35 million shoppers a day and operate about 154 shopping centres across 23 countries. The group’s mall in Kerala’s Kochi is counted among one of the largest in India.

But, at 62, Ali knows he isn’t getting any younger. That’s perhaps why, over the past few years, he has turned to his sons-in-law to expand the group into newer areas. They were tasked with identifying their areas of interest and setting up businesses, with zero interference from their father-in-law.

“I have always made it clear to my sons-in-law,” Ali tells Forbes India over a call. “They are free to do what they want to. I will be a guide, mentor and friend to them. But they were always asked to find their areas of interest and build the business. I have nothing to do with that.”

The eldest son-in-law, Shamsheer Vayalil, 41, runs VPS Healthcare, which operates 20 hospitals and over 125 medical centres, spread across the Middle East, Europe and India. Vayalil, who is on the 98th spot on the Rich List, is a radiologist by profession and is married to Ali’s eldest daughter Shabeena.

His second son-in-law, Adeeb Ahmed, 37 (who is married to Shafeena), is the head of the $5.4 billion Lulu Exchange, the financial services arm, Tablez, a brand retailing company, and Twenty14 Holdings, a company that has been expanding the group’s hospitality division. In 2015, Twenty14 Holdings acquired and leased Great Scotland Yard, a hotel and the former headquarters of the Scotland Yard in London.

A third son-in-law, Sharoon Shamsuddin, is setting up the information technology and infrastructure business. “He is just starting out,” Ali says. “I am happy that the other two have succeeded. I have only given them the advice that my grandfather had given me. That is, when you become wealthy and rich, you should never think that others are smaller than you. Beyond that, I don’t interfere in their day-to-day operations.”

But it is unlikely that they don’t look to their father-in-law for guidance. “He is somebody who has always challenged the norms,” Adeeb says. “When we look at him, we feel we don’t do enough and it inspires us to push ourselves.”

There certainly is merit in that. After all, Ali wasn’t even of legal age to vote when he moved to Abu Dhabi in 1973, in its pre-oil boom days.

The original superstar
Born in Nattika, a nondescript village in Kerala, Ali took a 14-day voyage on the vessel, Dumra, to Abu Dhabi to help his uncle, MK Abdullah in his small grocery business there. By 1983, he travelled to Singapore, Hong Kong, and Australia where he stumbled upon the concept of supermarkets.

“We went from a departmental store to hypermarkets and eventually shopping malls with hypermarkets,” says Ali. Alongside, he also started importing and selling their own tinned food, since demand had peaked with the influx of workers on the back of the oil boom.

But Ali’s big break came through in 1990 amid the Gulf War. As many packed their bags to leave the emirate, Ali decided to invest and open a “big hypermarket” in Abu Dhabi, a move that caught the attention of Sheikh Zayed, the ruler there. “He asked me, how do you have the energy when everybody is abandoning the country,” Ali says. “I told him we are here to stay and that I learnt my business in Abu Dhabi and was not willing to run away from the problem.” An impressed Zayed called his son, the current ruler, and told him to take care of Ali. “That relationship continues to this date,” Ali says. “They treat me like family. Even when PM Narendra Modi was visiting, I was seated with the royal family. They treat me like their own.”

Today, Ali’s clout has also grown across the Middle East and in India. That was evident when Abu Dhabi-based Etihad Airlines picked up a stake in Jet Airways, a move that was reportedly brokered by Ali. Most recently, he was rumoured to have worked behind the scenes for the UAE’s reported offer of ₹700 crore aid package for flood-hit Kerala.

But that didn’t stop Ali from doling out over ₹12 crore towards the Kerala relief operations. He was soon joined by Shamsheer, his eldest son-in-law who pledged ₹50 crore for it.

Generation next
Shamsheer founded VPS Healthcare, a network of hospitals, clinics, and pharmacies across the Middle East and India. Born into a business family in Kerala, he had gone to the region after his medical studies to work as a radiologist. But, with backing from his father-in-law, he started with one hospital in Abu Dhabi in 2007. “He has promised me and my wife a lifetime of free hospital care and medicines,” Ali says. “So I don’t even ask him for royalty.”

VPS Healthcare is now developing new projects in Qatar and Saudi Arabia. With more than 650 physicians and 7,500 employees, it serves some 2 million patients a year. This year, Shamsheer has joined the Giving Pledge, promising to give away half of his wealth towards charity.

Meanwhile, second son-in-law Adeeb has taken to building his own empire that comprises hospitality, financial services and branded retail.

Adeeb, who studied in Kerala till his class 12, went on to study business administration from Les Roches, Switzerland, and did his master’s in International Management from Royal Holloway, London. After working in some of the top hotels, including Marriott, where he was the director of sales, Adeeb moved to Abu Dhabi in 2006 to kickstart Lulu Exchange. Today, Lulu Exchange has revenues of $5.4 billion, over 2,000 employees and operates in nine countries.

“I was asked to pursue something of my interest,” Adeeb tells Forbes India. “My father-in-law didn’t want me to come and disturb the well-oiled machine that Lulu is.”

By 2012, Adeeb and wife Shafeena also founded Tablez, a brand retailing arm that has the master franchise rights for Toys“R”Us, casual brands such as Springfield and lingerie brand Women’secret, among others. Tablez is looking to increase its store count to 150 by 2019 from 37 presently.

Adeeb is also in charge of the group’s hospitality division, and has already ploughed in $650 million into hotels across Europe and intends to use another $350 million in developing properties across India and Europe. “We don’t have a day-to-day monitoring,” says Adeeb. “Instead, he jokes that, if there are losses I have to bear, and in case of profits, I must share a royalty with him.”

Together we run
Ali is clear about the role his next generation plays in taking on the flagship business. “I am not thinking of retiring,” he says. “I have a well-established team to run LuLu, including my brother. The company also has its CEO and CFO.”

Is there a healthy competition between the children? “Not really,” says Adeeb. “We don’t discuss business over dinner; we run our businesses independently.”

Ali, meanwhile, has made it clear that he doesn’t want to climb up the Rich List any further. “Inshallah, by next year, Shamsheer would have moved up to 70 or 80, and I would like to see Adeeb there,” he says.

Does he have any advice for the children, especially for Sharoon who is starting out? “I would say do not cheat in business and never allow your staff to do so. We must also give charity to the poor and take care of the staff. My staff has been my success.” Ali’s workforce is primarily from Kerala, where almost every household has somebody working at LuLu. That also means that he has an incredible clout and fan following in Kerala.

Will he then join politics? “No,” Ali says. “I will not succeed in politics.” And certainly, who better than Ali to understand a gamble?

Tweets by @forbesindia
Pidilite's Madhukar Parekh: Glued to growth
Biocon: A biosimilar shot in the arm