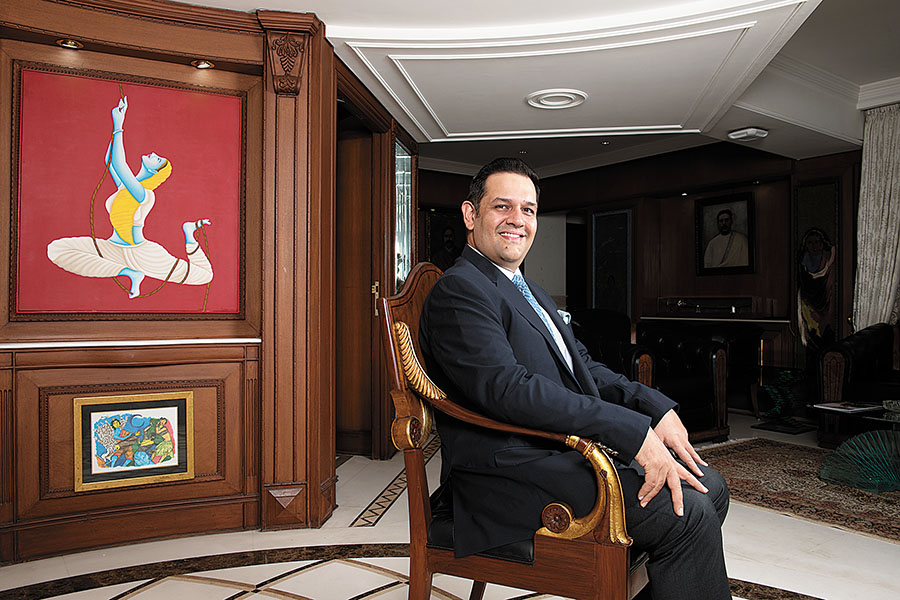 Aditya Burman, the youngest member on the board of one of India’s oldest FMCG companies, has his task cut out in his new role as non-executive additional director of Dabur. The 39-year-old not only has to take forward the legacy of the 135-year-old company but also strike a healthy balance between tradition and modernity. “For us, it’s about preservation,” he says in his first interview after joining the board in July. The sixth-generation scion of the Dabur family, who learnt the ropes of business first as an intern at Dabur Pharma in 2003, is credited with turning around Oncquest Laboratories, the clinical pathology and molecular diagnostics arm of Dabur, and taking its top line to over ₹100 crore. “We bring the value, the market brings the valuation,” Burman tells Forbes India. Edited excerpts from an exclusive interview:

On being the youngest member on the board
I feel honoured. It's a challenge and very exciting. A lot of my family's sweat, blood and tears have gone into this company for over a century. And there's a lot of respect to be paid for that. There is also a lot of respect to be paid for the efforts of all our colleagues. We live in exciting times now. A lot of change is happening and people are listening to the youth. I won’t call myself young anymore. I have a fair bit of white hair (laughs). But hopefully I can bring a little bit of perspective into some of the (youth) conversations.

On the pressure, or baggage, of legacy
There's definitely pressure to live up to expectations. In India, there's a lot of looking up to that people do. But I don’t think it’s a baggage. It's a privilege. We want to ensure that we continue treading on the path we set in the past. We'd like to set an example for others. A lot of responsibility comes with that. You don't want to be in a hurry or step on any values that you've held for so long. For us, it’s about preservation. We don't like breaking things. We like breaking perceptions. We like to break the norm when it comes to governance. But we treasure preservation of culture, people's livelihoods and values.

On bringing a mix of modernity and tradition
The crying need of this time is preserving our planet. We have to do whatever we can to ensure that we are doing things responsibly. The modernity part comes with the methods that we're using. Modernity for the sake of it doesn’t make sense. It has to be used alongside traditional understanding of things. Take, for instance, the research and development that we have in ayurveda. It’s something that we hold dear to our hearts. A lot of companies weren't taking this seriously. But people have now started understanding the value of the science behind ayurveda, and what and how we are doing it.

On Dabur getting a millennial makeover
We're doing this in a big way. Our health and beauty stores are millennial-focussed with a lot of products and offerings. Millennials want more variety, and the kind of SKUs (stock keeping units) we are coming up with is a departure from traditional formats. For example, we've always been the largest in sourcing high-quality honey. But the question is, what can we do with honey apart from the way we have been using it? Can we use it as a substitute for artificial sweeteners or sugar on a regular basis? Can we use it in different formats like single-use sachets? So we are modernising a lot of our formats.

Honitus hot sip is a classic example of an ayurvedic format of cough syrup in a sachet form. All one needs to do is open the sachet, put in hot water or tea and have it. What we are now looking at is the possibility of introducing the same in a tea-bag format. We have done a similar thing with Pudin Hara fizz and Amla kids, which is available only online. We have to be present where the millennials are. It's no good having something on the side of the road if the guys are buying online.

On the online and offline mix
My dad shops online, but that does not make him a millennial. And just because millennials shop online, it does not mean they won’t buy from a kirana store. Ecommerce is an unbelievable platform and technology, but it is not going to kill offline. It won’t happen. It hasn't happened anywhere in the world and I don’t see any reason for it to happen here.

On cash burn
One has to compete with people who are burning cash… that's one problem. I believe one shouldn’t play other people's game. We respect having a healthy bottom line. Rather than spending (burning cash), investing is something that we've done from the beginning. But we don't hesitate in taking a loss where it's needed. We need to get market share. But that doesn't mean selling things below the price you make them at. That's crazy. You do things that are reasonable, achievable and ambitious. But they have to be within the realm of reality.

On the vision for Dabur over the next decade
First of all, Dabur has to be as respected as it is today… that’s the main thing. Respected by investors, consumers and employees. In terms of business, I see us in more geographies than we are now. Our global relevance is something that I'd like to see increase over the next 10 years though we've done a fabulous job for the last few decades.

Tweets by @forbesindia
India's Richest 2019: The Burman's lay ground for Dabur 3.0
Inside Ikea-backed design lab SPACE10, ahead of India debut