Modi will emerge in a strong position: Mark Mobius 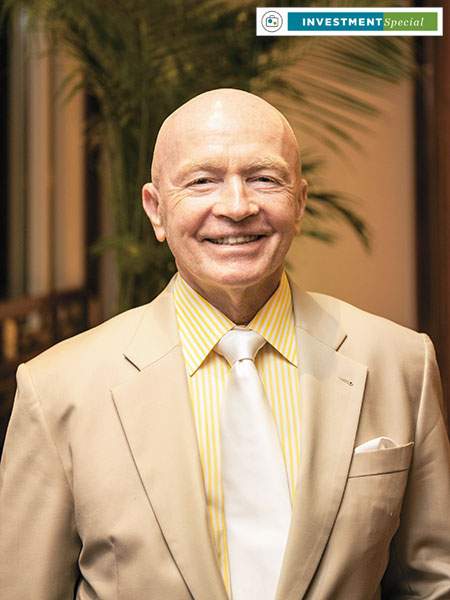 Emerging markets expert Mark Mobius says investors need to be wary about how the US economy fares
Image: Mexy Xavier

Mark Mobius, founder of emerging markets asset manager Mobius Capital Partners, is confident about a second term for the Narendra Modi government. Speaking to Forbes India from Dubai, Mobius, who worked with Franklin Templeton Investments for 30 years, says the fact that India’s main indices have been inching up since their September 2018 correction indicates that sentiment and prices are improving. The current global economic slowdown, he says, may not impact China too much, but investors need to be wary about how the US economy fares in the coming quarters. Edited excerpts:

Q How deep is the global slowdown, particularly in the US and China?
There is some slowdown in China, but its government will not allow things to go out of hand. It is interesting that they have been able to convince the MSCI to increase the weightage for Asian markets… that means more money will flow into China. [This month, index provider MSCI said it would boost the proportion of Chinese A shares by four-fold in its global benchmark indices.] I don’t think the (slowdown) situation will get worse in China, but achieving high growth rates will be difficult.

The US economy could see a sideways movement this year, but we could see more of a slowdown next year. Last year, we saw a big surge in the GDP (growing at 2.9 percent in 2018 compared to 2.3 percent in 2017)… but with elections coming up in the US later this year, I don’t think Donald Trump can allow the economy to get too weak.

Q What could the rate action be from the US Fed this year?
I think the Fed will wait to see what will happen to the economy. They will not allow too much volatility in the rates.

Q Is the worst over in terms of the trade wars?
The US will continue to put pressure on China… it will eventually reach some agreement. But the important point is that some EM (emerging markets) countries such as Vietnam, Bangladesh and Turkey will benefit from this. India will also benefit to some extent, as would Mexico.

Q Globally, is there any factor that investors need to be concerned about in the coming months?
Investors need to watch out for developments in the US. If there is a big upset in their elections, it will be a big game changer, for that would mean a wholly different set of policies being introduced.

We have already seen an incredible correction; their bull run lasted too long and saw a big correction post September. But there has been an increasingly rapid recovery since then suggesting that fears of a bear market have faded. But if there is a situation where stock prices fall, it would be a real concern.

Q How do you see the elections panning out in India? Do you see the BJP government coming back to power, in the aftermath of the Pulwama terror attacks?
This Pakistan event [Pulwama terror attack] probably helps the incumbent government because what people want is surety that the nation will be protected. Narendra Modi has been giving speeches that he is strong and will make sure that the country is not being taken advantage of.

Q But investors are not willing to take big bets at the moment…
You can’t expect Modi to have the incredible results that he achieved in the first term where he dominated the legislature. But I believe he will head the majority and emerge in a strong position, with the help of alliances.

Q How much would the elections impact Indian stocks this year?
If the result is a big surprise and we see a big weakening of Modi’s power, it won’t be good; it will lead to a deeper correction for equities. But if we are to consider that the markets will signal what happens in the future, the general trend of optimism is very much intact.

Assuming that economically things start to improve [India’s GDP at 6.6 percent is at a five-quarter low], India will see the mid-caps and small-caps coming into play. When buyers find no more bargains in the large caps, they start moving downwards into the mid- and small-caps. The debt markets will start to look up, after a volatile last year, considering that PE levels are also starting to creep up.

Q When a new government comes to power, what structural reforms does India need?
India needs to figure out how to make investing easier in the financial markets. The government has to also move quickly on privatisation of state-owned enterprises, compared to the past. China has privatised so many state-owned enterprises, while keeping control low; it has managed to get a higher weightage in the MSCI or other indices. When the weightage improves, index ETF funds are forced to increase their allocations. This is something that India will need to explore.

Q When do you expect corporate earnings growth to pick up for India?
If you look at the PE ratio of the index, it is creeping up. [PE for the Sensex is up to 26.7 in March 2019 from 23.4 in April last year.] This is the first sign that earnings will start to pick up.

Q The growth for Mobius Capital Partners… how is it faring?
We have already got $160 million as investment through two funds. We are just at the beginning of the curve, but obviously happy with the progress. It would be nice to be able to grow to a $1 billion size over the next two to three years. Though it took some time, we have just entered India.

Tweets by @forbes_india
Winning Together: The Secrets of Negotiations
On the crypto fence