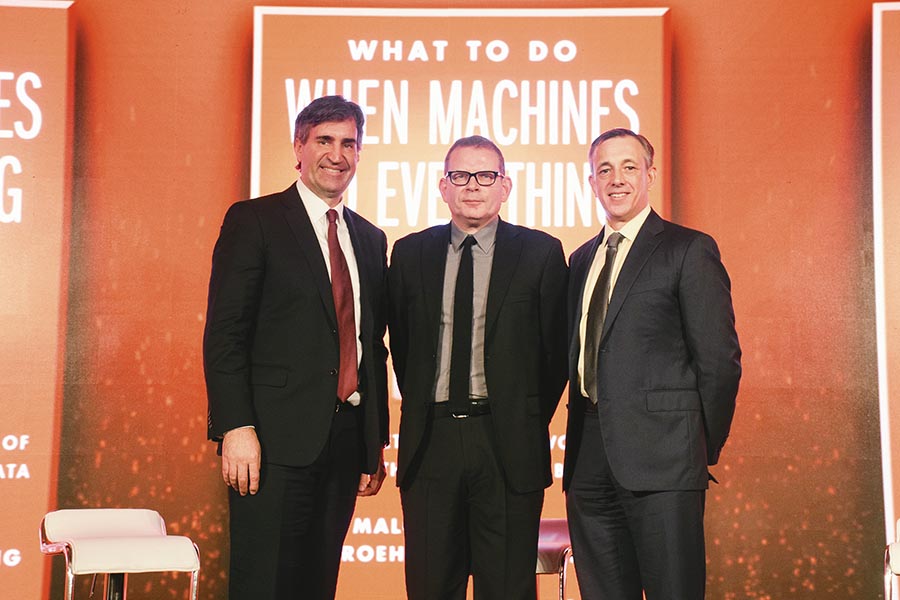 From left: Malcolm Frank, Ben Pring and Paul Roehrig, authors of Code Halos and How To Get Ahead In A World Of AI, Algorithms, Bots And Big Data

In early 2014, three leaders at Cognizant Technology Solutions published Code Halos, in which they captured the idea that all of us, and all the objects around us, have data associated with us—they called it the ‘halo’—and making sense of that data opened up many interesting possibilities. Malcolm Frank, Paul Roehrig and Ben Pring, the authors of Code Halos, have written a sequel of sorts in which they argue that Artificial Intelligence (AI) will be the means to understanding that halo, and for acting upon it. In their book, What To Do When Machines Do Everything: How To Get Ahead In A World Of AI, Algorithms, Bots And Big Data, they make the case for taking a pragmatist’s view on the rise of AI, instead of going to extremes.

It is very clear that even though people talked about AI for decades, it has finally become a reality, Frank tells Forbes India in a recent interview. The hype is about people imagining a dystopian future, say 20 or 30 years from now, in which machines rule humanity. People get concerned about what may happen with this singularity, which, loosely put, is when an AI will pass the test for being self-aware and trigger an explosive growth in tech that humans may not be able to control.

People are getting caught up with “what’s going to happen when the machines can do everything, machines that don’t have morality and ethics and get caught up with science-fiction type issues?” he says. “The irony is, all of us are using Artificial Intelligence today in our daily lives—every time you go on your Facebook page or ask Siri a question.”

That said, advances are taking place rapidly. Look at games that require strong application of the mind: When AlphaGo beat the champion Lee Sedol in Go last year, “that was a huge, huge leap”. One that was even more telling, Frank says, was the Libratus AI platform, on which Carnegie Mellon University and Pittsburgh Supercomputing collaborated. Libratus beat a poker champion this January. “It’s a game of bluffing,” Frank points out, and therefore such advances are “milestones that show how fast AI is evolving and it has profound implications for businesses”.

The leading digital companies today—Facebook, Amazon or Google—have AI at the core of their business. But when we start to look at the implications in more traditional industries—banking, insurance, health care, retail—AI is nothing short of a “new machine, the machine that could drive the fourth industrial revolution,” he says.

The authors of the book have identified the patterns they’ve lived through, for instance of how opportunities crystallise and affect the IT services business. For example, when business management solutions were built on top of database management software, the market for such solutions and the software took off—which is why even today the IT services companies have massive teams that work on such applications. We are “very close” to a similar rise of a market based on AI-based solutions for businesses, Frank says.

While much of the current debate on how AI will affect humans has centred around automation and job loss—“automation is eating our clients’ businesses and it is also eating the IT services companies’ businesses”—there are four other things to remember, Frank says. First, AI bots will enhance human ability in every field—doctors to lawyers to professional sportspersons. Today they often rely on informed guesses, but in the days to come the ability to crunch massive amounts of data on the internet will give them a data-driven set of options, and even grade those options according to the ones most appropriate to proceed with.

Next, smarter products, which will be the result of instrumenting everything (building sensors that can talk to a computer into everything around us) from asphalt roads and bridges to airplanes and heart-lung machines, will help us take far more data-based decisions on what needs urgent attention and what can wait. 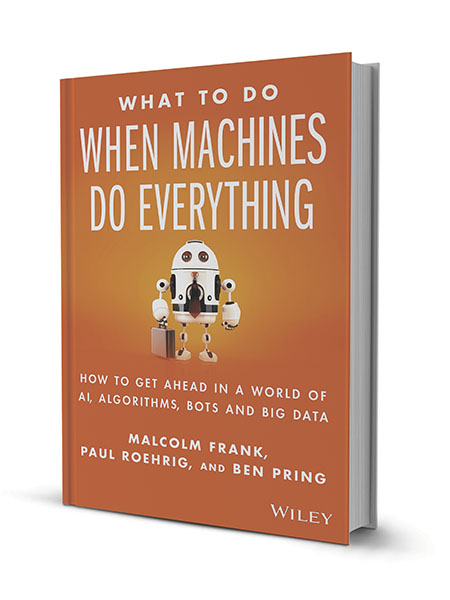 Frank and his co-authors call the third piece “a new abundance”, and financial services is one of the best examples, armed with robo-advisory services. Imagine investment advice from a broker for Rs 1,000 and an AI alternative that is much more statistically based on rich data from the history of investing itself, for Rs 10 or Rs 100. Betterment, exactly such a company in the US, is raking in customers, and What To Do When Machines Do Everything starts off with Betterment’s founder Jon Stein’s success. Millions of people are tapping Stein’s company to professionally manage their money, and the AI-based startup increased assets under management from $1.1 billion at the beginning of 2015 to $5 billion by mid-2016, the book says.

The fourth piece is about invention and innovation, powered by AI’s computing abilities. “So much is going to be invented,” says Frank. There are some areas where the use of AI is at a nascent stage, but which will go mainstream well within our lifetimes: Areas like biotechnology will become much bigger than IT in 10 years, or the virtual reality and augmented reality market will be larger than the TV market.

This doesn’t mean AI won’t cause massive disruption, and not in the way entrepreneurs abuse the word, but simply that it will hurt people’s lives, and force them to adapt or perish.

In the next 10 years, the unemployment rate will probably be the same in most economies, “but underneath that, there will be huge churn”, Frank says. About 12 percent of jobs will be eliminated, and a lot of those jobs will be in middle management where people are basically pushing paper to one another. On the other hand, three quarters of all the kinds of jobs are going to be enhanced by the bots.

Within the IT companies, software testing, systems maintenance, and BPO tasks are among the areas where AI and machine learning is already eliminating human effort. Therefore, areas such as design thinking have become central to training.

The technologies of the new era have to be taught. So, there was a time when a young recruit would join the IT business by learning a programming language such as C++; whereas today, the recruit will also have to have a solid understanding of the Internet of Things and machine learning, for instance.

The big question facing the IT companies (and their customers) is, how much of their work will have been automated, say, five years from now, and unfortunately, “that’s like asking who is going to win the Kentucky Derby”, says Frank.

But that doesn’t mean the companies aren’t applying complex math and modelling to come up with possible scenarios on job redundancies. The results are as varying as 5 percent to 50 percent of jobs, and everything in between. The tricky part is that if AI is going to become as powerful as experts believe, then how much of the current way of life will it take away, and how much of these new models will it create?

Tweets by @forbes_india
We don't do things from an opportunistic point of view: Montblanc CEO Nicolas Baretzki
AB de Villiers bats for child literacy through Montblanc's partnership with Unicef