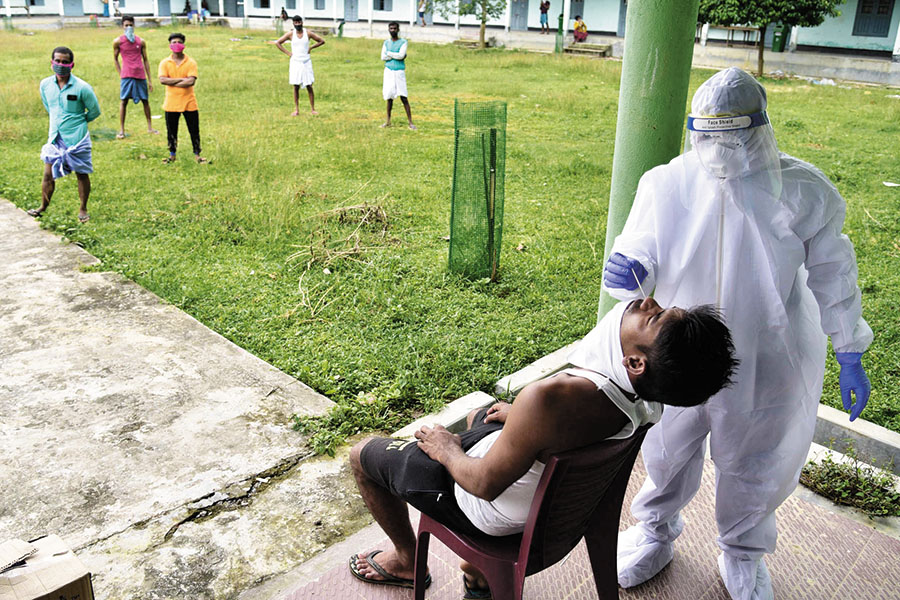 Even as national testing rates have increased, some cities have hit the pause button on testing
Image: Anuwar Ali Hazarika / Barcroft Media Via Getty Images

A surge in infections in late June and early July to 8,79,000 cases took India to the number three spot in global Covid-19 cases past Russia and behind Brazil. The US has the most number of cases.

It also established two trends that increasingly point to why the virus still has a long way to go in India. First, there has been no seven-day period since March when the rolling average of cases has declined. Cases now average at 23,000-25,000 a day with a positivity rate of 12 percent. As testing is ramped up further (260,000 a day at present) and testing protocols loosened, there is every chance that these numbers will increase further.

Second, in the 45 days since migrant workers started returning to their home states, cases have begun to trickle in from smaller towns and cities. States such as Odisha, Bihar, Haryana and West Bengal that had been successful in containing the spread have had their numbers tick upwards even as new hotspots—Bengaluru, Goa and Kerala—emerge. Initial problem states—Maharashtra, Tamil Nadu and Gujarat—have seen no let-up in infection rates. Even as national testing rates have increased, cities like Mumbai have hit the pause button on testing with tests averaging between 4,000 and 4,500 a day, and a positivity rate of 35 percent since late May.

Even though tests in Mumbai no longer require a prescription, it remains to be seen whether the number of tests conducted has increased meaningfully. Even with increased tests, Mumbai is still some way away from peaking. Delhi has increased testing to 20,000 a day, but these include the less sensitive rapid antigen tests that result in false negatives. So while daily positives hover between 2,500 and 3,500 a day, the absence of data on the number of false negatives makes it difficult for now to call a peak in Delhi. Till the first 10 days of July, both cities have been unable to bend the curve.

“We are past the early stage and now in the middle stage of the spread. This community transmission stage will always show rapidly rising numbers,” says Priya Balasubramaniam, senior public health scientist at the Public Health Foundation of India. She points to a low death rate as a success factor in how authorities have managed the pandemic. This is in contrast with Europe that had a high death and infection per million rate initially, but has since managed to slow the spread considerably. Lower infections in Europe have allowed governments to open businesses. Restaurants, cafes and tourist monuments are open for summer tourists in contrast to the US where cases approaching 60,000 a day have promoted piecemeal lockdowns. 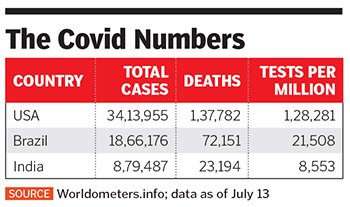 While rising cases, a low death rate and high recovery rate have prompted local governments in India to open business activity, the next 12 weeks, the time it would take for infections taken back by migrant workers to spread, are crucial to understanding the virus trajectory in India.

So far, India is the only large country other than Brazil that has not seen a decline in the rolling seven-day average of cases since the pandemic began in early March. Already, states and local administrations have hastily announced lockdowns in certain districts with potentially devastating consequences on business activities. For instance, a week-long shutdown in Aurangabad announced on July 8 could mean a shortage of auto components for automakers.

An increase in testing and concomitant rise in cases points to infections spreading more evenly across India and pushing the curve even steeper before it flattens. Researchers have pointed to a peak in cases arriving by September or October, but noted public health expert professor Ashish Jha, director of the Harvard Global Health Institute, in interviews has signalled a year-long pandemic in India with a near constant wave of infections.