As part of a global initiative, Hindustan Unilever has embarked on a wide-ranging programme to source all its agricultural raw materials sustainably by 2020. The Indian farmer is a key beneficiary 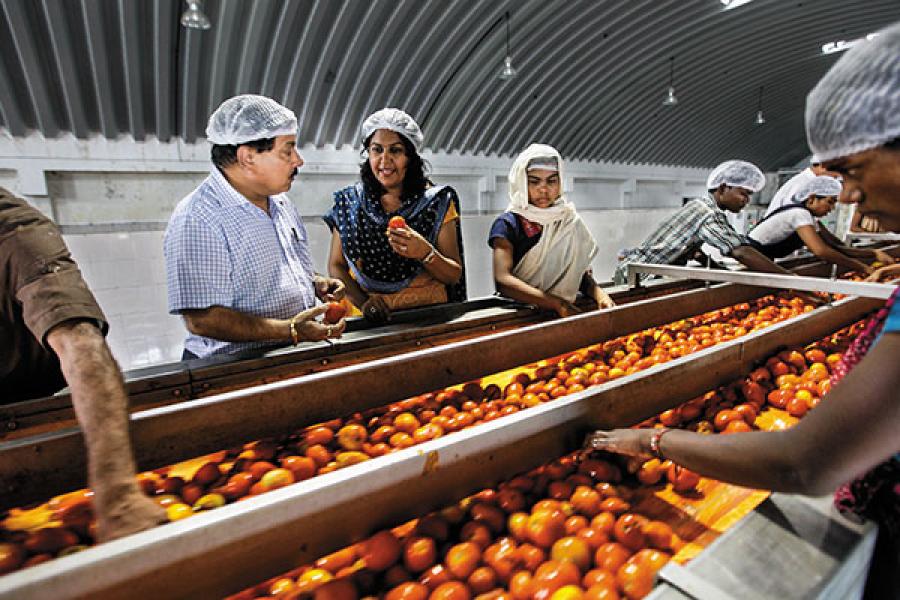 HUL has trained farmers in best practices for growing high-yielding tomato varieties, provided them with the right agricultural inputs and promised to buy the produce

Award: Conscious capitalist for the Year
Hindustan Unilever
Why it won this award: For weaving business imperatives with social projects that end up serving the disadvantaged without sacrificing shareholder interest.


“My yield has tripled and my income has risen even more,” says a visibly excited Nandu Laxman Dhatrak. A farmer in Umrale near Nashik, Maharashtra, Dhatrak has been growing tomatoes on his two-acre plot for as long as he can remember.

But his enthusiasm is relatively new-found. Till some time ago, with a yield of a mere five to six tonnes per acre, business was hardly remunerative. Transport was a challenge as were the logistics of getting fresh produce to the market. Once there, he was at the mercy of middlemen who decided what to accept and, more importantly, what they would pay. He grimly recalls that a few years ago, prices at the Nashik wholesale market crashed to Re 1 per kilogram, sending incomes plummeting.

All that changed in May 2012 when Hindustan Unilever (HUL), the Indian subsidiary of the $65 billion consumer goods giant Unilever, decided to work with the farmers to source tomato paste for its range of Kissan tomato ketchup. Unilever, which buys 3 percent of tomatoes produced globally, had so far relied on imports; it was a lost opportunity for Indian farmers to earn more and also to get educated in modern farming techniques.

Last year, the company launched a wide-ranging programme to improve the quality of tomatoes. HUL now sources 60 percent of its tomato requirements from India, most of it from an area of 800 hectares in and around Nashik, Ahmednagar and Pune in Maharashtra. The consequences: Yields are up, agricultural practices have improved and farmers are no longer at the mercy of middlemen.

The initiative is a key part of HUL’s plan to make its business practices more relevant for the communities they operate in. “Businesses in the 21st century cannot be divorced from their social responsibility,” Nitin Paranjpe, former HUL CEO and now president of Unilever’s home care division, had said in a September 2012 interview with Forbes India. Paranjpe was only echoing the vision as defined by his boss, Unilever CEO Paul Polman. Launched in 2010, the Unilever Sustainable Living Plan is arguably the most ambitious plan yet for any global corporation. Under the programme, Unilever aims to double the size of its business by 2020 while halving its environmental footprint. It also targets improving the health and hygiene of a billion people around the globe and source 100 percent of its raw materials in a sustainable manner.

In doing so, Polman is taking on the conventional notion that businesses have a fiduciary responsibility to maximise profits for their shareholders. In an April 2012 interview with The Guardian, the British daily, he tried to disabuse the notion and said it was, “too narrow a model of Milton Friedman’s old thinking. The world has moved on and these people need to broaden their education with the reality of today’s world”. However, he is apprehensive that the markets may not take too kindly to this approach and has reached out to longer term investors like pension funds, rather than hedge funds that owned 15 percent of the company’s stock (that number is now down to 5 percent), to invest in the stock.

Back home in India, HUL has wholeheartedly jumped onto the sustainability bandwagon. The company has done this while remaining a darling of the stock market. As sales have zoomed 18.8 percent to Rs 28,172 crore in 2013, profits have kept pace and moved from Rs 2,800 crore to Rs 3,839 crore. Apart from the local sourcing of tomatoes, it also reaches out to 119 million people through its Lifebuoy handwash programme and procures tea from Rainforest Alliance Certified estates in the country.

HUL’s latest push mirrors that of other multinationals in India who had earlier found it hard to source good quality agricultural produce. McDonald’s, for instance, started by importing its stock for French fries. Due to stringent foreign exchange controls, the company changed tack and began to work with farmers in Mehsana, Gujarat. After almost a decade, it has reached a stage where it is able to obtain potatoes locally. Pepsico’s Frito Lay also, eventually, had to work with farmers in Punjab. With both these companies too, the programmes have widened and evolved into sustainable sourcing initiatives.

Earlier this month, Forbes India visited HUL’s tomato sourcing operations in Umrale near Nashik. There, the company has trained farmers in the best practices for growing high-yielding varieties, provided them with the right agricultural inputs (fertiliser and pesticides) and also promised to buy their produce. HUL is also supporting a bright young entrepreneur couple who took a chance and set up a 5,000-metric tonne processing plant.

Farmers First
In sourcing tomatoes from India, HUL had to contend with two problems. First, the type available was not what the company wanted. They had to be hard and firm and bright red (ideally, they should have a colour value of 2.4 but the company has managed to reach 1.8-1.9. Firmness and colour are the most important factors for determining the quality of tomatoes). Thus far, farmers had been growing Indian varieties: Pusa Ruby, Pusa Early Dwarf and Solan Gola. These had a yield of five to six tonnes per hectare and were very juicy. As a result, they couldn’t be transported over long distances. Second, the company needed a steady supply to keep a plant operational for at least three months in a year. 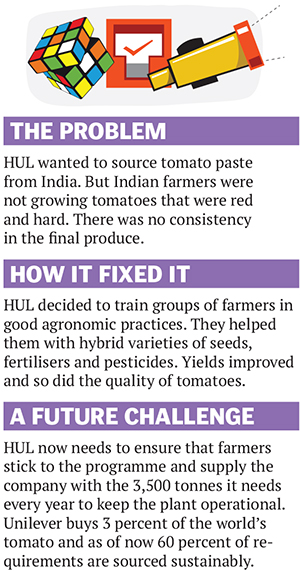 Ramesh Krishnamurthy, procurement operations director for South Asia at Unilever, knew he would have to start by developing the skill sets of farmers. To begin with, farmers needed to move away from the desi to the hybrid variety seeds supplied by companies like Sugenta and United Genetics. With them, the average yield goes up to 40 tonnes per acre.

Once the right seedlings were in place, the company worked with groups of farmers to improve their agricultural knowledge. Soil was tested and farmers were informed about the right dosage of fertiliser. At the field of Tanaji Valu Dhatrak, another tomato grower, for instance, there was a shortage of potassium, but he had been adding fertiliser that had high nitrogen content. His yields improved soon.

Pest management was another area that needed intervention. Lack of understanding about the pests infesting the fields led to incorrect usage of pesticides. Farmers were introduced to pheromone traps: These are yellow and green gum bags that attract insects. Checked once a day, they give a clear idea of the type of pests in the area; pesticides can, therefore, be sprayed accordingly.

Another problem was the rising cost of fertiliser, pesticides and nutrients supplied by Bayer CropScience. Here, HUL worked with the state government to arrange for subsidies. The company believes this initial push was necessary. Once the farmers appreciated the benefits, they would no longer hesitate to pay for the inputs. Consequently, the cost of the pesticide kit came down from Rs 5,200 to Rs 2,600. Soil testing was also subsidised. Farmers pay Rs 250 instead of the usual Rs 500.

HUL also conducts training sessions where small groups of 12 farmers are explained the benefits of drip irrigation. “Earlier, I thought setting up a drip irrigation system was a wasteful expense but after I saw the benefits, I installed it last year. This is money well spent,” says Tanaji Valu Dhatrak. Another advice that he has acted on is interspersing his tomato plants with grape growing vines. This helped him double his income.

Supporting Enterprise
Shashikant Dhatrak, owner of vineyards in and around Nashik, and his wife Manisha, an electrical engineer, are successful grape farmers (since people in their village are interrelated, everyone has Dhatrak as surname). In 2010, the couple spotted an opportunity in the agro processing space. They knew that Nashik was among the top tomato growing regions in the country, yet there were few processing centres. They decided to step in to fill the need gap. After scouring the globe, they settled on processing equipment from Rossi Catelli (Manzini) in Italy. “I did everything by myself. I put my engineering knowledge to use and made sure I didn’t hire a consultant,” says Manisha. Her total spend: Rs 40 crore. Once the plant was almost ready, she sent an email to HUL. As it turned out, HUL had been looking for a processor in that region and immediately signed her on. The machines at their plant now hum 24 hours a day.

Varun Agro, as the company is known, has set up collection centres across the district. Farmers have the option of depositing their produce here and coming back three days later for payment.

“This is much better than the mandi where we are not sure of when the money will come,” says Tanaji Dhatrak. He also says the rejection rate is much lower as the tomatoes will be processed quickly.

At the mandi, traders are wary of consignments that show signs of getting spoilt within a week. This meant that markets in the east, like Kolkata and Bhubaneshwar, were out of bounds for their produce. At Varun Agro, the tomatoes are cleaned, sent to a crusher, packed in septic bags and transported to factories across India to be bottled. Last year, the plant produced 3,500 tonnes of tomato paste.

The work being done in Nashik may appear to be a small step towards fulfilling parent Unilever’s commitment of 100 percent sustainable sourcing by 2020. But for farmers like Nandu Laxman Dhatrak, it is immeasurably significant.