In the wake of the Harvey Weinstein revelations, the #MeToo hashtag spread around the world like wildfire: #quellavoltache (this time) in Italy, #EnaZeda in Tunisia and #AnaKaman in Egypt (me too) 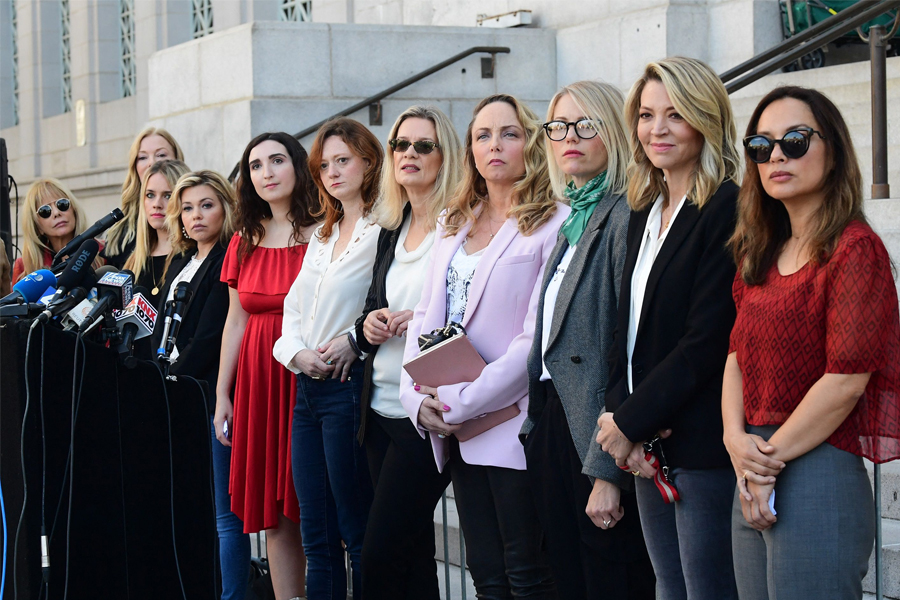 Hollywood actresses and others in a group of "Silence Breakers" who have fought for justice by speaking out about Harvey Weinstein’s sexual misconduct. Image:Frederic J. Brown / AFP

On October 5, 2017, The New York Times published a bombshell investigation into allegations of sexual harassment against one of the giants of Hollywood, Harvey Weinstein, who had until then proven untouchable despite rumors of misconduct.

The article proved to be a watershed moment, triggering what rapidly became known as the #MeToo movement.

Times journalists Jodi Kantor and Megan Twohey wrote about a subject wildly talked about inside Hollywood circles, but never broached in public: that the legendary producer behind "Shakespeare in Love" and "Pulp Fiction" had promised to help actresses' careers in return for sexual favors, had attempted to massage several of them in hotel rooms and forced them to watch him naked, then used his power to silence them.

The two journalists had been working on the article for months, using all their patience and ingenuity to convince the actresses to speak out.

So damning were the claims that it took just days for Harvey Weinstein to be fired from the company that bore his name. He tried to "sincerely" apologize, pleading that he had grown up in the 1960s and 70s, "when all the rules about behavior and workplaces were different."

His lawyers, for their part, strove to minimize the damage. But the movement had been launched, and the fall of this once all-powerful mogul, who had organized fundraisers for the likes of Hillary Clinton, was dizzying.

On October 10, another article followed in the New Yorker magazine, written by Ronan Farrow, who had also spent several months investigating.

Italian actress Asia Argento and two other women claimed to have been raped by the co-founder of Miramax studios.

As the days went by, others began to open up. One by one, leading actresses came out with their own stories, or pledged their support to victims.

Then on October 15, a tweet from actress Alyssa Milano lit the fuse on social media.

She too had read the avalanche of articles that followed the revelations about Weinstein.

"If you've been sexually harassed or assaulted write 'me too' as a reply to this tweet," wrote the star of "Charmed."

Her post triggered a deluge of testimonies from people from all walks of life, many of whom said they were sharing their experience in public for the first time.

In the wake of the Weinstein revelations, the #MeToo hashtag spread around the world like wildfire: #quellavoltache (this time) in Italy, #EnaZeda in Tunisia and #AnaKaman in Egypt (me too).

Milano helped ignite the movement, but the original #MeToo hashtag was coined 11 years earlier, in 2006, by African-American activist Tarana Burke.

She had begun using the expression of "empathy" as a way for victims of sexual violence, especially those in marginalized communities, to establish connection amongst themselves, and to say it out loud to the world.

"Initially I panicked," Burke later said. "I felt a sense of dread, because something that was part of my life's work was going to be co-opted and taken from me and used for a purpose that I hadn't originally intended."

Milano, who said she was unaware of the genesis of the phrase, quickly gave the activist back what was hers.

"What the #MeToo campaign really does, and what Tarana Burke has really enabled us all to do, is put the focus back on the victims," Milano said in an interview on "Good Morning America."

"This is just the start, and I've been saying from the beginning it's not just a moment, it's a movement and movements take time," said Burke, with Milano at her side, in a 2017 appearance on "The Today Show."

Weinstein was sentenced in 2020 to 23 years in prison for sexual assault and rape.

Kantor, Twohey and Farrow were awarded the Pulitzer Prize in public service for the reporting that brought him down—and triggered a global reckoning.

Tweets by @forbesindia
Why artists are considering giving up on Instagram
Jio or Airtel: Who will win the race to 5G in India?