The Volvo XC60 is a very handsome SUV

In the mood for the finer things in life? Let the Volvo XC60 be of help 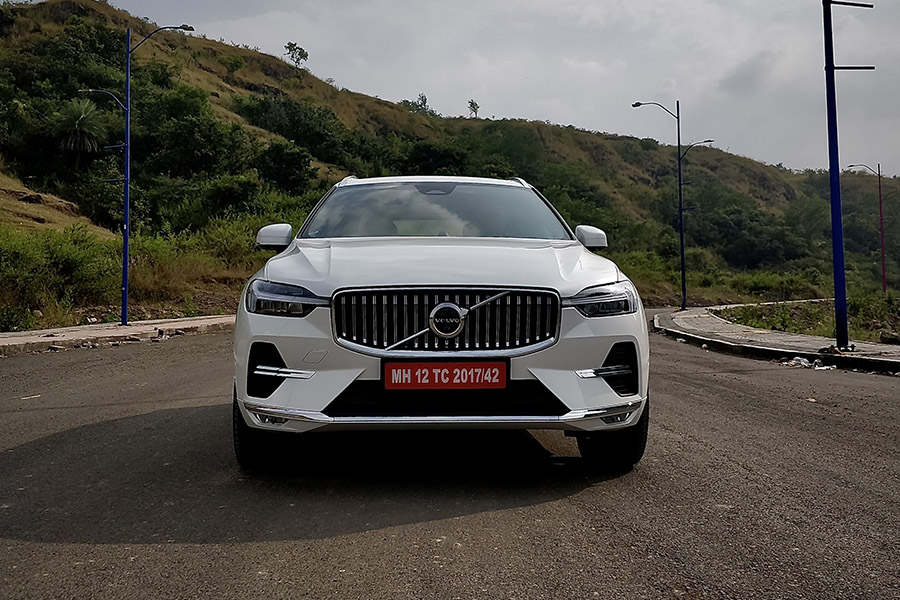 This is a good thing for Volvo. The thing I love is that on the objective spectrum of good versus bad design, Volvos rarely, if ever, tend to sway toward the latter. I’m not just speaking for myself; this is very much a consensus gathered through countless threads online and reviews.

The XC60 is a shining case in point. A harbinger of what’s to come by Volvo because of the sheer acceptance it has gotten the world over. Even here in India, a significant portion of Volvo’s sales are due to the XC60, and it’s not hard to see why.

The three-second decision with this one? I had no issue relaxing my instincts with it, because what you see is very much what you get with the XC60, and that’s a whole load of class and opulence. It’s not intimidating in the least in the flesh, and neither is it diminutive. The Swedes really know their way around making a well-rounded design, that’s for sure.

There’s plenty of reasons that bolster this train of thought. The lovely Thor’s hammer-headlamps are an indication of a strong, dignified personality awaiting you, and allied to the nicely designed grille and the iconic tail-lamps design, there’s no mistaking the XC60 for anything but a very handsome luxury SUV. The very fact that it mimics the XC90, I believe, is a big plus in the XC60’s arsenal. 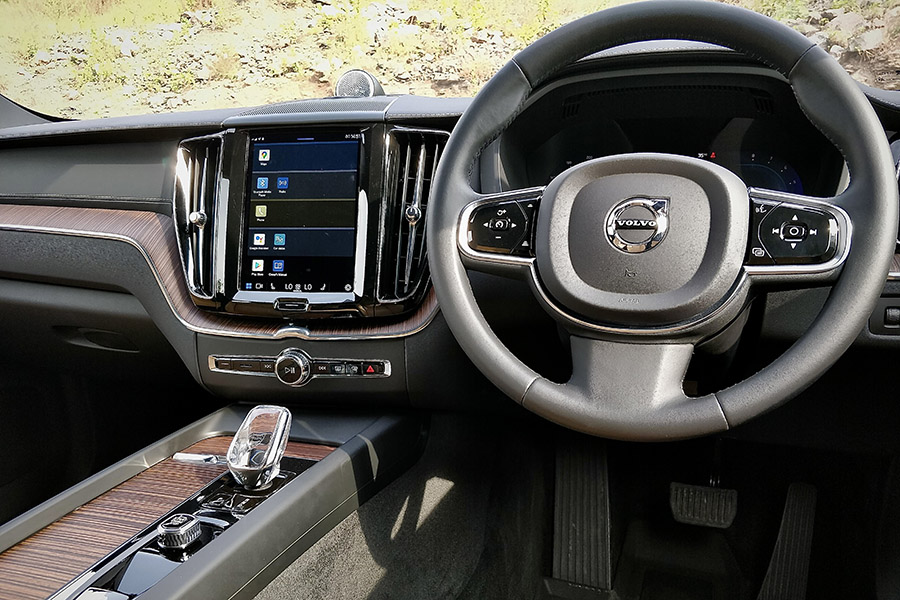 There’s Pilot Assist, which makes sure you don’t veer over into the next lane unintentionally

Where the XC60 really speaks to me, though, is on the inside. It’s restrained, no doubt, but there’s so much to love here, be it the iPad-esque touchscreen infotainment in the middle of the dash, or the way the gear-lever sports a glass finish, or the very obvious theme that Volvo has followed of form over function (not that it’s omitted focus on function, of course). The all-digital instrumentation was a personal highlight, and I absolutely loved the fact that the steering wheel felt delightful to grip; it’s just the right size for this car.

And when it’s this nice a cabin, it begs to be shared. So when you’re driving four up, you can rest assured that each and every one of your passengers will be as comfortable as you intended. There’s a wealth of legroom at the back, enough shoulder- and head-room, and the seats themselves feel like they’ve been crafted specifically for long distances.

Enroute, there’s a sumptuous 15-speaker Bowers and Wilkins sound system that, honestly speaking, is one of the best sounding stock systems I’ve heard in a car in a long time. You can even toggle listening preferences via the touchscreen to mimic an opera house or a jazz club. Gimmicky? Not quite when it’s done so well. 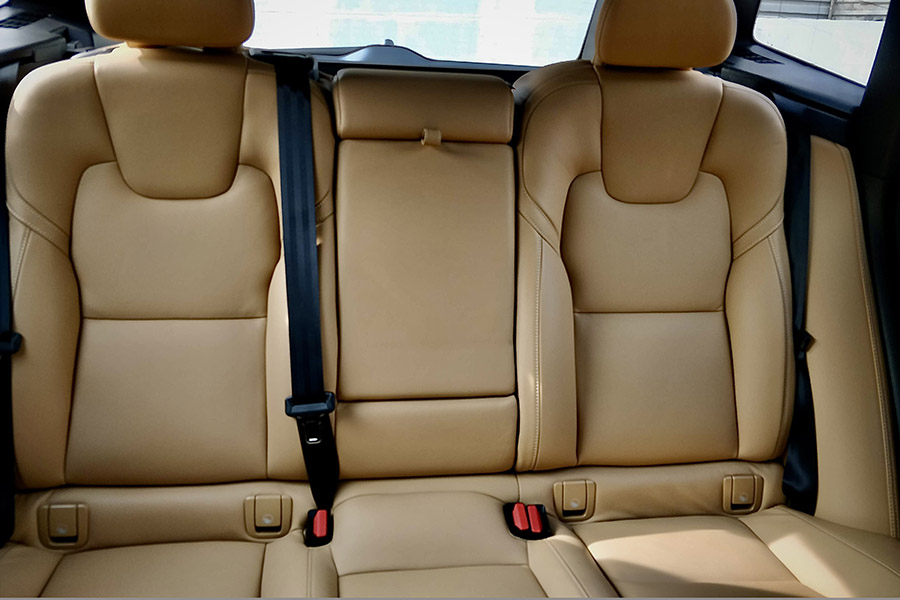 It is the ideal luxury family SUV

Continuing on with the gadgets available in the car, you can rest assured feel pampered in the XC60 thanks to stuff like cooled and heated seats with a massage function, four-zone climate control, Volvo’s adaptive headlamps that bend in the direction of your steering angle (super useful in low-light parking conditions, by the way), and the very intuitive suite of radar-activated active and passive safety systems that Volvo’s famed for.

These are all aimed at making your driving experience comfortable certainly, but over and above it’s about safety. Autonomous driving tech is starting to make its presence felt in newer cars in India, so it’s lovely to have stuff like adaptive cruise control. What this does is, once activated, it keeps pace with the car in front of you by automatically accelerating and braking. The benefit of this, obviously, can mainly be reaped on wide, well-marked roads like expressways and highways, but it’s such a nifty feature to have. All you have to do is take charge of the wheel, and it’ll manage the rest.

There’s also Pilot Assist, which makes sure you don’t veer over into the next lane unintentionally. It enforces this by exerting pressure onto the steering wheel in the direction of the lane you’re already in. Then there’s stuff like collision mitigation, which automatically slams the brakes for you while you’re reversing, as an example, and you’re about to collide with a vehicle or a pedestrian. And finally, there’s blind spot alert and even park assist. My initial thought was that these systems, as well-intentioned as they are, might interfere with our non-regulated traffic and be a hindrance more than a blessing, but it was fine. Volvo’s somehow managed to get it suited to our conditions just fine, and that’s a real blessing. 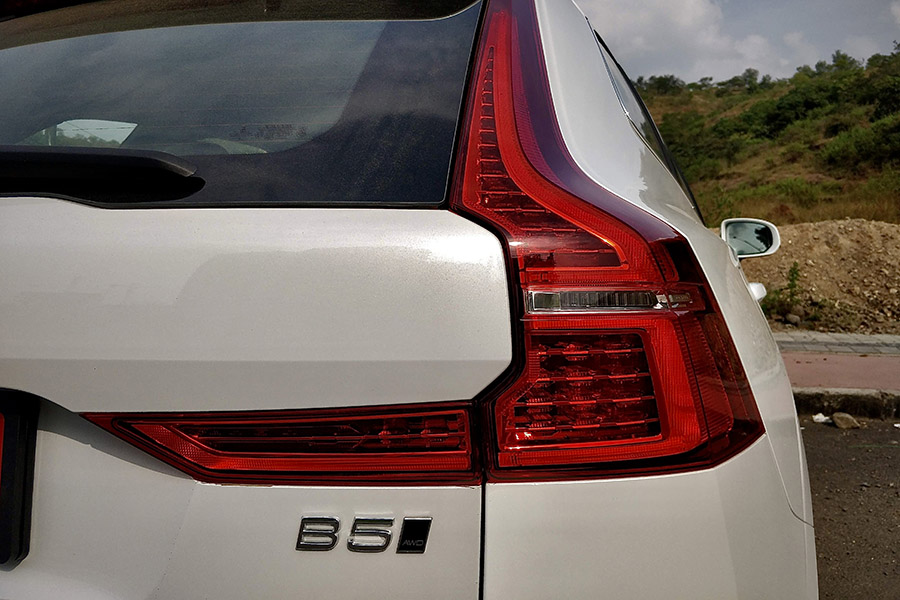 Of course, this story would be incomplete without getting to know what the XC60 is like behind the wheel, and just like the rest of the car, it’s exactly what you would expect of it. The one you see in the pictures is the B5, which is Volvo’s way of saying there’s a 2.0-litre petrol engine sitting under the hood. It makes a more-than-adequate 245 hp and 440 Nm, and all that power goes to the front wheels via an 8-speed auto box. It’s not a particularly punchy motor, but that said, it’s not underwhelming, either. There’s a good amount of power spread all across the rev range, and in that sense, the XC60 makes for a very relaxed cruiser. Curiously, this update to the XC60 comes only in the B5 spec, whereas previously there was the option of a diesel, which I’ve also had a go in. The difference between the two is mainly noted in the amount of noise that filters into the cabin—the diesel’s a lot louder.

Aside from that, the XC60 rides exceptionally well, even over broken bits of tarmac. There’s absolutely no need to worry about any abnormal speed breakers and humps because there’s more than enough ground clearance to go around, and at a claimed 11.2 kmpl, the XC60 is fairly good at being frugal with fuel consumption as well. Clearly not much to fault here.

So is it the ideal luxury family SUV? I’m very tempted to say yes. There’s a certain calm, mature and refined take on life that shines through when you’re in the XC60, and once you combine that with oodles of space, comfort, refinement and plenty of features to keep you busy, not to mention the life (and face)-saving safety tech that’s crammed in, it’s hard to wonder why you’d go anywhere for a great all-in-one. Am I surprised writing this? Not one bit. Volvos have been on this steady diet of perfection for a while now, and deserve their moment in the sun. The updated XC60 simply adds to that list of Volvos.

Tweets by @forbesindia
CLOUDSEC 2021 validates that in future 'the cloud is the after limit'
Why Singapore, Zurich and Oslo are the world's 'smartest' cities