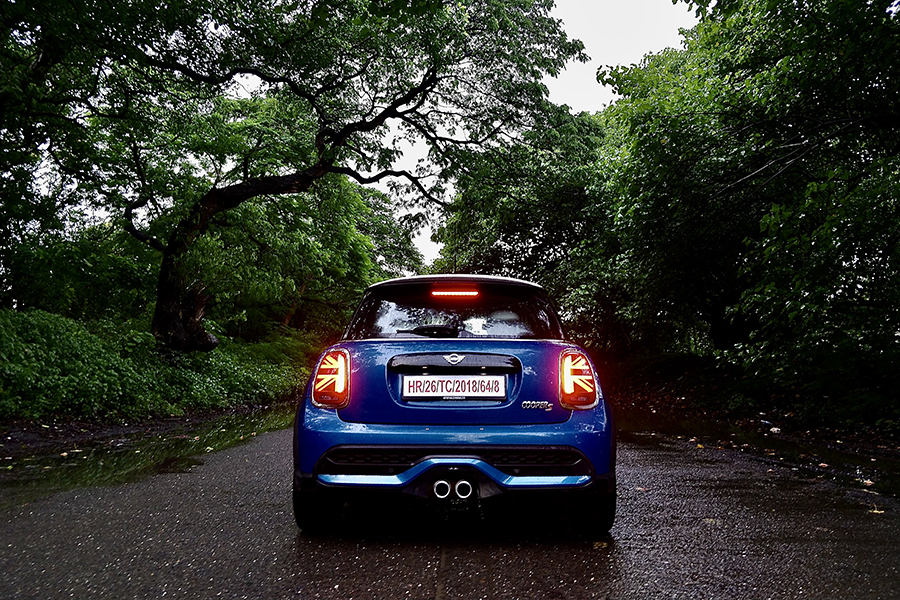 Arguably the best angle of the new Mini Cooper S

“I don’t get it. What’s new?” quipped my co-passenger. That’s the trouble, really. For someone—anyone—not entirely clued into a specific world, it takes practised eyes to literally spell out changes that have taken place. In a sense, I sympathise. Change can be made more obvious to broaden the appeal. Then again, a little reading-up rarely hurt, right?

Where am I going with this? The refreshed Mini Cooper S, here in its three-door guise, is, as I mentioned, refreshed. Mini hasn’t flipped the car upside-down, shook it violently to dislodge rusty, broken things and gone to town on it. There’s a well-worn quote that questions the need to fix something if it isn’t broken in the first place, and that fits in perfectly here.
I’ve long been an admirer of the way the iconic Cooper has conducted itself through the years. More often than not, it’s subtle changes that come to the fore. I love that. In this instance, the simply devised and constructed nose with a grille that stretches all the way to the base of the bumper—in itself also new—is a classy touch. Subtle hints of a more aggressive stance come by way of the prominent vents in the bumper and a full-black mesh-finish grille, the roof-mounted spoiler and the tastefully done alloy wheels, which are still at a great-looking 17 inches. 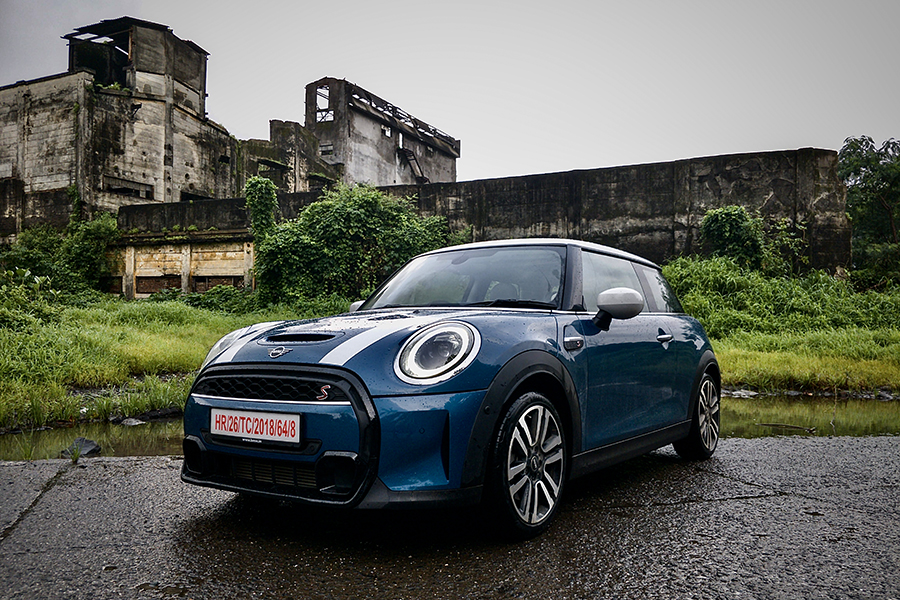 Subtle changes to the iconic Mini face. Still a great looker!
That’s what’s new on the outside. Simple, minimal updates. Not noticeable to the untrained eye, but that’s not the name of the game here. Take a peek inside and a similar theme erupts. What dominates your senses, of course, is the unmissable (and standard) 8.8-inch circular touchscreen in the middle of the dashboard. This really is ground zero for most of what you have to do in the Cooper. You can toggle your media, navigation, parking cameras and a whole load more. The coolest update, though, has to be the optional 5-inch digital instrument display. There will always be people who mourn the death of analogue dials and buttons, but this writer falls squarely out of that camp, and proudly so. New and shiny trumps worn-away and rusty.
I digress. The resolution for the said digital instrumentation could be better, but it’s a wonderful looking thing nonetheless. It complements the funky, quirky cabin wonderfully, and that’s what I like most about the Cooper. There’s so much that’s not like anything else around. Speaking of which, this particular Cooper is the three-door spec, which means four seats, but the only way to access the rear seats is to fold away the fronts and shimmy in. It’s admittedly not the easiest way to get seated, and rear legroom is a joke, if I’m frank. At this point, most would suggest utilising the rear space for children, at best, but I’d advise against that as well. Grocery bags, transporting flower pots (which I actually did), and dogs—best use case scenarios for the rear seat of the Cooper 3-door.
Where it redeems itself is in the tech department, because there’s no shortage of that. LED headlamps (for which there’s a cutaway through the bonnet—great for photo-ops involving stuffing your head through said cutaways), auto wipers, rear parking sensors and a camera as well, auto climate control, ambient lighting… the works, essentially. It’ll keep its occupants safe as well with dual airbags, ABS, traction control and stability control among the highlights. I do have to admit that I was hoping and praying Mini would send over the Cooper convertible instead of the hardtop you see in the images. Practicality-wise, sure, it makes about as much sense as fire-resistant matches, but who can resist the urge, even in this weather, to drop your top (in a manner of speaking…)? 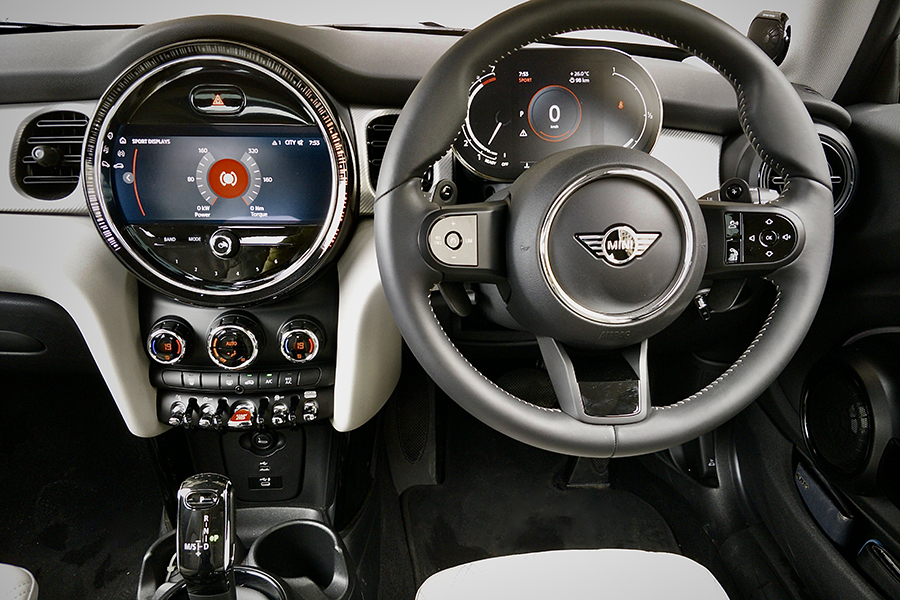 Hard not to love the Cooper's cockpit. Digital instruments are new.
And since I’m asking for things I couldn’t have, the JCW Cooper would have been mighty welcome. That’s primarily because of the 231 hp and 320 Nm output. These may seem like relatively modest figures, but in combination with the Cooper’s tiny footprint and low weight, it’s an assault on your senses. I can say that with confidence because I’ve driven the previous-spec JCW Cooper, and the pops and bangs emanating from the rear of the car on every downshift still reverberate happily in my mind. That said, what I have here is absolutely no cause for complaint. There’s a 2-litre turbocharged petrol engine at play here, and that’s the only way you can have the Cooper S now, with the output slightly down compared to the JCW at 192 hp and 280 Nm.
It still comes with drive modes, and just like the previous Cooper, each mode makes the car behave in a radically different way. This is a point worth noting because more often than not, drive modes in cars are a little more than a gimmick, if I’m honest. So you get ‘Green’ and ‘Sport’—the former being the slower, more economical mode, while the latter sharpens up throttle responses and gearshifts—with ‘Normal’ slotting in as the middle ground. 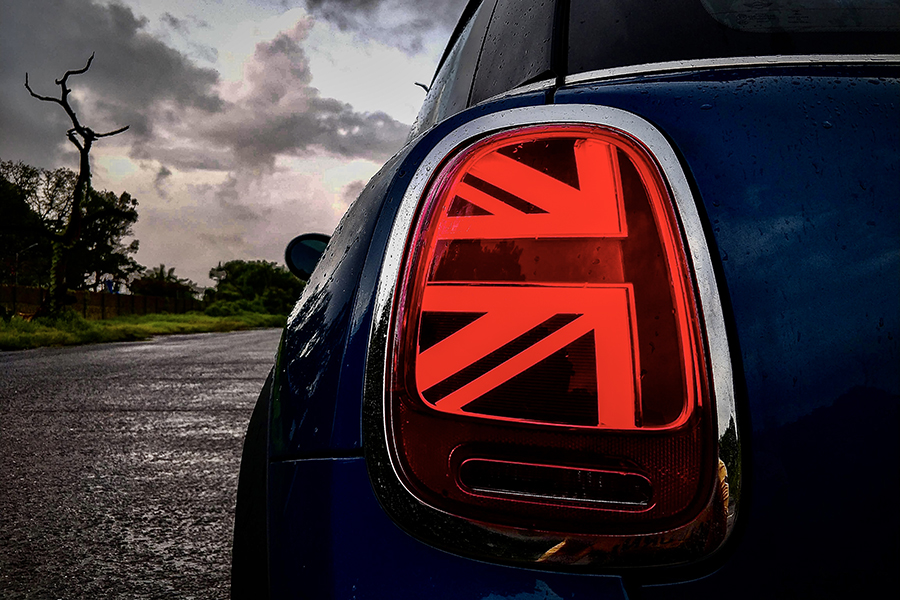 The Union Jack tail-lamps are a sight to behold. Beautiful detailing!
Now, Mini hasn’t done much in terms of revisions to the engine, so it still behaves just as it did before this update. And while more power is always welcome, the Cooper wasn’t in desperate need for it. It is still wonderfully quick, and what helps is that the steering, the brakes, and the gearbox all hum the same tune, so to speak. They’re all on the same page, so you always get this sense that it’s a very connected drive experience going on. And that’s how it’s supposed to be because the feeling behind the wheel is a crucial component to the Mini experience.
And this is where the real star of the show comes in. Mini’s done some stellar work with the suspension setup for this Cooper. If I had one lingering complaint about the previous Cooper, it was that the ride was too harsh. What does that mean? It’s great if you’re driving hard and fast on a smooth, paved piece of tarmac, but it’s absolutely brutal if you plan on driving the car everyday on, well, our roads. But you can say goodbye to that, because the Cooper now rides so well. And it’s not just good at soaking up bumps at slow speeds; it’s somehow managed to get the suspension setup perfectly enough for when you’re gunning it down an expressway and showing it some twisties, too. The Cooper S 3-door and the Convertible, however, ride on 17s. Could the JCW’s optional 18s erode that progress? I hope not. 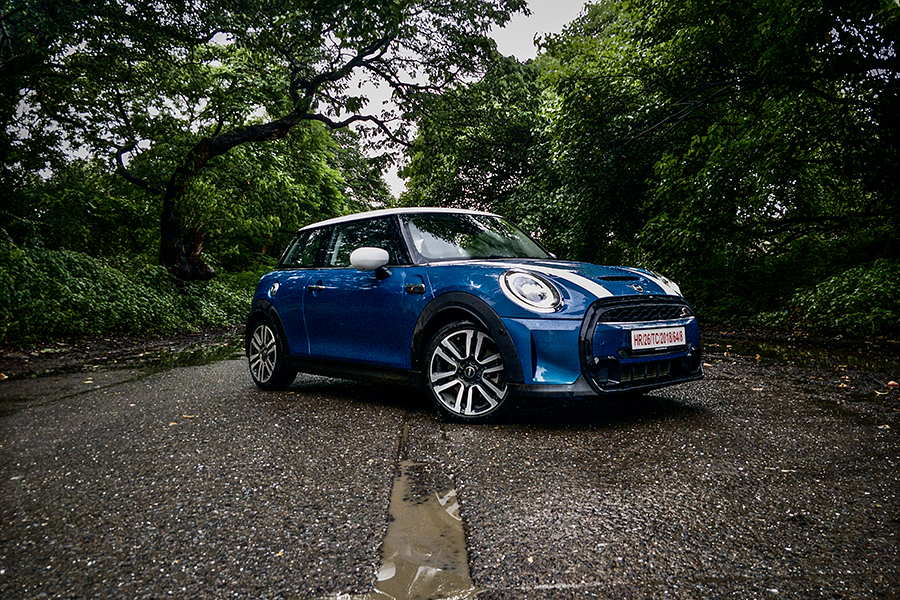 The 3-door's petite dimensions make for a striking car. Hard not to get noticed.
What this little tweak has done is vastly improve the desirability quotient of the Cooper. It not only has the legs to act as your daily driver (with the caveat of you not having to transport more than two people at a time, of course), but, dare I say it, it’s actually looking quite good for the long run, too. It’s an iconic little design that will get you noticed, packs in a lot of goodies for the money you pay, drives like a peach and small bits like the stripes along the car and the Union Jack tail-lamps make this, in my opinion, hard to ignore. Now, about that JCW…

Tweets by @forbesindia
In the face of neurotechnology advances, Chile passes 'neuro rights' law
Home Works: A collection of the best home offices