With dual-tone exteriors, plush interiors and better ride quality, it is a much-deserved upgrade to the ageing Fortuner 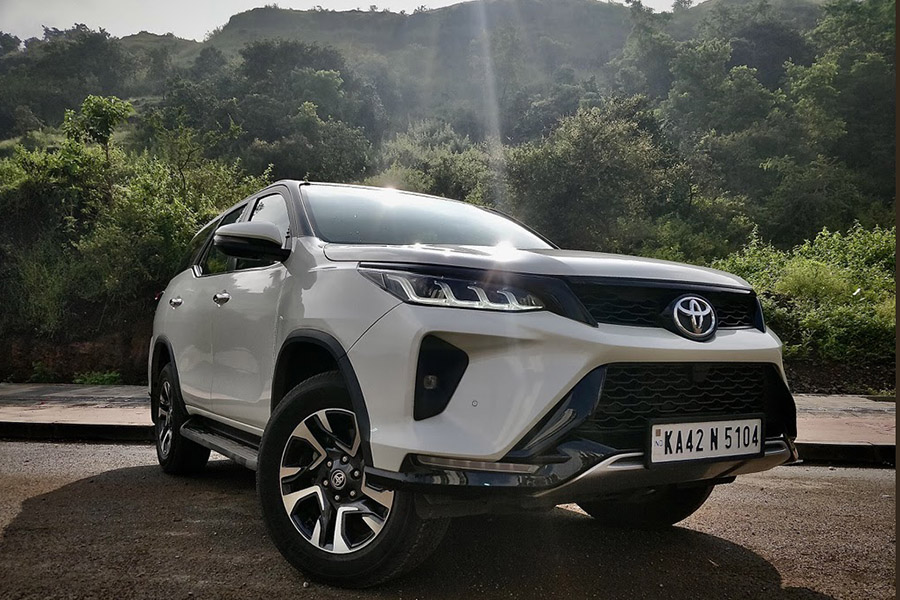 As a country, our fascination with beefy, burly and dominating vehicles is staggering. If I were to narrow that description down further, well, SUVs. We love our SUVs. A fair few car manufacturers have, in fact, been put on the radar only after debuting an SUV of some sort, and this applies so well with Toyota.

As you might have figured by this point, the topic of this piece isn’t the Qualis, or even the Innova for that matter. It’s the enormous Fortuner—an icon, of sorts, in the SUV world in India. This one, however, isn’t any ordinary Fortuner. Born, quite possibly, out of the need to go more upmarket, this particular SUV sits above the Fortuner, and Toyota’s slapped the ‘Legender’ moniker on it, quite proudly.

A fair few details set it apart from the regular Fortuner. For a start, there’s the unmistakable dual-tone finish for the exterior, which makes it look, in my eyes at least, far more distinctive and appealing. There’s a certain definition and sharpness that lends the Legender a much more premium feel. A sharper nose, a slimmer grille and air dam, and that, allied to the updates the Fortuner already received, makes this quite the handsome SUV. Road presence is one thing you can’t possibly be short of with the Legender.

On the inside, Toyota’s gone out of its way in an attempt to pamper you. Now, I do have to admit that the two-tone seats are a bit garish for my taste, but it’s a matter that’s subjective at the end of the day. What’s objectively great is that there’s ambient lighting, wireless charging, an electronic rear-view mirror, plenty of connectivity via USB ports and 12 V sockets, not to mention Apple CarPlay and Android Auto, and a much-needed, larger 8-inch touchscreen for your infotainment. Toyota’s even added the kick sensor at the back so that you can swipe your leg under the car and have the hatch open automatically for when your hands are full. Clever. 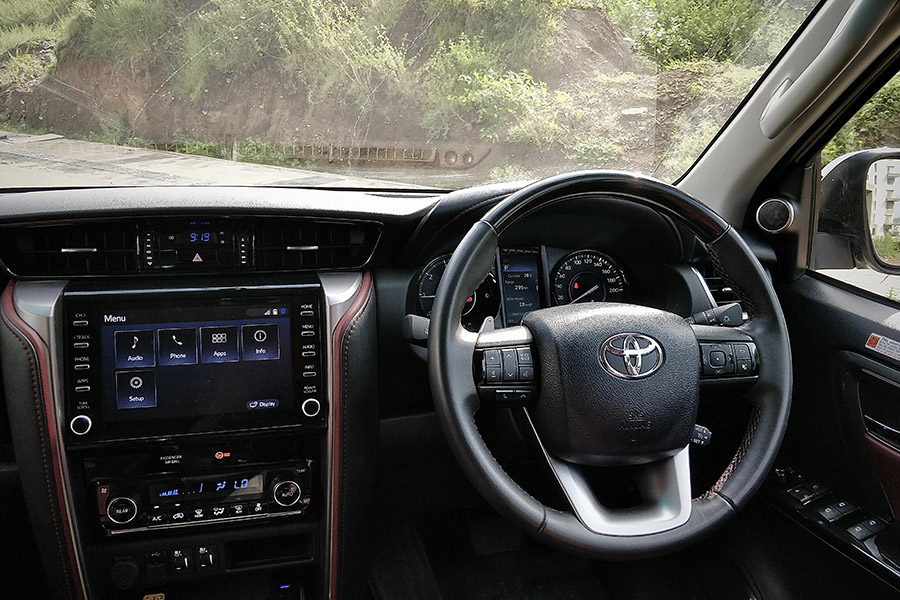 The 6-speed auto box does come with the option of paddle shifters on the steering boss, but it’s better left to its own devices is my sincere advice

I also love the fact that the front seats have a cooling option. It’s an oft-overlooked feature that’s much-needed for our climate. My only gripe is that it’s quite noisy in its operation. So much so that it sometimes overpowers the actual air-conditioner. I guess you win some and you lose some. And since we’re on the topic of not-so-great bits, Toyota could have done some good by throwing in a powered third row of seats. In most situations, the third row is never used, so it would be nice to have an option of folding them away automatically to liberate some boot space. And more than that, I’m sure people would like the option of a sunroof, or at least a glass roof to make the cabin feel a touch more roomy.

But these are minor niggles in what is a genuinely well-packaged SUV, a thoroughly deserved refresh to an ageing car. Speaking of which, the motive power also gets an update. Toyota’s done a lot of smart things to the engine. To that effect, there’s more power (204 hp), achieved by the use of a more powerful variable nozzle turbo. But the biggest bit of news is the amount of torque it makes. At 500 Nm, even for a car of this size and weight, it’s no small deal. The icing on the cake is that it’s accessible right from the lower reaches of the rev range, so you’re never left wanting, be it a quick overtake or just getting around in ambling traffic and squeezing into a fast-closing gap. 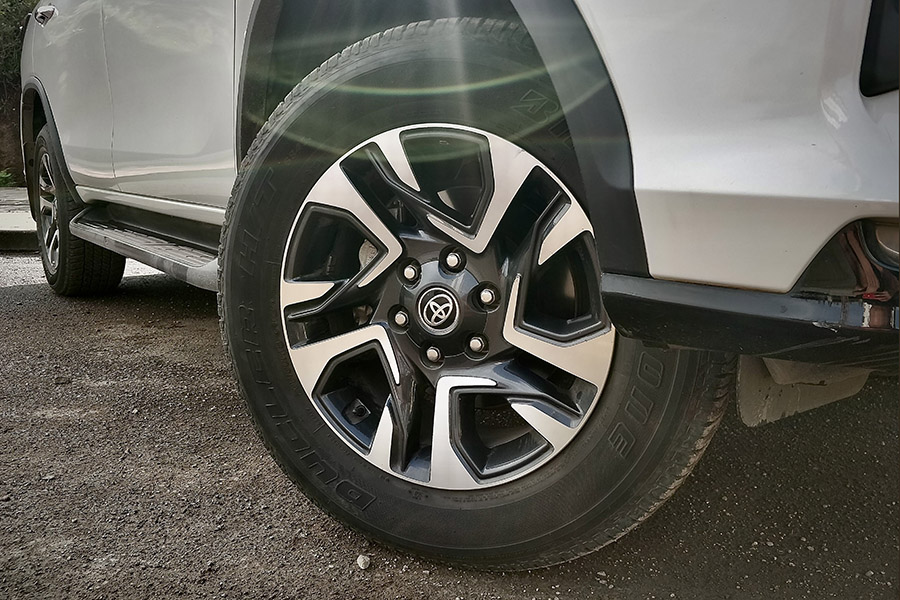 The definite highlight for the Legender, though, is the way it tramples bad road surfaces

Keep in mind, of course, that this is now updated to comply with BS6 emission norms. That usually leads to a drop in performance, so kudos to Toyota for bucking that trend. Now, a constant gripe I had with the previous Fortuner was the fact that it was far too loud while on the move. The Legender has made a stride or two in this department, so it is a lot more refined now, although I have to admit that things do get a bit vocal once you push the car. There’s no doubt about the fact that it rides much smoother now, though. And it even corners with a bit less roll as far as memory serves.

On the move, you even have three driving modes to play with: Eco, Normal and Sport. These modes, however, don’t do too much to the driving characteristics. Sure, the accelerator input gets progressively sharper as you move up from Eco, but I would have loved it if it altered gearbox and steering responses, too. The 6-speed auto box does come with the option of paddle shifters on the steering boss, but it’s better left to its own devices is my sincere advice. It is a genuinely lovely gearbox, that said. Perfectly adequate for day-to-day driving, and good enough if you’re intending to cruise out on the highway. 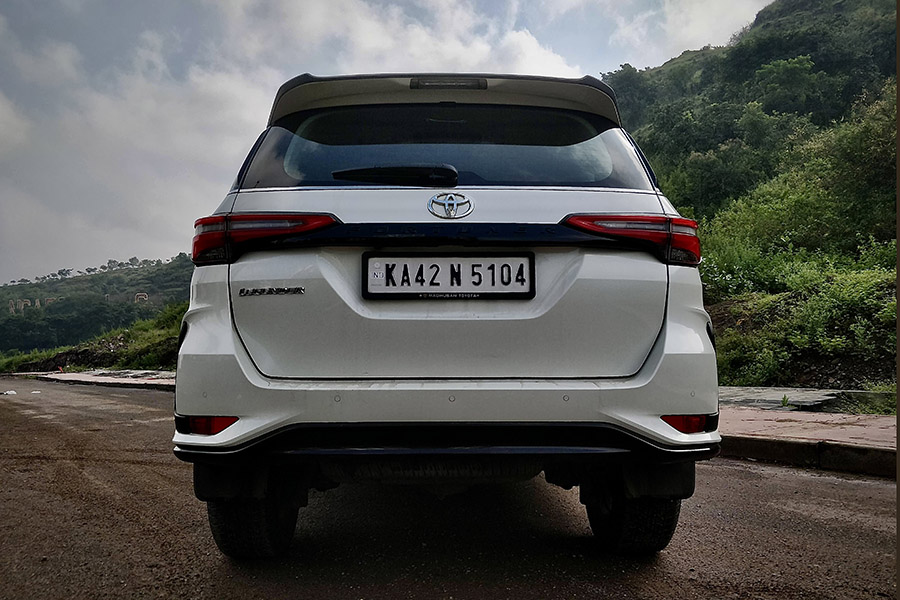 Toyota’s kept it simple with the Legender

The definite highlight for the Legender, though, is the way it tramples bad road surfaces. This is still a body-on-frame setup, mind, but improvements to the suspension setup have made the Legender a formidable companion on rough roads. I can’t tell you how many times I slowed down over potholes and craters, did the obligatory wince and squirm as it went over it, and then realised that I didn’t need to bother in the least. It truly is a go-anywhere vehicle, the Legender.

In the end, my time with the Legender was memorable, to say the least. Just to keep things in check, I have to admit that I wasn’t blown away by it. Then again I didn’t expect to be. Toyota’s kept it simple with the Legender. Keep its strengths spaciousness, durability, off-road readiness and immense road presence, and add a generous dollop of creature comforts, updates, and style to the equation. And to that effect, Toyota’s nailed it. This also means that you’ll have to shell out a fair premium for the Legender, but it’s worth it in my mind. You’re paying for the badge’s legendary reliability, and you’re also getting a car that’s as SUV as an SUV gets. Hard to fault, really.