Even as it remains a Mini at heart, it strikes a perfect balance of sticking to its roots and being modern 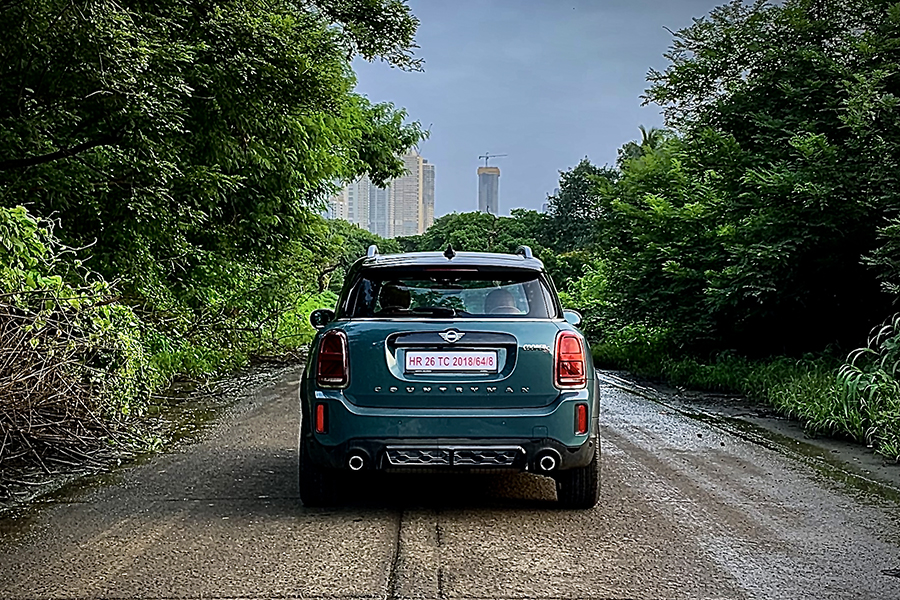 Fairly understated, but the Countryman is unmistakably a Mini.

At the onset, I’d like to begin with an unbiased bit of truth—I don’t see the point of the Mini Countryman. Its little brother, the Cooper, yes, of course. The 3-door hatch is one of my favourite cars to drive. But this? A slightly elongated, 5-door version of the same recipe? Who’s waiting with bated breath for this, really?

So when Mini called and asked to send the car over for a few days, I said sure, can’t see the harm. Unlike other cars, however, I felt no itch to drop everything I had lined up to simply go and drive the pants off of it. But in the interest of fairness, I decided to swallow my lethargy about delving deeper into the Countryman when it showed up.

Here’s the funny thing. I didn’t regret it even one bit. The new-for-2021 Countryman will do that to you. It creeps into your sensibilities faster than caramel popcorn did for me (another thing I was dead set against initially, to be frank). All you need is a little time with it. 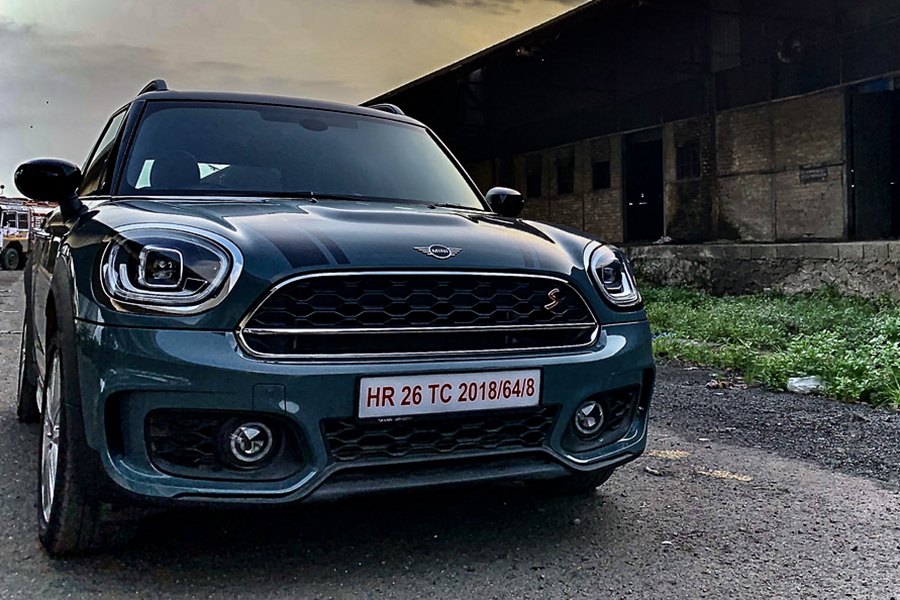 Cuts and creases adorn the Countryman's fascia, and it's all the better for it.
Time enough to notice that subtle changes across the board have come together to make quite a complete car. It starts right at the front; the revised nose, the new bumper and the tweaked grille that sits in between the LED headlamps. It’s not in-your-face good-looking but it grows on you rather fast. And just like in the refreshed Cooper, the tail-lamps get the lovely Union Jack LEDs that look absolutely stunning come darkness. The Countryman rides on 17-inch wheels, which I absolutely love the look of. There’s something mighty appealing about a car that maintains a perfect ratio of wheel size to the metal hugging the body.Step inside and it screams Mini, and that’s a lovely thing to behold. You’ll notice a panoramic sunroof, powered front seats with a memory function for the driver’s side, dual-zone climate control and, of course, the unmissable Mini trademark—the 6.5-inch display smack bang in the middle of the dashboard that just gets better with every iteration. 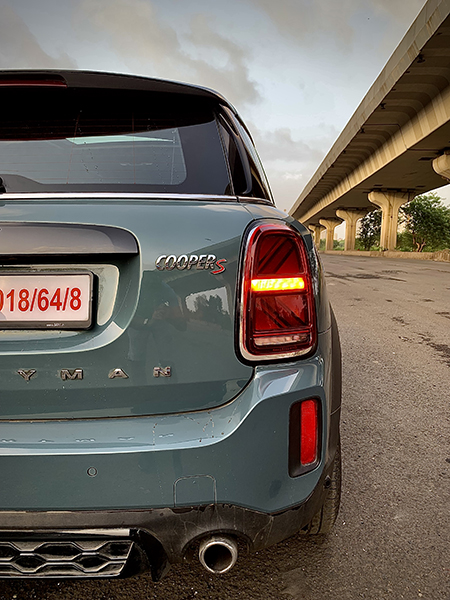 While I was a big fan of the previous Countryman’s predominantly analogue instrument cluster, this one looks and feels thoroughly modern, and it’s not done at the risk of trying too hard or alienating the charm that’s consistent with the Minis we know and love. The delicate balance of sticking to its roots and staying modern is something Mini’s managed with remarkable finesse.It’s at this point while running through the Cooper that I was scared to progress. Being a 3-door, four-seat hatch, you can pretty much count the rear seats as a write-off. But it’s not so in the Countryman which, despite being only incrementally larger than the Cooper, is remarkably spacious when it comes to back seat space. You could fit three in with ease, and there’s a healthy amount of boot space, too, which is just so nice to see considering this is a Mini at the end of the day. 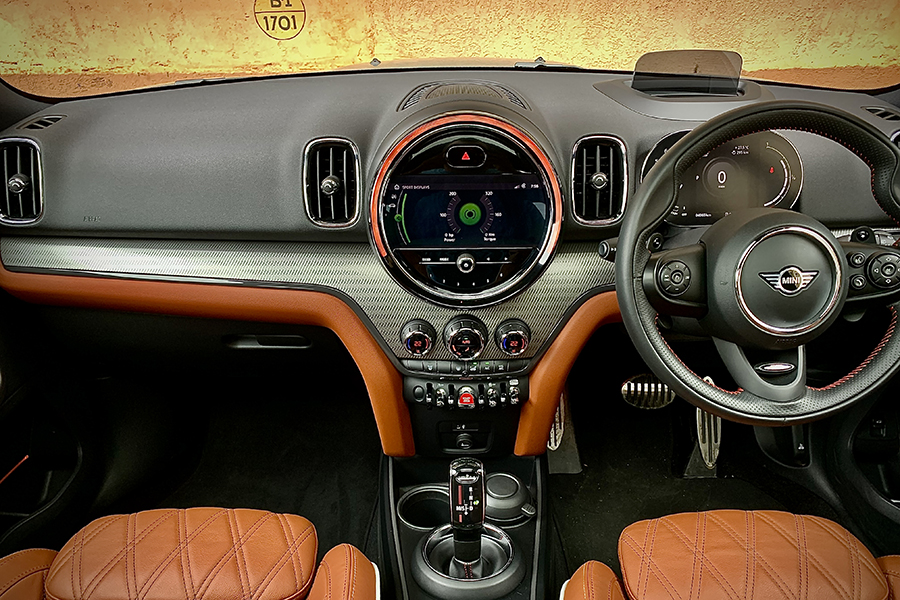 Round and round we go. Mini's definitely following a theme for the Countryman's cabin.
What of the motive power, then? This, the 2021 spec Countryman S that you see here, is powered by a 2.0-litre turbocharged petrol engine that puts out 192hp and 280Nm. Those may sound like relatively meagre numbers, but it works in a car of this size. It’s the same engine found in the Cooper S, and while it’s quite potent there, I figured the extra size and weight of the Countryman might dull the experience somewhat. No such thing, as it turns out.

The Countryman is every bit as sprightly as I thought it needed to be, and the lovely bit is that the 7-speed dual-clutch auto gearbox just does the job of complementing the engine and putting the power down to the front wheels so well, it actually makes you sit up and do a rethink about all your preconceived notions. It’s not often you find cars doing that to you, to be honest. 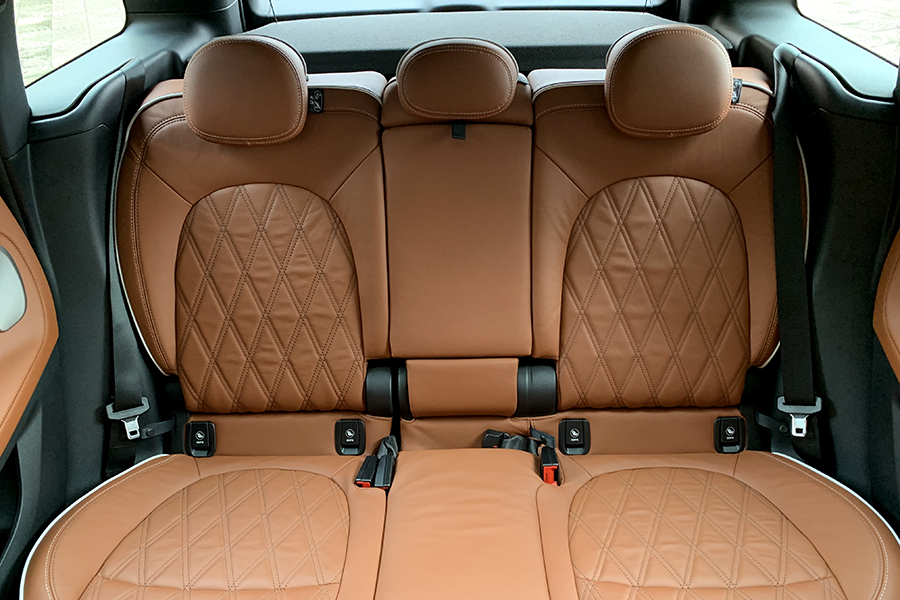 Thinking of seating three at the back? Don't think twice.

At this point, having felt like a complete tool that I judged a car too soon, I found myself trying to liven up the drive somewhat more by trying to expose some of the Countryman’s weaknesses. In my book, the fastest way to achieve that in a front-wheel-drive car with a long wheelbase is to find a few corners and attack hard. Understeer? You bet. But as much as I was expecting? Not even close. The lovely thing here is that Mini seems to have set the car up perfectly. It’s managed a perfect compromise of being fun to drive and giving you a smooth ride over bumps. Even the best of the best struggle to get that balance right.

The steering is communicative, the car doesn’t roll too much around corners, and the gearbox seems to know exactly what you want. Drive modes? They’re there, and just like in the Cooper, the car, to my ears at least, sounds the best in the ‘Green’ mode strangely enough. But if you are going to be hurling the car around corners and pushing the car hard, it’s best to stick it into ‘Sport’. Accelerator responsiveness and the gearshifts are a lot more in tune with the pace you’re trying to achieve.

Of course, all this is with reference to the ‘S’ spec. There is also the option of the Countryman JCW, one that Mini didn’t seem to have on offer at the time of writing this unfortunately, and that bumps up the power enough to make you go, “Why is the ‘S’ an option?” Pity then that I didn’t get to have a go in it. Oh, side note: The JCW pack makes the Countryman an absolute screamer, so don’t get one if you have sensitive neighbours or, well, if you live around people who have functioning ears. 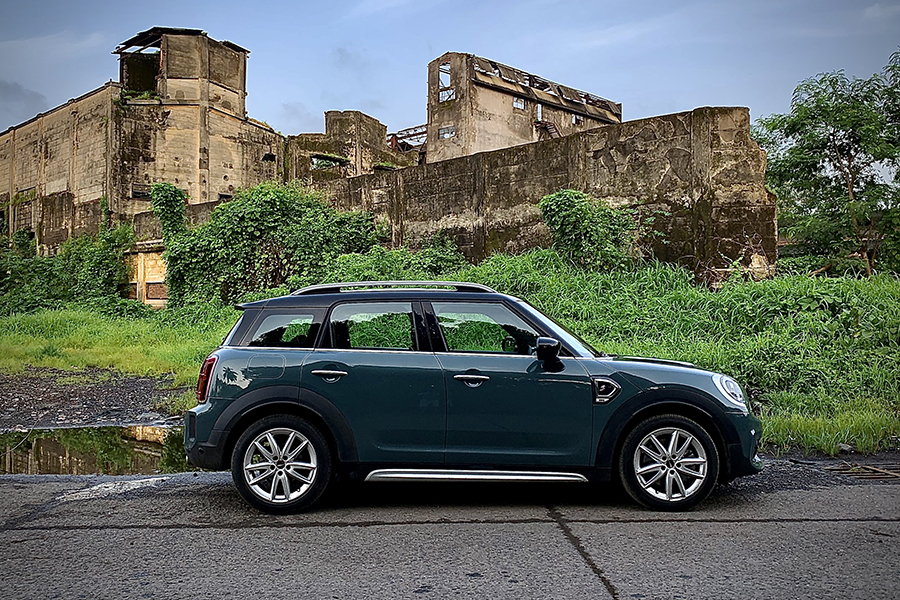 The ideal second car for your immodest garage? Might well be!
I’ve long maintained that the true mark of a car being good, however vague a definition it may be, is that it makes you think long and hard about it once you shut the engine off and walk away from it. As I mentioned at the start of this story: The Countryman made no sense to me at all. But the sheer tenacity the Countryman displays at winning you over with its bag of goodies is all that I needed to see to know that Mini’s lost none of its fight. It wraps itself around you, makes you wonder what your predilections about other cars are and why, and it does all of that while being an absolute charmer through and through.

The fun car that can be serious when you want it for you and your family? No doubt. But there’s more to the Countryman. It’s subtle yet brazen (and just the right amount, mind), silent yet thoughtful with all the features it parades, and it’s a comfortable car that’ll be more than accommodating for you to enjoy it with others. To cram all that into a Mini? Commendable. I told myself I’d be open to rediscovering what makes the Countryman tick, and I’m honestly glad I did. Try it. You’ll be surprised.Mini Countryman S Specifications:
Power: 192hp
Torque: 280Nm
Transmission: 7-speed, dual-clutch automatic
Dimensions: LxWxH (in mm): 4299x1822x1557
Price: Rs 51.43 lakh (on-road, Mumbai)

Tweets by @forbesindia
I'm a realistic investor: Sunny Leone
From the runway to the street, fashion is shaking off traditional notions of gender