As a culture, we don't celebrate learning: Ronnie Screwvala

A year after launching his online education company UpGrad, Ronnie Screwvala takes us on this new leg of his entrepreneurial journey 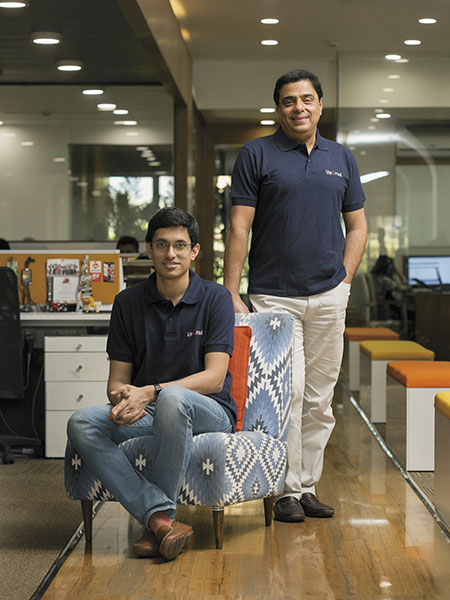 Name: Ronnie Screwvala, Mayank Kumar
Age: 60, 33 years
Designation: Co-founders, UpGrad
The Perspective: People are willing to pay good money for online education that will give them a leg-up in their careers


Over the course of my career I had built businesses and scaled them up. In 2012, after selling UTV to Disney, I was looking for my next challenge and I zeroed in on media. While I was certain that it was the education space I wanted to be in—I thought of education as the ‘ed’ in media—I had no clarity on what part of the education space I wanted to be in. For me, as an entrepreneur, it ticked all the boxes. It would allow me to bring in my deep understanding of the consumer, it would permit me to be disruptive, and this was a space in which we could scale up.

It was then that I was introduced to Mayank Kumar, who was with Bertelsmann [a German mass media company], and had spent many years consulting with education companies and venture capitalists wanting to invest in education. We met in 2014 and realised pretty quickly that brick-and-mortar was not the place for us as it would mean setting up one box [school] and then moving to the next. According to Mayank, in the K-12 space, there are multiple stakeholders—teachers, parents, the government—to deal with, and this can get cumbersome. Simply put, although the opportunity is huge, there was nothing here that we could disrupt and scaling up would take time.

Mayank and I finished our conversation without any thoughts on how we could collaborate, and it was only in the following year that we met again for a deeper dive on what area of the education opportunity we should tap into. At the end of our conversation, it was clear that it would be the online space that we would enter and we’d look at catering to the careers of tomorrow. Even a few years ago, a lot of positions, such as social media manager or UI/UX developer, did not exist. Now if someone wanted a job in these new fields, they’d need to equip themselves with the right skills. We wanted to tap into this opportunity, which we believe is massive. Mayank puts it very well when he says, “We wanted to be the fine dine of the education space and not the fast food.” That was also roughly the time we decided to collaborate. Mayank decided to turn entrepreneur and join me in building our company, which we named UpGrad.

While working on and deciding the programmes we would be offering, we’d agreed that data and digital would be our focus. While they may be niche themes today, in the future every career would have to relate to them. We also built this company with the credo that while we were starting up, we were not a startup. What do I mean by that? In a startup, people are typically learning on the job, and tend to make mistakes and learn before the model is perfected. We wanted to avoid that and made sure we picked a team that had significant experience in the sector. We also decided not to get external funding because then we’d be building the business for the next round of funding instead of the way we wanted to build it.

Launching our first programme was an interesting challenge and experience. First, we needed to market online education, which is not seen as a serious learning venue. People think of it as watching a few YouTube videos and reading some course content and not much else. But here, rather than taking a bookshelf and converting it for the online medium, we wanted to create differentiated content and an experience that would make our students value the experience. But while we did that, we also wanted to get off the ground relatively quickly.

So this was where we did the second counterintuitive thing [the first was to opt for online education rather than schools]: We launched a course on entrepreneurship. Now, you might ask, ‘Why does entrepreneurship need to be taught?’ But I believed that given my experiences as an entrepreneur, there are certain lessons that could be explained to students.

Marketing an unknown company was a challenge. We did a lot of offline work by working with publications like YourStory in the entrepreneurship space. We went to events at IIT-Delhi and IIT-Bombay where I held panel discussions with entrepreneurs I know. We were pleasantly surprised by the response we received. Our first cohort had 150 students paying Rs 50,000 each. And 600 students are now in the next cohort.

Mayank and his team worked with a bunch of entrepreneurs like Deep Kalra (MakeMyTrip), VSS Mani (Justdial) and Phanindra Sama (founder, redBus) to create a set of videos that would showcase their experience in setting up their businesses and their key takeaways. For instance, they would learn that taking ownership for your decisions both right and wrong is crucial, and that every entrepreneur needs to pivot the business when the situation demands, and so on. Throughout the programme, there would be faculty members anchoring it, along with assignments and study sessions. I would like to believe that the students had an enriching experience, otherwise it is difficult to see how our next cohort would have so many more students.

Working on our first course helped us understand our audience (18- to 30-year-olds) and it was here that we realised that we need to work a little more closely with companies when we launch our “career-oriented” courses. The issue is that human resource managers have never learnt anything online and so for our students to make that career transition on the basis of an online degree either within or outside the organisation is hard.

We’ve now tied up with companies like Uber, Genpact, and Cognizant and plan to expand further. We have also integrated a career-planning cell in each of the programmes, which helps our students transition either during the course or after. We’ve also taken up office space in Bengaluru and branded it UpGrad Exchange where people can come to meet, listen to entrepreneurs, network, etc, while still ensuring that all the learning is done online. For now, our tie-ups with companies do not include a package for them where they can send a certain number of employees to our programmes. In addition to the entrepreneurship programme, we now have a programme in digital marketing, product management, and data analytics [offered in partnership with the Indian Institute of Information Technology (IIIT) in Bengaluru]. These are priced between Rs 50,000 and Rs 2 lakh and we have a total of 2,000 students with a 90 percent completion rate. Our tie-up with IIIT-Bengaluru is unique and we were delighted that 300 students paid Rs 2 lakh for an 11-month programme in data analytics. We now have 500 students on the waitlist.

In 2017, we plan to have a total of 16 programmes with 10,000 students enrolled paying an average of Rs 1 lakh each. For now, our customer acquisition costs are 30-35 percent of the fees, but we plan to bring that down to 20 percent once our scale increases. I foresee about 20 percent of our content being refreshed every year. So every four to five years, the entire course changes. We need to do this to remain relevant as the areas we cater to are themselves going through a lot of change. The one thing that Mayank would have done differently is that he’d have tied-up with universities like IIIT-Bengaluru much more aggressively, because for some programmes, students are still looking for an endorsement stamp from a university.

We recently did a four-week slice of our entrepreneurship course pro bono with Startup India to give people a flavour of what they can learn through online education. Somehow, as Mayank says, we, as a culture, have a rigid mindset that says once we start working, we don’t need to learn anymore. We don’t celebrate learning enough.

Going forward, we believe that we’ve hardly scratched the global opportunity for online education. We plan to look at Southeast Asia and the Middle East initially, where our programmes would be relevant after some tweaks. The allure of these markets is that we can price them much higher. So say a Rs 1 lakh course can be sold for $8,000 to $10,000; this significantly increases our margins. This expansion is at least two years away, once our brand in India is more established.