Fewer than six percent pilots at the world's leading airlines are women, while just eight of the largest 100 carriers in terms of passengers have had women bosses, according to a 2021 study by the Aviation Institute at the University of Nebraska 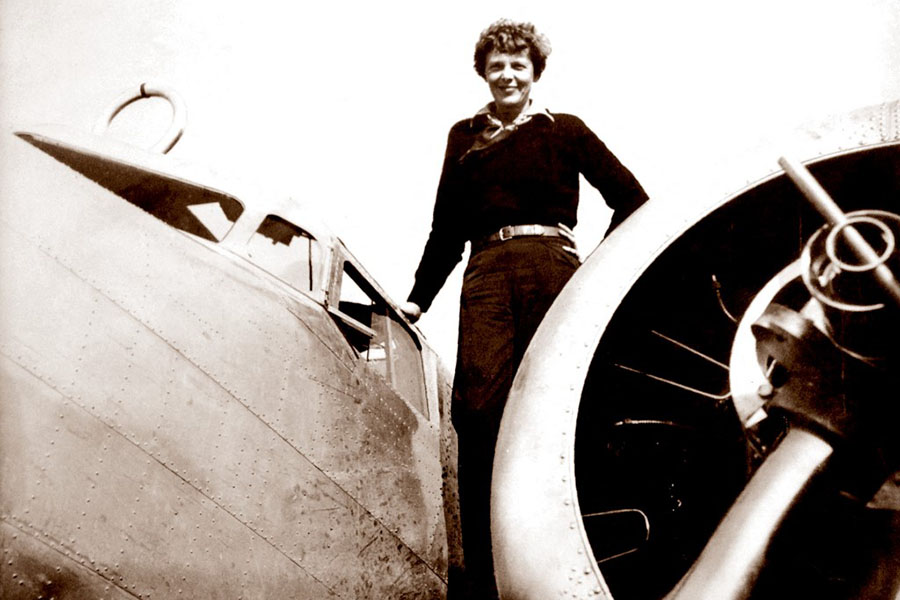 A May 20, 1937 photo shows US aviator Amelia Earhart on the wing of her Lockheed 10 Electra in Burbank, California. Image: Albert Bresnik / The Paragon Agency / AFP

Farnborough, United Kingdom: Rebecca Lutte regularly takes to the skies behind the controls of her RV-10 kit plane.
Lutte, who is often joined in the air by her husband in the passenger seat, says that on several occasions air traffic controllers asked if her spouse was there in case of problems.
"It's not often. But it just shows that there's still more work to be done," says Lutte with a smile.

While some women have overcome such prejudice and made inroads into the sector in recent years, aeronautical careers remain largely the preserve of men — especially at the top.
According to a 2021 study by Lutte, an associate professor at the Aviation Institute, University of Nebraska at Omaha, fewer than six percent of pilots at the world's leading airlines are women.
Read more: How 4 women pilots steered Air India's longest flight and maiden route over North Pole
Just eight of the largest 100 carriers in the world in terms of passengers carried have female bosses.
Those that do include Air France, under the baton of Anne Rigail, Aer Lingus' Lynne Embleton and since July 1 KLM's Marjan Rintel.
"Aviation is a system that was originally designed by men and for men," says Lutte.
"Over the years, women have gained in numbers, but they've really had to fit into a system that wasn't designed for them."

Barriers faced by aspiring female aviators include uniforms designed for men and scant representation of women in training manuals.
As in other sectors, sexism and aggressive sexual behaviour are pervasive.
In a 2018 study by Women in Aviation International, 71 percent of women survey said they had suffered some form of workplace harassment.
Several women have nonetheless made their mark on aviation.
Read more: LinkedIn to pay $1.8 million to women over discrimination claims
They include US flyer Amelia Earhart, the first woman to cross the Atlantic by plane under her own steam.
France's Raymonde de Laroche became the first woman in the world to obtain a pilot's licence when she received hers in 1910.
During the 20th Century several female aviators fought for their countries — notably the paramilitary Women Airforce Service Pilots programme which supported the US air force during World war II.
Read more: Salary Negotiations: A catch-22 for women
More recently, some airlines have made reducing inequality in the industry a priority.
US carrier United committed to ensuring that by 2030 at least half of the 5,000 pilots the carrier intends to train by then will be women and minorities.

Some airlines, such as Air India, are further down the path to equality with women making up some 13 percent of its pilots, according to the International Society of Women Airline Pilots.
Canada's CAE simulation technologies and training group offers women training grants and signed a partnership agreement with no-frills European airline easyJet at the Farnborough air show this week.
The British carrier expects to take on one of the European women participating in the programme.
Equality will take time, but there are reasons for optimism says Sandra Bour Schaeffer, CEO of Airbus UpNext, part of the European plane-maker which develops and tests disruptive future aviation technologies.
Read more: India's first woman airline CEO has ambitious goals. Can she take off?
The Franco-German engineer, who has some 20 years' experience in the industry, says the key is to bring young talent onboard and emphasise training.
"First of all one must not limit the girls in their choice but open perspectives to them, showing them there are many things which can equally be done by women as men," she says.
Bour Schaeffer says it is important to have female role models who have already succeeded — though it remains a turbulent journey.
By Daniel Hoffman

Tweets by @forbesindia
Adaptive authenticity: A mighty tool for prosperity and sustainable growth
Japan's baby hatch: Abandonment or a new lease of life?