CEO Parag Agrawal addressed the whistleblower complaint made by Peiter Zatko, saying "This complaint that was filed yesterday is foundationally, technically and historically inaccurate"

By Ryan Mac and Kate Conger 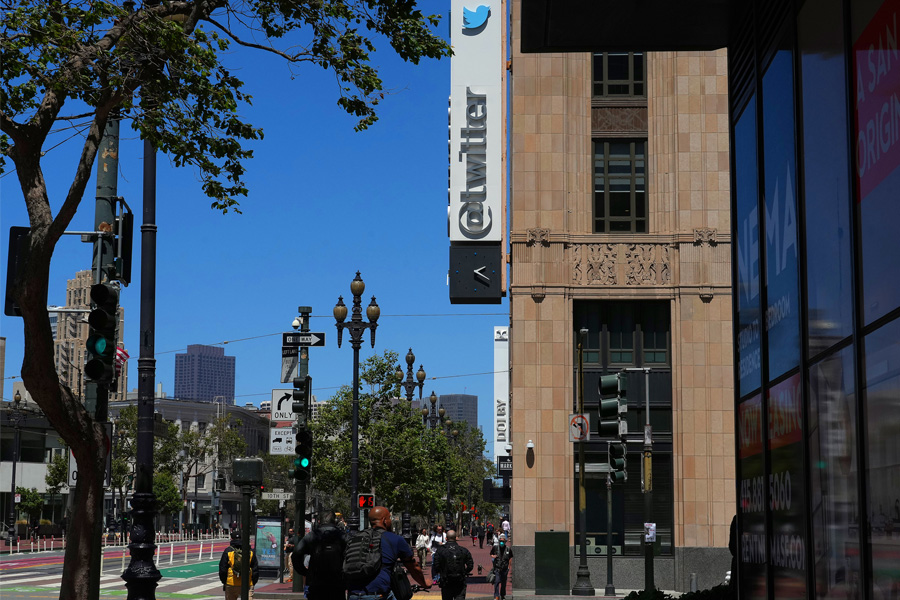 Outside Twitter’s headquarters in San Francisco, July 18, 2022. Executives at Twitter pushed back on Wednesday, Aug. 24, against what they said was a “false” narrative being created around a former executive’s allegations about the company’s security practices. (Jim Wilson/The New York Times)

Executives at Twitter pushed back Wednesday against what they said was a “false” narrative being created around a former executive’s allegations about the company’s security practices.

At its weekly companywide meeting, Twitter CEO Parag Agrawal addressed a whistleblower complaint made by Peiter Zatko, the former head of security, who was fired in January. Zatko’s complaint, in which he accused Twitter of lying about its security practices and violating a 2011 agreement with the Federal Trade Commission, was made public Tuesday.

“This complaint that was filed yesterday is foundationally, technically and historically inaccurate,” Agrawal told employees at the meeting, which The New York Times listened to. “There are accusations in there without any evidence and many points made without important context.”

Other executives — including Sean Edgett, the general counsel — echoed Agrawal. Privacy and security executives Damien Kieran and Lea Kissner spoke about improvements the company had made to its security.

“We have never made a material misrepresentation to a regulator, to our board, to all of you,” Edgett said. “We are in full compliance with our FTC consent decree.” He added that an external auditor reviews Twitter’s compliance with the decree every two years.

Kieran also disputed Zatko’s claims that Twitter’s infrastructure lacked security, saying the company required employees to install security updates on their laptops and use physical authentication keys and locked down access to internal systems after a 2020 hack.

“Peiter Mudge Zatko stands by every statement in the disclosure statements and looks forward to meeting with regulators to discuss his allegations,” said Debra Katz, a lawyer for Zatko. “Twitter’s efforts to smear him are pathetic and ultimately will be unavailing.”

Zatko is scheduled to testify about his disclosures Sept. 13 before the Senate Judiciary Committee.

At the meeting, Dalana Brand, Twitter’s chief people and diversity officer, also discussed the company’s elevated attrition rate for the year of about 18.3%. She attributed it to “internal challenges” and the macroeconomic environment. Twitter employed more than 7,500 full-time workers at the end of 2021.

A Twitter spokesperson said employee attrition was happening across the tech industry, driven in part by the global macroeconomic climate, but that the company remained focused on its business and supporting its workforce.

Zatko’s claims are set to be swept into Twitter’s lawsuit against Elon Musk, who agreed in April to acquire the social media company for $44 billion but has since attempted to abandon the deal. Twitter is suing the billionaire in Delaware Chancery Court to force him to complete the acquisition.

Musk’s legal team has seized on Zatko’s complaint as evidence that Twitter has been misleading people about the number of spam accounts on its platform. Musk has cited a lack of disclosure about spam accounts as a reason to terminate the deal.

In a hearing Wednesday, lawyers for Musk mentioned Zatko’s complaint and asked a judge to require Twitter to hand over more information about its bots and spam. Twitter’s lawyers said the company had already provided all the data required to test its bot tally and argued that Musk’s requests for additional data were not relevant to the case.

“There’s a whistleblower complaint that has now been filed publicly that talks about the false information provided,” said Alex Spiro, a lawyer for Musk. “He was one of the top handful of executives in the company.”

The judge said she would consider the matter and issue a ruling later.