From 1966 to 2019, 77% of mass shooters obtained the weapons they used in their crimes through legal purchases 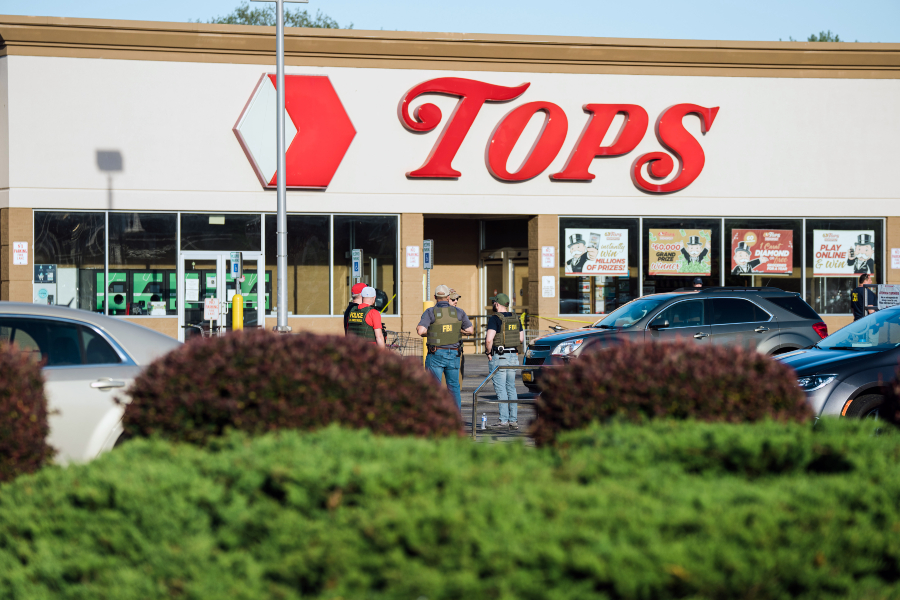 Police and FBI investigators at the scene of Saturday’s mass shooting at the Tops Friendly Market supermarket in Buffalo, N.Y., May 16, 2022. From 1966 to 2019, 77% of mass shooters obtained the weapons they used in their crimes through legal purchases. Image: Gabriela Bhaskar/The New York Times

WASHINGTON — Of all the wrenching similarities between the massacres at Marjory Stoneman Douglas High School in Parkland, Florida, the Tree of Life synagogue in Pittsburgh, the Walmart in El Paso, Texas, and the Tops supermarket in Buffalo, New York, one stands out most starkly: Each gun used was purchased legally.From 1966 to 2019, 77% of mass shooters obtained the weapons they used in their crimes through legal purchases, according to a comprehensive survey of law enforcement data, academic papers and news accounts compiled by the National Institute of Justice, the research wing of the Justice Department.
In upstate New York a few months ago, the 18-year-old suspect in the Buffalo shooting walked into Vintage Firearms in sleepy Endicott, passed an instant background check without a glitch and bought a used Bushmaster XM-15 semi-automatic rifle, a copy of the ubiquitous AR-15 used in many other mass shootings.

The suspect, Payton Gendron, had recently been required to undergo psychological evaluation after making menacing, violent comments to high school classmates, but the episode was not enough to set off the state’s red flag law, which bars the mentally ill from buying weapons.
Then he went home, borrowed his father’s electric drill, and removed a restraining bolt, required by state law, that limited its capacity to a 10-round clip. That modification allowed him to load multiple 30-round magazines, making it easier for him to hunt, target and kill Black people, according to a manifesto he posted online.
While mass shootings, defined by many experts as episodes involving four or more fatalities, represent a relatively small percentage of overall gun crimes, they have risen drastically in recent years, with at least eight of the 20 deadliest mass shootings in U.S. history taking place since 2014.
That a majority of these criminals have made their gateway purchases though legal means reflects the profound inadequacy of local, state and federal statutes to detect or deter mass shooters, say law enforcement officials, researchers and the families of people they killed.
“The reality in this country right now, is that anyone who wants to cause harm to themselves, or do someone else harm, can easily acquire the means to do so — legally,” said Fred Guttenberg, whose 14-year-old daughter, Jaime, was killed in the school shooting in Parkland in 2018.
“Based on what we know about Buffalo, the system seems to have been followed, but the problem is with the system itself,” he added. “The reality of life in America, the big problem, is that these people don’t have to jump through enough hurdles to get a gun.”
The Biden administration renewed its calls to ban semi-automatic weapons and expand national background checks in the wake of the attack in Buffalo on Saturday, as it has done time and again after mass shootings. While White House officials have taken some executive actions — such as nominating a permanent director to lead the Bureau of Alcohol, Tobacco, Firearms and Explosives — their legislative efforts have little chance of success.
At the state level, hopes for new gun control measures are even bleaker.
One by one, Republican-controlled state legislatures have enacted laws to undo existing gun regulations that place restrictions on the purchase and carrying of firearms, while some states, like Missouri, are challenging the federal government’s right to impose any regulation on firearms.
The biggest threat to gun control looms just over the horizon: Over the next month or two, the Supreme Court is expected to strike down all or part of a New York law that curtails the concealed possession of a gun without a special permit, a case seen as a potential landmark decision that could invalidate dozens of similar laws in liberal-leaning states.
“The infuriating part is that we seem to be going backward,” said James Densley, a co-founder of the Violence Project, a nonpartisan research center that compiled the data used in the National Institute of Justice report.
The 19-year-old attacker who killed Jaime Guttenberg and 16 others in Parkland bought his Smith & Wesson M&P15, another AR-15 clone, from a licensed dealer after passing an instant background check, even though school officials warned local law enforcement he had made violent, racist threats.
The 21-year-old man who murdered more than 20 people at a Walmart in El Paso in 2019 targeted Latinos and espoused many of the same racist theories as Gendron. He ordered his AK-47 clone online, from Romania, and later picked up the gun and ammunition at a Dallas-area gun shop after passing the requisite background checks.
The antisemitic extremist who killed 11 Jews at the Tree of Life synagogue in 2018 also legally bought the weapon he used.
T. Christian Heyne, the vice president of the gun control group Brady, said the only way to stop mass killings was to enact strengthened universal federal background checks, to compensate for the wide variation in state and local laws. But that proposal has stalled in the Senate despite enjoying overwhelming public support.
“Without a federal baseline, we can’t achieve anything,” he said. “We have just had a report showing gun violence is at historic levels, and now this happens. What are we going to do about it as a country? Are we really this desensitized?”
Robert Donald, the owner of the store in Endicott who sold Gendron his gun, was stunned when federal law enforcement officials contacted him about the purchase.
He said nothing about the young man raised any suspicions; in fact, he hardly remembered him at all. But he told The New York Times on Sunday that “any gun can be easily modified if you really want to do it,” when asked about the illegal modifications Gendron made to the Bushmaster.
For his part, Gendron boasted of his handiwork, complete with painstakingly composed how-to pictures, in his online manifesto.
The document is 180 pages. About half of it is a racial screed. About half of it is devoted to a matter-of-fact discussion of the ideal gear — guns, ammunition, pistol grips, body armor, helmets — to buy, online or at flea markets, when planning a mass shooting.