There can be no guarantee that a new, saner financial order will rise out of the ruins of the old, but there is a growing sense that the world is more open to such concepts as financial responsibility, accountability, fairness, stakeholder return and sustainability. There also is an uneasy sense that the financial credit crunch prefigures a much more profound ecological credit crunch, driven by demographic pressures, natural resource overload and climate change.

All of these challenges were on the agenda at this year’s Skoll World Forum on Social Entrepreneurship, which took place at the Saïd Business School. 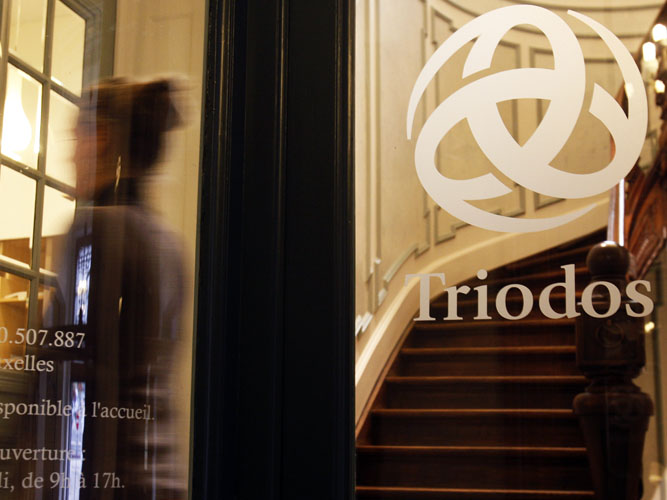 Image: Thierry Roge / Reuters
Triodos Bank, provides banking services to social enterprises, investing capital through its Opportunity Fund
During the event, Volans launched its new report The Phoenix Economy: 50 Pioneers in the Business of Social Innovation. Funded by the Skoll Foundation, our first market intelligence report explores how entrepreneurs, investors and businesses are adapting their business models as the downturn evolves.
But where does the phoenix fit in? This mythical bird symbolises longevity, with a life expectancy of at least 500 years. At the end of its life cycle, so the myth goes, it is consumed by flames, with a new bird rising from the ashes. By extension, the emergent phoenix economy symbolises our hope that, while it is unlikely we will see an easy return to prior economic conditions in the next decade, we will likely see huge, ultimately positive transformational change. It symbolises the convergence of social, economic and environmental innovation and enterprise.
We foresee continuing tensions between bull and bear psychology in markets, focusing on a single financial bottom line – but increasingly overlain by new tensions between “dragon” and “phoenix” mindsets. Dragon economies (think China) often adopt a double bottom line strategy, mainly focusing on economic growth, but also keeping an eye on social cohesion. Dragon economies will be energetic, aggressive and inclined to economic nationalism. The phoenix mindset, by contrast, blurs across national boundaries, prioritising economic, social and environmental justice.
Alongside the financial world, governments must play a key role in creating the pre-conditions for the rise of phoenix industries and initiatives. In this spirit, Volans recently hosted a delegation of senior policy-makers and grant-makers from Canada, visiting the UK to better understand the landscape of social innovation. A key element of this tour involved mapping out the various investors and financial intermediaries who recognise that new models of finance are required – and are driving a growing number of interesting experiments in the public, private and citizen sectors.
The delegation met with some incredible examples of the emerging social finance sector. They included: Bridges Ventures, a social venture capital company investing in enterprises which focusing on environmental or social impacts; Catalyst Fund Management, investing in social business areas of renewable energy and the environment, health, education, and "ethical consumerism"; Social Finance Ltd., which is developing financial products that marry the needs of investors and the third sector; Venturesome, an initiative of the Charity Aid Foundation which advices and provides capital investment to charities and other social purpose organisations; and Triodos Bank, which provides banking services to social enterprises, investing capital through its Opportunity Fund. Each of these organisations has a unique value proposition, but they all share a desire to see the tools and skills of finance applied in growing social enterprises.
Future funding sources
Interestingly, when we polled social and environmental entrepreneurs for The Phoenix Economy, asking them where they saw sources of funding in the future, nearly one third recognised the role that various forms of venture capital, supplied by funds such as those listed above, might play in helping them grow their enterprise. But their minds turned more readily to softer forms of funding. Over time, as funding from foundations and from governments is squeezed, we expect to see entrepreneurs exploring new forms of investment, which hopefully will result in a higher quantity of quality deals in this investment class.

In The Phoenix Economy, we present an action agenda for social innovation, based on a Manifesto for political leaders, a Prospectus for business leaders and a Syllabus for business educators. We also identify a “Phoenix 50” of powerful changemakers, with the help of over 100 social and environmental entrepreneurs worldwide. Here are some of the leaders – and three related trends:
Time to change the rules
The most-nominated changemaker was the Obama Presidency, the spotlight being on the hugely ambitious targets in its New Energy for America plan, with the State of California also making the final 50 – despite its current financial problems – because of its role as an incubator of clean or green technology. Another Phoenix 50 leader, Van Jones of Green for All, has been recruited into the White House to boost the “green collar jobs” side of the bail-out packages.
New players
New investors and financial models are going mainstream, having emerged in the corporate responsibility and sustainability realms, among them Climate Change Capital, Al Gore and David Blood’s Generation Investment Management and Sustainable Asset Management, which co-evolved the Dow Jones Sustainability Indexes. Such organisations play key roles in investing in business models generating double and triple bottom line forms of value—but they need critical mass to achieve systemic change.
Transforming finance is a team sport
Ultimately, innovation will be needed at every level of the financial system. Among the Phoenix 50 are: Aflatoun, providing child financial education in a growing number of countries; Ceres, which recently convened 35 investors with over $3 trillion in assets to lobby congressional leaders to pass strong legislation to spur a clean energy, low-carbon economy; venture capitalists Kleiner Perkins Caufield & Byers, who have piled into what they call green technology; and the Global Impact Investing Network, under development by a range of leading financial institutions. Initiatives like these give us real hope that capitalism can be reinvented to meet the needs of the twenty-first century.
John Elkington is co-founder of Volans and SustainAbility and Charmian Love is Chief Operating Officer of Volans. Their publication, The Phoenix Economy: 50 Pioneers in the Business of Social Innovation,
is available from their website at www.volans.com

Tweets by @forbes_india
"I have always been supportive of a more intensive and intrusive supervisory approach"
Europe, The Great Spectator