Cointreau's spice route: A European drink with a desi twist 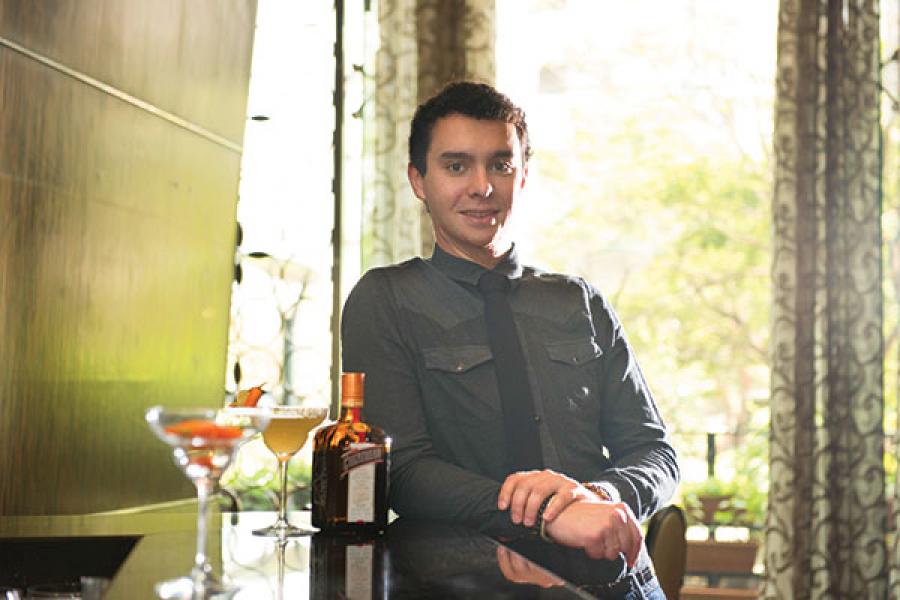 If  you’re Alfred Cointreau, 11 am on a Friday is as good a time as any to serve up a cocktail. He sets up his workstation at Le Bar Diamantaire in Sofitel Mumbai BKC hotel with the alacrity of a person who has been doing this for years. And he has. His grandmother trained him in the craft: When your name is Cointreau, it makes sense that your grandmother teaches you the secrets behind a splendid cocktail. After all, liqueur is the family’s mainstay.

In 1849, his great-great-great-grandfather Edouard-Jean Cointreau started a distillery in Angers, France. Today, Alfred, 28, is trying to secure the future of his family’s liqueur in emerging markets in Asia. That is why he’s in Mumbai, visiting pubs and showing bartenders how to prepare Cointreau-based cocktails.

As the sixth generation scion of the French family, he is aware of his responsibility. “I am the only family member of my generation (working) at Rémy Cointreau,” says Alfred, who is heritage manager for the Cointreau brand. On November 11, 1989, two days after the fall of the Berlin Wall, his grandfather decided to merge his business with the French cognac company, Rémy Martin & Cie SA. And by 1991, Rémy Cointreau was established. It is a publicly listed company with nine brands of cognac, liqueur and spirits in its portfolio.

Though it is steeped in a European tradition, the liqueur’s largest market is in the US, and its future may well be determined by how Asians take to it. While it started strongly in China, its recent performance has been stodgy. This could be due to the corruption crackdown there which resulted in officials and companies becoming wary of gifting expensive bottles of alcohol and liqueur, and of any display of wealth.

India, too, is a key growth area for the liqueur. Alfred acknowledges that while Cointreau is a familiar brand for many Indians, it is still not asked for by name. “Indians are just about getting familiar with asking for Cointreau by name,” he says. Its acceptance has improved since his last visit to the country in 2014  and he is here to better it.

But to familiarise people with the taste of the liqueur, Alfred has to understand his consumers. And no place affords a better viewing seat than a bar. Inevitably, his nights are late and spent in pubs and bars. “This helps me get a clear idea of the taste profile of patrons,” he says. In Dubai, for instance, people like their drinks “tangy”. In India, spicy cocktails are quite popular. It seems that the most asked-for cocktail in India is the Mojito, a white rum-based cocktail with sugar, lime juice, sparkling water and mint. “As of now, the trade (bartenders) is most comfortable suggesting Mojitos and that is something we have to change,” says Anand Virmani, marketing manager at Rémy Cointreau-India subcontinent.

Alfred is confident that he will be able to strengthen Cointreau’s presence in India, as he leaves behind a signature cocktail at each bar he visits. ForbesLife India met him at the Le Bar Diamantaire, where he is serving up a spicy margarita, and asking the bartender for some rock salt. The Margarita Mumbai Spice, which is what he has named this signature drink, is an idea he came up with after noticing that Indians like that extra zing in their drinks.

According to Alfred, the classic margarita was created with Cointreau by Dallas-based socialite Margarita Sames in Acapulco, Mexico, in 1948. For the Indian version, he layers the mouth of the glass with rock salt. He wants to pair the Cointreau with tequila, the advantage being that the distilled Mexican beverage leaves behind a bite that’s enhanced by the liqueur’s citrus flavour. Alfred pours 40 ml of Cointreau, 50 ml of tequila and 30 ml of lime juice into a shaker, and gives it an energetic mix for half-a-minute. 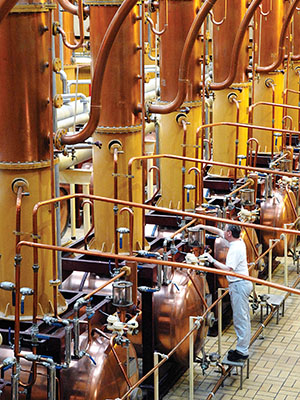 Image: Getty Images
Rich history: Cointreau’s distillery in Angers, France, was established in 1849. Later in 1875, the company began selling orange-flavoured liqueur in dark orange bottles; they are its signature bottles even today

“I’ve had some of the spiciest Bloody Marys in the country,” he says as he takes a sip of the cocktail. He’s still not satisfied. “The zing…” he muses. And almost on cue, he asks the bartender to get him some red peppers. He removes the seeds, slices the peppers and adds them to the drink. He picks up a straw, and tastes it again. This time, Alfred is satisfied. “The classic margarita is my favourite cocktail, but the Margarita Mumbai Spice is probably my new favourite. The advantage of Cointreau is that there is so much you can pair it with. I always put a local flavour with each drink as it helps it gain acceptance.”

The liqueur’s distinct orange flavour, derived from sweet and bitter orange peels, blends harmoniously with most spirits. But it turns out, Alfred’s ancestors discovered the citrus fruit in what can only be called a fortuitous accident. When they started their distillery, more than a century ago, Edouard-Jean and his brother Adolphe experimented with a cherry liqueur, and while they had a small successful business, sales were largely restricted to the provinces around the distillery. They got their first big opportunity when they exported some oranges from Spain. Citrus fruits grown in warm, dry climates were largely absent from France at the time. It was Edouard-Jean’s son (and Alfred’s great-great grandfather) Edouard who perfected the recipe of Cointreau in 1875, after ten years of research.

Edouard blended sweet and bitter orange peels and pure alcohol from sugar beets, and the Cointreau we know today was created. (The recipe, needless to say, is a family secret. ) Edouard began selling the liqueur in dark orange bottles in 1875. It still remains the signature bottle.

Today, Cointreau is distilled in Saint-Barthélemy-d’Anjou, France, with orange sourced from around South America, Africa and the warmer Mediterranean parts of Europe. While Rémy Cointreau does not break out numbers by brand, experts estimate that 13 million bottles are distilled every year. Every employee in the firm must complete a stint at the distillery in France. Alfred too spent his first three years in the company learning the trade. 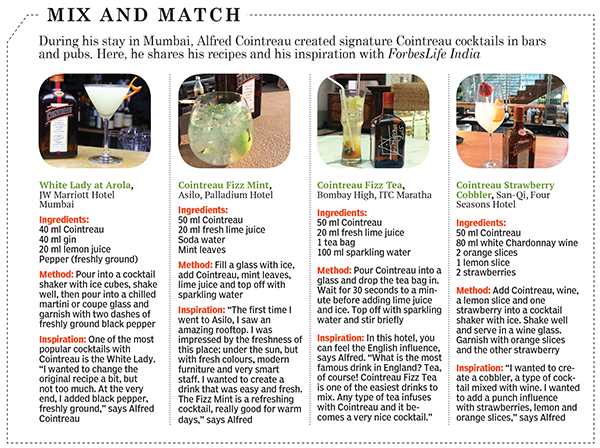 As heritage manager, his main task is to help popularise the liqueur. The foreign liqueur market in India is estimated at only Rs 400 crore, and Cointreau is a late entrant. It came to India in 2009 when Rémy Cointreau, which owns the brand globally, tied up with Sula Vineyards to market and distribute the liqueur. The advantage is that Cointreau is not going head-to-head with any other liqueur company. “There isn’t any one brand that we have to compete with; we just have to create our own market,” says Virmani.

The company is using below-the-line marketing efforts like Alfred’s tour of pubs to make up for lost time. “We are working to make bartenders more comfortable with the idea of suggesting Cointreau. Unless they suggest it, people are not going to order it,” says Virmani. But he acknowledges that Mumbai has an up-and-coming cocktail culture. “Other markets such as Chennai have been more difficult to crack,” he says. Another deterrent is the price and the 155 percent tax on imported brands, because of which a 750 ml, 25-euro bottle of Cointreau costs more than double in India. (It retails at an average of Rs 3,000, though the price varies from state to state.)

That Friday night, bartenders at Le Bar Diamantaire started recommending the Margarita Mumbai Spice which they learnt to make under Alfred’s tutelage. We are told that it was well received. The rock salt blends well with the tequila. The Cointreau rounds off the taste with that deep liqueur buzz. And the spice kicks in when you least expect it. Alfred’s job, at least for the moment, is done.

Tweets by @forbesindia
Capital spending, investments to improve, but after a year
Authors give legends a contemporary twist