Why more sales will not mean more hiring in IT. Hint: It’s not because of a non-linear business model 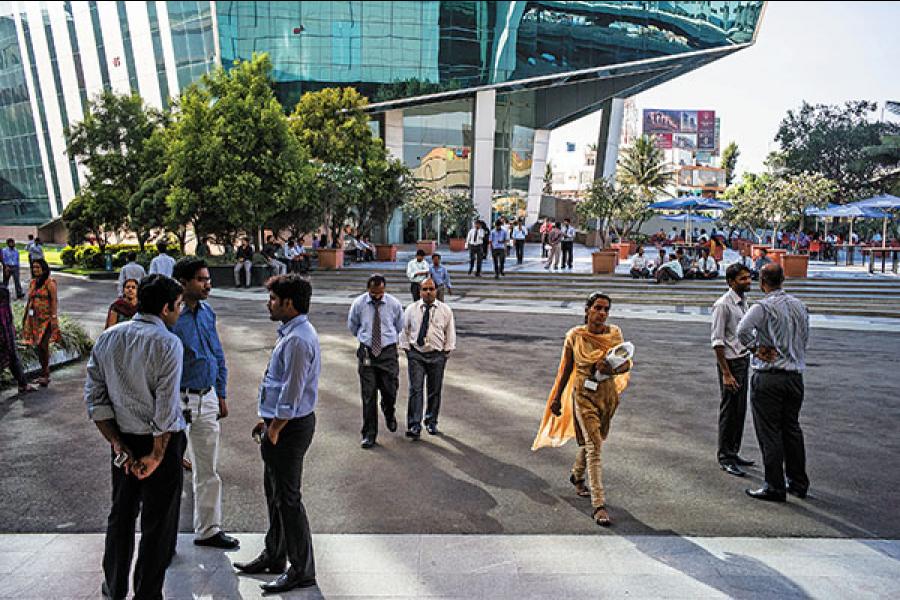 In 2001, after the dotcom bubble burst, the Indian IT industry faced one of its biggest crises. Clients turned tight-fisted. Orders were hard to come by. Sales suffered. Rumours of layoffs hung heavy above the heads of techies. And hiring came to a halt. Soon, growth returned. The impact of the hiring freeze showed up as shortage of talent and companies were soon scrambling for good hands. The episode taught managers a big lesson: When you are riding a wave as big as outsourcing, have faith, don’t stop hiring.

That’s a lesson they are trying hard to unlearn.

For long, in the Indian IT services sector, business growth and hiring followed each other like night follows day. In fact, its business model rested on this fact: More business meant more code, and India offered not only cost advantage, but also ensured there will be a constant stream of people to cater to the demand. It went by the term linear business model, and it seemed to have worked well for the industry so far.

In the coming year, that synchronised play of supply and demand is likely to break down. In other words, while the industry is expected to grow 12 to 14 percent, IT companies will not increase their headcount by as much. It’s not because the Indian IT industry found a way to get more revenue with less. They are all working on it, and there are even early hints that they are finding some success in such growth. But the reason for the lack of appetite for headcount is a metric called utilisation: The percentage of employees who are assigned to a project and are billed.

That number is pretty low for Indian IT companies right now. Consider the top three. TCS has a utilisation rate (excluding trainees) of 81.7 percent, Cognizant 74 percent and Infosys 73.2 percent. Since all these companies are big employers, absolute numbers turn out to be huge—an average of 43,500 employees are not billed in each.

For the industry as a whole, even assuming an 80 percent utilisation rate (and average revenue per employee of $36,000), the 5.5 lakh unbilled employees can absorb additional revenues of $20 billion—a fifth of the total size of the sector.

Now, IT companies don’t run to full capacity. They need some people on the bench who can be quickly deployed into upcoming projects. Infosys, for example, says it’s most comfortable with a utilisation rate of high 70s. But with the rate of utilisation running low—and growing pressure on pricing—it is the lever that companies are pulling.

A Wipro spokesperson said for every percentage point improvement in utilisation rate, the operating margins go up by 30 to 40 basis points, or 0.3 to 0.4 percent. For Infosys, the impact is in the range of 40 to 45 basis points (0.4 to 0.45 percent), its spokesperson said.

The message is clear: While the revenues might grow at 14 percent, the hiring won’t.

However, this will not hit all segments equally. Indian IT services companies will increase their hiring abroad. “We visit around 25 institutes in the US for recruitment. We have also started hiring from campuses in continental Europe. Our campus hiring approach is in keeping with our philosophy to globalise our talent footprint for clients increasingly looking to leverage a global delivery model,” says  R Chandrasekaran, group chief executive, technology and operations, Cognizant. Last year, its rivals, TCS and Infosys, said they have increased their hiring in the US.

Within India, experienced hands are in demand. At least four Bangalore-based recruitment firms, which are involved in lateral hiring, said the demand for experienced candidates continue to be robust. “It is expected that the IT industry will grow by 12 to 14 percent and the nature of demand from clients has changed,” says E Balaji, CEO of Randstad.

There’s a huge demand for engineers specialising in emerging technologies such as cloud, mobility and analytics. In fact, there’s a huge shortage of big data skills, says Venu Reddy, research director at the International Data Corporation.

The worst affected will be the freshers. Last year, when Infosys said it would delay the on-boarding of freshers for whom it had already made offers, it made huge headlines. Some might consider them lucky, because a good number of subsequent batches might not get placed at all.

“The biggest impact will be on the Tier 2 colleges, as IT and ITES companies are the main recruiters. With the current global economic situation, the IT majors are in a wait-and-watch mode when it comes to hiring and on-boarding,” says Randstad’s Balaji.