You can't take cricket out of me: N Srinivasan

The former BCCI president on CSK's two-year ban in IPL, perception of him being authoritarian and his chances of making a comeback 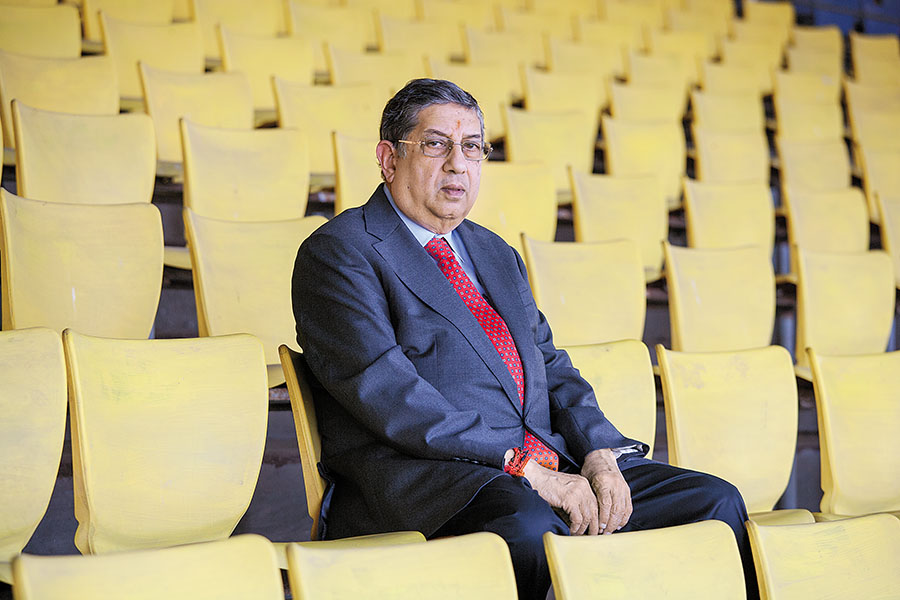 In April 1979, N Srinivasan was abruptly removed from the board of India Cements, a company co-founded by his father TS Narayanaswami and his friend Sankaralinga Iyer.

For the next 10 years, reckons Kalyani Candade in her coffee table book, Defying The Paradigm, Srinivasan, vice chairman and managing director of India Cements, fought silently and persistently from the outside. “Even when I was told that I would never enter India Cements again,” Srinivasan recounts in the book, “I was neither disheartened, nor dismayed not frightened.” He eventually staged a comeback in 1989.

Srinivasan, now 74, faced similar ignominy in the four decades since that incident. He was ousted as Board of Control for Cricket in India (BCCI) president in March 2014, following a probe into the Indian Premier League (IPL) spot-fixing scandal in which Gurunath Meiyappan, his son-in-law and former Chennai Super Kings (CSK) team principal, was found guilty of betting. The following year, Srinivasan was removed as ICC chairman. Though the Supreme Court-appointed Mudgal Committee, tasked with looking into various aspects of the functioning of the BCCI, cleared him of match-fixing allegations, the CSK owner was not reinstated as BCCI president due to the 70-year age cap recommended by the Lodha panel.

What has not changed is Srinivasan’s defiance. “It’s (age cap) not fair because in so many walks of life there is no restriction. Then why only for cricket administrators,” quips Srinivasan, who rolled out state T20 championship—Tamil Nadu Premier League (TNPL)—after CSK was banned for two years in 2015. “You can take me out of cricket, but you can’t take cricket out of me,” he adds.

Tell Srinivasan, who heads the Tamil Nadu Cricket Association, that there is a bleak chance of him staging a comeback to the BCCI, and he flashes a broad grin. “Que Será, Será (Whatever will be, will be),” he says, using words from his favourite song. “I never gave up, and I will never give up.”

As defending IPL champions CSK get ready to retain their trophy, which they won in 2018 after a two-year-ban, Forbes India spoke to Srinivasan. Edited excerpts:

Q. On state associations rallying around him to resolve the BCCI crisis
In January, BCCI members met informally in Mumbai and they were unanimous in their opinion that the Committee of Administrators (CoA) has not helped Indian cricket. People lamented about what has happened to the BCCI. It’s not that the BCCI did anything gravely wrong. There might be different perceptions, but this is a body which was founded over 75 years ago, and for most of the time, Australia and England had a veto. People don’t talk about it. In the early years, it was difficult to get any overseas team to visit India or to guarantee any returns. Everything changed in the last few decades. India is now on top; 80 percent of world cricket is financed out of India. Indian business, entrepreneurs… it’s Indian money when it comes to media rights and everything. That has to be recognised. It was felt that during the COA regime, this got diluted considerably. There is advantage in unity. People were together in their assessment of what has happened and possibly on the way forward.

Q. On CoA putting the BCCI house in order
First of all, there was no problem in the house. State associations form the bedrock of Indian cricket… they run tournaments, give opportunities to youngsters… there is a system in place. All associations, who form the assembly line of cricketers, are honorary. None of them is paid. They all do what they do for the love of the game. So I don’t understand what was wrong with state associations. The CoA people were not put there for their cricket competence. There was a perception issue. They thought everything was rotten. If you look at the quality of Indian cricket, it has vastly improved over time, and IPL has made a great difference.

Q. On the perception that he presided over an ‘authoritarian’ regime
BCCI, as an organisation, is president-centric. There have been presidents before me and there will be after me. All of them attended ICC meetings, but who fought for India? Who said India is delivering so much, so why can’t I take a small portion? Who stood up to the mighty in the ICC? If you believe in what you are doing and not worried about what X or Y will say, you can be bold. I was straightforward. I was not authoritarian. I was a decision maker. But that doesn’t make me an authoritarian. I always worked with people, discussed, consulted and finally took a decision. But if people still believe me to be an authoritarian, I take it as a compliment. 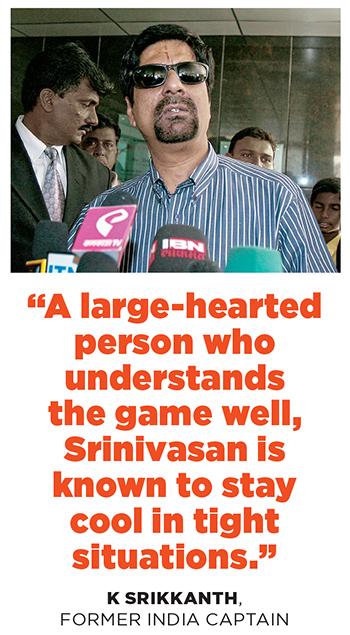 Q. On India Cements and its association with cricket
In the ’60s, there was no money in the game… over half of the Tamil Nadu (then Madras state) Ranji team was employed with India Cements. That’s how we learnt to manage games. When people talk about the success of CSK, people forget that India Cements owned the franchise. It did not own the players. So if you manage the number of cricket teams that we have, and successfully at the league level, you know how to manage a team. Cricket culture and thinking seeps through every floor here, and the company.

Q. ON CSK’s ban for two years
It was unfair. What did the players do? Why did you ban CSK? But look at it this way: You ban CSK, split it into two, one half here and the other there (Pune), then the team comes back and wins the tournament. That shows that it was in the minds of every player that they were unfairly banned. You must understand the politics behind it. People took potshots at me… courts got involved.

The public has not accepted it (so-called taint after CSK ban). That mud has not stuck on me. My detractors tried their level best to get the players to criticise me. Unfortunately, not one has spoken against me. Had they got somebody, it would have been a body blow for me. I never gave up. I will never give up.

Q. On India Cements owning an IPL team and conflict of interest
I got an invitation from Lalit Modi to bid for an IPL team. I wrote a letter to then BCCI president Sharad Pawar, asking him if I am allowed to bid because I happened to be the treasurer of BCCI. I got a letter from him, saying there is no issue in India Cements bidding and that he has consulted everybody. That is why Indian Cements bid. So where is the conflict of interest? I went through a proper administrative channel and procedure.

Q. On starting TNPL
After the CSK ban, we felt that Chennai would lose out on cricket. So we planned to create our own league. We felt that if we organise it well, you might get players from this tournament who could play for India and in the IPL. In this IPL, the joint-highest paid player in the bidding, C Varun, is from the Tamil Nadu league. Already three to four players, including Washington Sundar, have hogged the limelight. Even if one had been spotted, the objective of this league would have been fulfilled. When TNPL is being played, scouts from other franchisees come to see who all are playing. With more players coming out of TNPL and playing for IPL or state teams, we have won.

Q.  On making a comeback to BCCI
At the moment I am completely involved with India Cements. Whatever I say would be speculative. We will see when it comes to it. First Indian cricket needs to be saved. All of us have one abiding interest: Cricket in India should be saved. My interest in cricket will never go away, whether I am in an administrative role or not.

One thing I can say for sure is that as a cricket administrator and as an entrepreneur, there is one common thread: I never gave up, I will never give up. There was a time when I was not in India Cements. But I never gave up on the fact that I will come back and run this company. The important thing to remember is that if you believe you are right, don’t give up. You will eventually win.