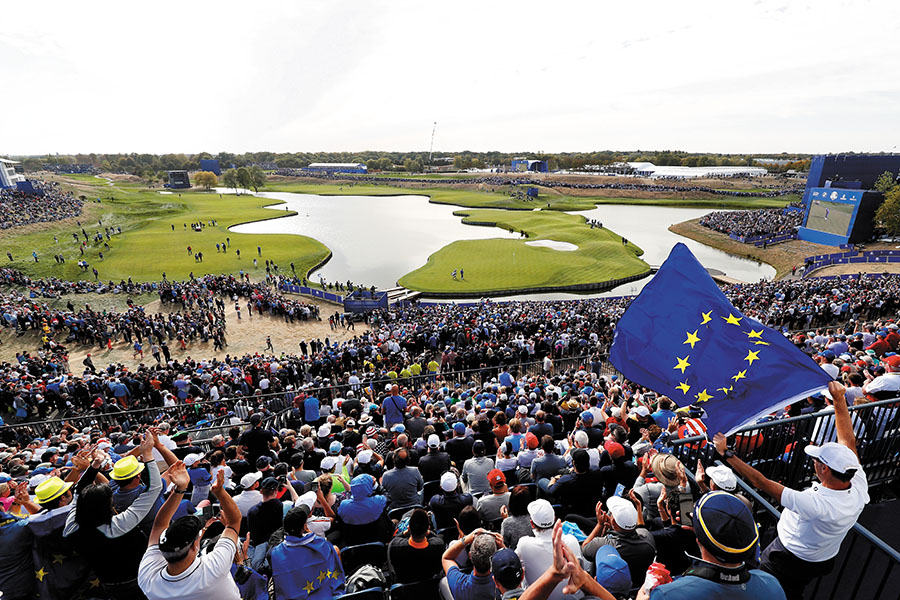 A view of the 18th green during singles matches of the 2018 Ryder Cup at the Le Golf National in Paris
Image: Luke Walker/Getty Images

The Parisian sun was yet to break out on a chilly September morning. The accompanying breeze made stepping out in the open without woollen caps and leather jackets a daunting task. And yet, Le Golf National in suburban Paris was packed with spectators flaunting colourful headgear, funky clothes and enthusiasm that would match the fervour at an Indian Premier League cricket match or a Super Bowl game in the US.

The atmosphere at the golf course—venue to the prestigious Ryder Cup—was in sharp contrast to the sedate 40-minute drive from close to the Eiffel Tower to the location. The roads were bereft of people, traffic non-existent and the silence in the car, which had journalists from different continents, was only broken by the constant chatter of the driver, filling us in with unknown details of the city’s landmarks as well as the biennial tournament for men, played between the European and American teams.

The rivalry was intense; though there was no prize money involved, pride was at stake. A lot of it. That came across in the battle of slogans, involving supporters of both teams, and the waving of flags in the stands. This was at least an hour-and-a-half before the first tee and after a lavish breakfast, complete with croissants and steaming hot coffee.

The robust attendance was merely an extension of the pre-event euphoria. Even in the two days prior to the tournament, at least 30,000 people congregated at the course to see some of the world’s best golfers practice. Organisers claim that the 2018 Ryder Cup, sponsored by premium luxury watch brand Rolex, saw the presence of about 200,000 people over three days.


It was the first time that Paris hosted the tournament, which is held every two years, alternately on American soil and European turf. That explained the unbridled passion for the sport in France, which usually shows a greater affinity to football, basketball, handball, athletics and tennis. Hordes of spectators from all over the world came just for the opportunity to see marquee players such as World No 1 Dustin Johnson (US), Rory McIlroy (Europe), Justin Rose (Europe) and the legendary Tiger Woods (US).

One of the most endearing moments came not on the nearly-7,000-yard course, but in a small practice area behind the playing arena on the final day. While onlookers clicked a flurry of phone photos of Johnson and Rose putting under the watchful eyes of their coaches, a security guard’s son walked onto the greens to meet his idol. Rose not only shook hands with the kid but also bent down to give him a warm hug, eliciting a unanimous ‘awww’ from the crowd.

Sport, despite its competitive nature, is also about human emotions. And many were on display over the three days that the tournament was played. Agony was followed by ecstasy and disappointment soon gave way to acceptance. As players walked along the fairway from one hole to another, people tagged alongside, encouraging them to put in their best. Some even goaded Woods, who was struggling with form, to rescue the US team from the hole they found themselves in at the end of the first two days, with Europe taking a sizeable lead of 10-6.

Image: Chris Turvey/Rolex
Keith: Chris Turvey/Rolex; Nicolas: Aly Song/Reuters; Carin: Thomas Lovelock/Rolex
It wasn’t only about the players though. The crowd had their own moments between shots as the warm afternoon sun made it a perfect day to be outdoors. Sipping beer and tracking every move on the course with binoculars, they engaged in friendly banter with rival fans. A bunch of American supporters—dressed in white full-sleeved T-shirts, blue shorts, dark glares and hats with protruding horns, with the US flag attached—were in high spirits. They chanted ‘USA’, ‘USA’ to a TV crew, even though their team struggled. European supporters countered these moments with ‘Ole’, ‘Ole’ chants of their own.

The cacophony, however, would come to an abrupt halt seconds before a player was ready to tee. The silence would get deafening. As Belgian golfer Nicolas Colsaerts, 35, put it: “You can hear a pin drop. It is better to have little noise constantly than to have nothing at all because then you start to hear your heartbeats. That’s when you start to think about things that maybe you shouldn’t be thinking.” 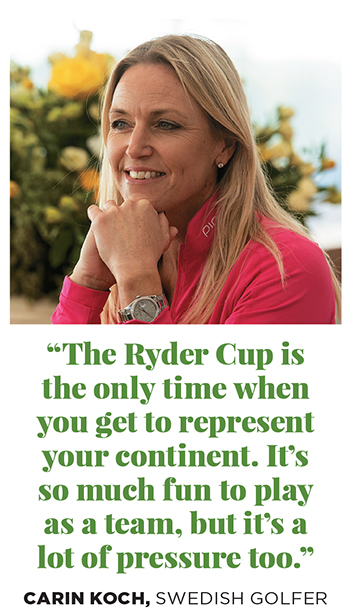 For players, the adrenaline rush of performing before a mammoth crowd is inexplicable and the pressure immense. The overall buzz, atmosphere and razzmatazz associated with the Ryder Cup make watching golf an exciting proposition. The deep involvement is exactly what the organisers are looking for in their quest to make it an entertaining event. Golf is a quiet, traditional sport, but stakeholders believe it can be made into a lively game for millennials without compromising on its legacy.

“People are here because they love golf, but they love golf because it is entertaining. That’s the business that we are in: Entertainment. Our players are the recipe for success, but our consumers are our lifeline,” says Keith Pelley, 54, CEO of the European Tour.

The carnival put a lot of emphasis on improving consumer experience as compared to the last edition, held in Hazeltine, Minnesota, in the US in 2016. Which is why a special village [a massive viewing area with seating arrangements] was created near the entrance for spectators to watch the game on two gigantic screens with live commentary; shop as they liked at souvenir shops; and eat and drink to their heart’s content at the many stalls set up there. Besides, they could take practical sessions on playing golf at no cost.

As simple as the game looks from the outside, it takes relentless practice to ensure that the ball hits the sweet spot of the club regularly. A special 40-minute clinic at the pretty Saint-Nom-la-Bretèche golf course, organised by Claude Harmon III, coach to Johnson and even Woods previously, made us novices realise that. We attempted a few elevated shots and learnt the importance of stance, technique and hand-eye coordination the hard way. The difficulty in consistency made us appreciate the players even more.

The Ryder Cup offers players a rare opportunity to play as a team for their country/continent, as opposed to individual competition in other tournaments. No wonder it was being closely followed by the likes of tennis legend Stefan Edberg, French tennis player Jo-Wilfried Tsonga and the Prince of Monaco from the Rolex hospitality box at the venue. “Rolex has an unwavering commitment to the game of golf. It’s great to be associated with such a terrific brand as it strives for complete excellence,” says Pelley.

On the course, too, the players showcased brilliance at every juncture. Europe had taken a formidable lead at the end of the second day; the Americans needed something special to change the opponents’ record of always winning the Ryder Cup on home soil, since 1993. The festive atmosphere continued till it was evident that Europe would lay its hands on the trophy.

Against the backdrop of the setting sun, the bubbly flowed at the presentation ceremony. The public got their money’s worth even while they exited the venue. Three days had passed in a jiffy, spent on an expansive, lush-green stretch.

In the remaining time on hand, from exploring Paris on foot to hopping on a night cruise on the Seine River on a windy, full-moon night with the glittering Eiffel Tower for company, the French capital was a delight. There was so much on offer and plenty to savour, including its delicious food, wine and champagne. For a city famous for its architecture and fashion, golf was a welcome addition to its character.