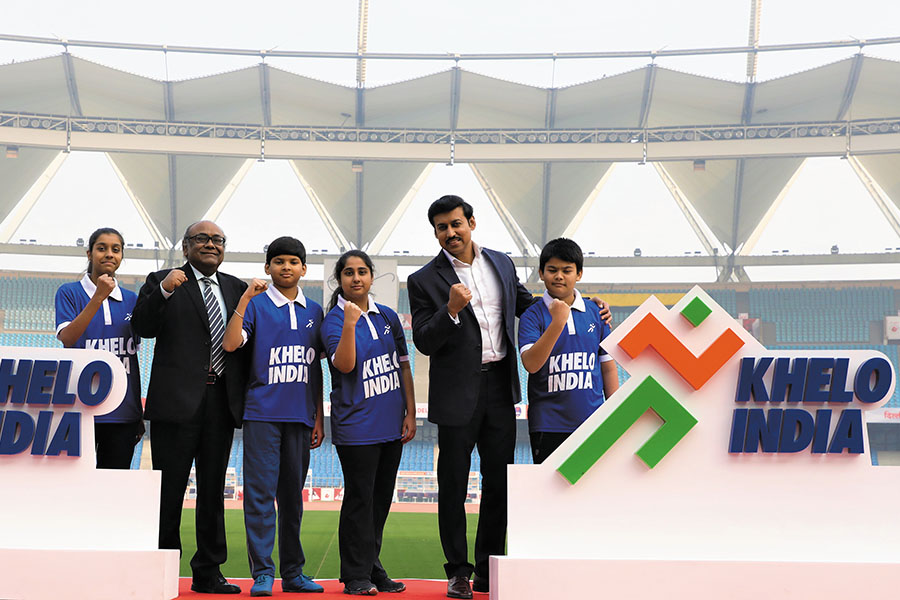 Q. It’s been a month since the conclusion of the Khelo India School Games. What have the young athletes got out of the competition?
India has great potential, what it needs is a platform to perform. Khelo India was our endeavour to provide an aspirational platform at a young age. It’s going to be part of an annual calendar, so that the kids can prepare for it. Thus, we create a system that connects the villages to the Olympic Games and with it the potential to the podium.

One of the biggest issues for a young athlete is to get the right resources. As part of the Khelo India Games, we’ll select 1,000 children every year and give them a sponsorship of `5 lakh for eight years. There are two things that you achieve with it. One, you set a benchmark for a competition, which till now used to be of a low standard. Two, we are picking up talent at a young age and providing them with resources.

Q. How will the progress of these 1,000 athletes selected every year be monitored to ensure the award is used fruitfully?
We are creating an IT structure to monitor the performance of these athletes on a regular basis. We’ll also be holding a counselling session with each athlete so that the resources that we are giving them, the training centres we are choosing for them, are tailor-made for their requirements.

In our endeavour to make the ministry [of youth affairs and sports] professional, we’ve hired a lot of experts to interact with these athletes, to be able to judge their requirement and act expeditiously. We’ve cut out the red-tapeism. We are working on an app through which the athletes who will be funded by us can always be reported upon after every training and competition and another system through which the athletes can provide us with anonymous feedback on the staff, coaches and managers.

Q. What are the tangible targets for the Khelo India initiative over the next five years?
Khelo India is trying to bring about a behavioural change and make sport and fitness a part of life. Within the programme, we have 12 verticals. Some of the most exciting ones are, of course, the under-17 and under-21 competitions, but we’ll also focus on women in sports. We’ll try to bring as many women to sport because only when you involve women does sport become a part of the entire family. We are also working on the development of coaches, a programme to train the trainers, certifying them and making their information available on the websites. We are also looking at using sports to bring peace in areas of conflict. We are especially working on Jammu & Kashmir, which has been allotted ₹200 crore, and, as we speak, there is a grassroots football tournament going on where 70,000 athletes are participating.
Another thing we are working on is creating a mobile application on where to play and how to play. We will map the entire sporting infrastructure of the country and put it on the app, so that it’s easy to find out the nearest play field. It would also have the basic rules and tips on how to play a game. The idea is to let kids access information that a lot of elite sportspersons receive much later in their lives.

Another vertical is talent hunt. Although the school games are helping us identify talent, we will launch a separate programme for young players (around 11-12 years) to test them on their motor skills and identify those who can be groomed.

Q. How can corporates contribute to building the sports climate in the country?
To take sports forward, all stakeholders should come together and the private sector is an important one. Something that few are aware of is that Olympic funding is done through the National Sports Development Fund (NSDF), which is a federal fund and affords tax benefits. Plus, any money that comes in from a private donor, the government is duty-bound to put an equal amount. Besides, the donor can identify the sport, the sportperson or the location where this money should be spent. This is where the private sector can play a handy role. Besides, we also want professionals to operate the centres of excellence and academies coming up with our partnership. We’ll fund and set up infrastructure for academies that are run by elite athletes, and we are recruiting professionals from the private sector to help us as officers of the Sports Authority of India.

We are also looking at creating a think-tank of like-minded individuals who share the same passion for sport like us, to create an advisory body. This will require top corporates who have done substantial work in sports to be ambassadors for this movement.

Q. The Khelo India School Games were broadcast live on Doordarshan and Star Sports. How did that help in expanding the outreach of the event?
There are two main stakeholders for sports: The sportpersons themselves and the fans. There are a large number of people watching the sport on TV or through digital handsets. In this, the media acts as a multiplier and when the quality of the broadcast is good, the games become aspirational. This is why we wanted a high quality of HD broadcast and that resulted in a reach of about 100 million people. This will make the subsequent games more competitive. Every child will now aspire to be a hero.

Tweets by @forbes_india
We go where the demand is: NY Film Academy's David Klein
Risotto, please. With salan on the side: Restaurateur Ritu Dalmia begins European expansion