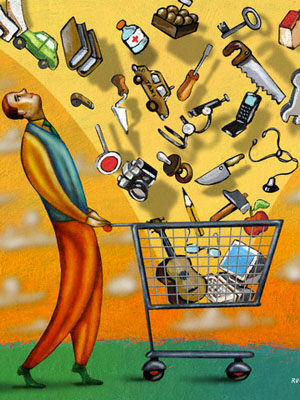 Managers at Futurebazaar.com, the e-commerce arm of Kishore Biyani’s Future Group were in for a pleasant surprise in the first week of November 2010. An online sale featuring 40 laptop models was a huge hit. The sold out sign featured prominently across most models listed on its Web site. By the end of the week they’d shipped 4,000 units adding Rs. 10 crore added to revenues.

With shoppers back in stores Biyani is attacking another part of the retail pie — e-commerce. His aim: To have this business notch up Rs. 1,000 crore in yearly sales. That’s nearly as much the total size of the e-commerce market in India.

Online retail has been dogged by a now familiar litany of issues like low Internet and credit card penetration and buyers loath to buy products they haven’t seen before. But most watchers now believe sales are poised to take off. Ankur Dinesh Garg, managing director, Wirefoot Consulting, an Internet and mobile consultancy, forecasts sales to touch Rs. 2000 crore by 2014.

It’s a market that rivals have also tapped into. Last year eBay also got into the deals business offering daily and weekly deals on items like electronic gadgets and home furnishings. Others like Croma, the electronics retailer owned by Tata Sons, say that they’re studying the market for Web-based retailing closely.

Futurebazaar has worked on differentiating itself. In its earlier avatar the site served as a parking spot for listing products across various Future Group formats like Big Bazaar, Pantaloons, Central, eZone and so on. All that’s changed now. From now on its sole focus is deals. “We want to make this a site where you go to get the best deal on a particular product,” says Rajiv Prasad, CEO, Futurebazaar.com. If a customer finds the same product cheaper elsewhere the company says it will pay him at least twice the difference.
Prasad has also worked on creating stickiness. Interested buyers must register before a sale starts in order to be eligible to make purchases. He has set up two dedicated warehouses in Bangalore and Mumbai to guarantee seven day delivery. Buyers can track the status of their shipments online — an option few e-retailers offer.

But despite the success with the laptop sale the site has also had its share of setbacks. Its first mobile phone sales promotion received a lukewarm response. The company managed to sell only 4,000 phones with an average purchase price of Rs. 2,500. This is far below the tens of thousands it hoped to sell. “We realised that users were looking for a wider assortment. The forty phones we offered were insufficient,” says Kashyap Deorah, CEO, phone commerce at Future Group.

Futurebazaar says the learnings from these two sales have been invaluable. Customers are not diffident in buying high value items if they can see a clear benefit. As many people bought laptops as mobile phones. With low value items giving buyers the option of paying upon delivery works best while EMIs work best for high value items. Second, one in every four buyer bought both products emphasising how important stickiness is for them.

Next in line are items like cameras and LCD TV sets. Apparel and shoes are planned for next year. And if it all works out Futurebazaar hopes to sell cars and motorcycles online someday.