India stands on the brink of a major growth revival accompanied by a big investment opportunity, says Bain and Co’s India Private Equity Report 2015. This is illustrated by the increasing number of funds investing in India; the number has risen nearly 30 percent in 2014 over 2013. Of the nearly 440 funds that invested, close to 50 percent were doing so for the first time in the past three years. 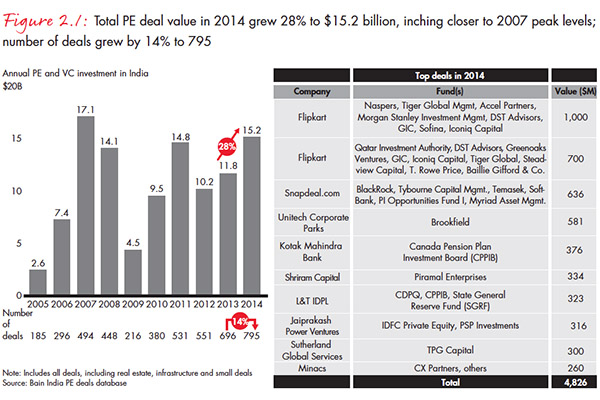 The report says deal activity in the country is expected to rise. General partners (or fund managers) point to a strong macroeconomic environment, changes in the exit environment and evolving investor sentiment as the top drivers.

Rising competition and a mismatch in valuation expectations are the probable near-term challenges in the private equity (PE) space. "2015 is going to be tough as valuations are very high, and from a PE point of view, returns might be questionable as compared to the value of the investment made," said a fund manager in the report. 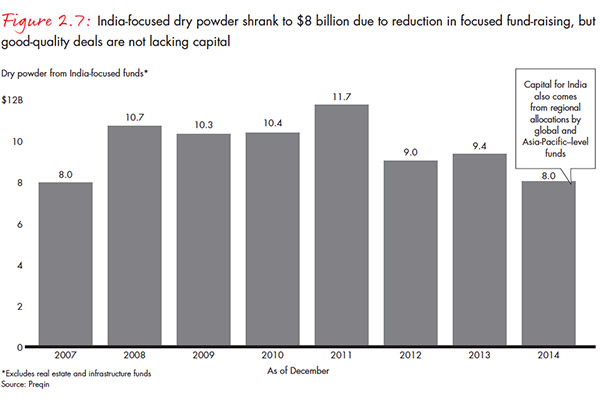 Deal activity was clearly robust in 2014, as deal values and volumes grew at approximately 28 percent and 14 percent, respectively. Indian PE and venture capital (VC) deal value stood at $15.2 billion in 2014, the highest in the past five years.

Consumer technology, real estate and banking, financial services and insurance (BFSI) sectors were the key drivers for the increase in total deal value. The average deal size of PE investments rose by 28 percent over 2013, reaching $53 million in 2014. 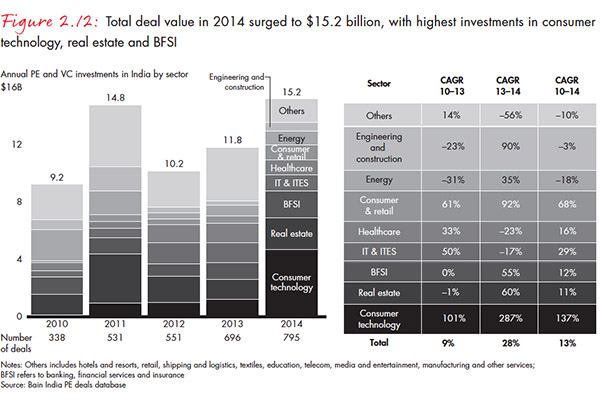 In 2014, the number of deals worth more than $100 million increased. As a result, the top 25 deals accounted for $6.4 billion of the capital deployed, constituting 49 percent of the total PE deal activity. In the same year, consumer technology emerged as the most attractive sector for PE and VC investments, with the most deals and highest deal value across sectors.

"Competition has increased especially for sectors like consumer technology since a lot of hedge funds, etc are also trying to invest in the sector," said a fund manager in the report. 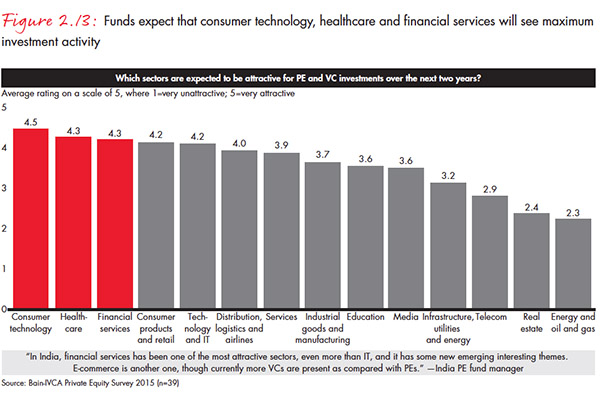 The dampener, however, is that India’s dry powder (capital available in hand for deployment) from India-focussed funds dropped to $8 billion due to significant deployment of investments in 2014, the same levels as in 2007. Reduction in focussed fund-raising also added to constricting dry powder. Experts  assure that good-quality deals are not lacking capital.