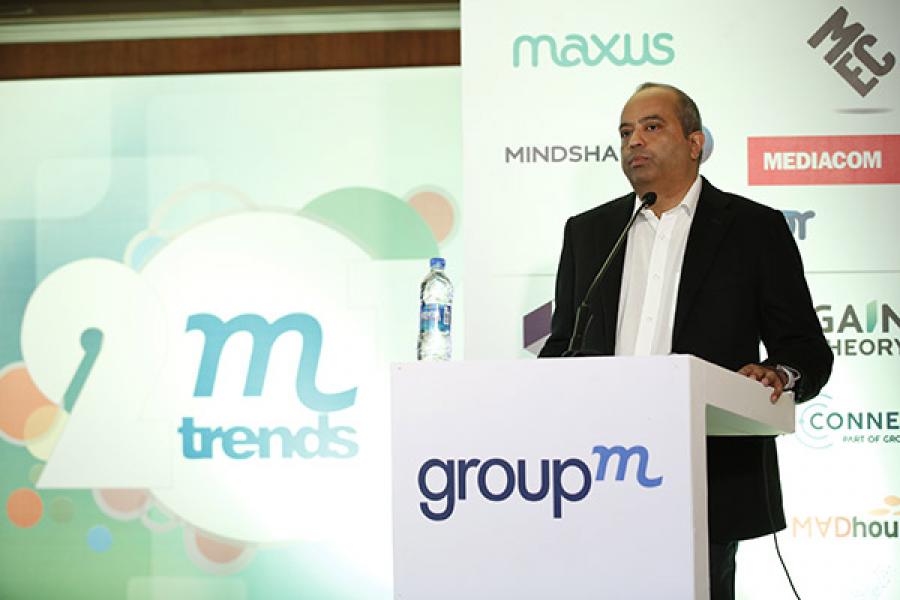 India’s advertising investment is estimated to reach Rs 57,486 crore in 2016, according to global media management investment conglomerate GroupM’s ‘This Year Next Year’ report released on Tuesday. This represents a 15.5 percent growth for the calendar year over the corresponding period in 2015.

“India is the fastest-growing ad market among all the major markets of the world. 2015 was the best year for ad spend growth we’ve had in the last five years,” said CVL Srinivas, CEO, GroupM (South Asia). The advertising expenditure (AdEx) grew by 14.2 percent to Rs 49,758 crore in 2015. 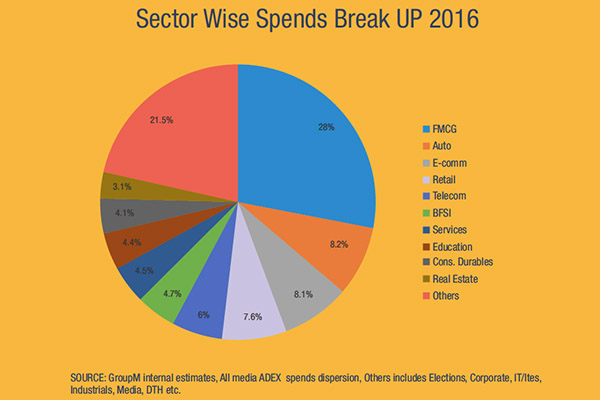 The report states that FMCG remains the most dominant sector with a 28 percent share of the AdEx. It is followed by auto and ecommerce, with a share of 8.2 and 8.1 percent respectively. Srinivas said while these have been the top sectors in 2015 and will continue to invest, other sectors like telecom, banking and financial services and insurance (BFSI) and the government sector will also see a ramp up.

Ecommerce ad spends too are expected to be high, owing to increasing competition, market expansion and newer players entering the market. Further, the advent of 4G services, launch of Netflix and upcoming events like the T20 World Cup, state assembly elections and non-cricket sport leagues will contribute to this growth.

And digital advertising is clearly the fastest-growing medium. GroupM estimates the digital AdEx to grow by 47.5 percent in 2016 to Rs 7,300 crore from the earlier Rs 4,950 crore. It is estimated to take a 12.7 percent share of the total AdEx this year. 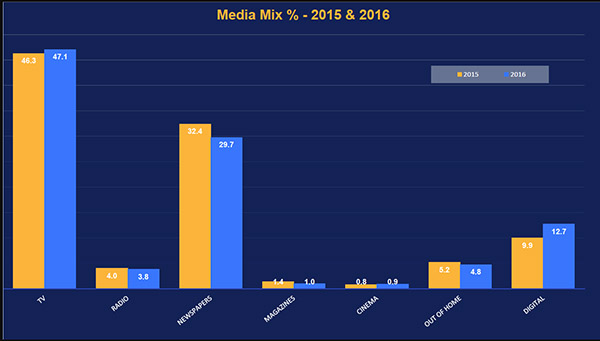 Lakshmi Narashimhan, chief growth officer, GroupM (South Asia), said, “We have seen focussed targeting of digital and native advertising with programmatic buying over the last two years, and this momentum will continue in 2016, as automation increases."

Interestingly, while digital will remain the fastest-growing platform, India is one of the few large markets where all traditional media platforms will show positive growth.

The report predicts that 2016 will be a better year for newspapers due to expected increase in ad spends from print-heavy sectors like auto, BFSI and the government sector. Regional advertising of Telco and FMCG brands will benefit language dailies. Radio is also expected to grow at around 10 percent, but has scope to grow faster when the new stations, set up after Phase III licenses were issued, are fully operational. Additionally, cinema advertising, which currently accounts for less than one percent of the total ad spend, is estimated to have a 25 percent growth this year.