Investors should view FY21 as a blip: Raamdeo Agrawal

While putting together a 25-year study on wealth creation, Raamdeo Agrawal, chairman and co-founder of Motilal Oswal Financial Services, talks to Forbes India about the investment philosophies that have stood the test of time 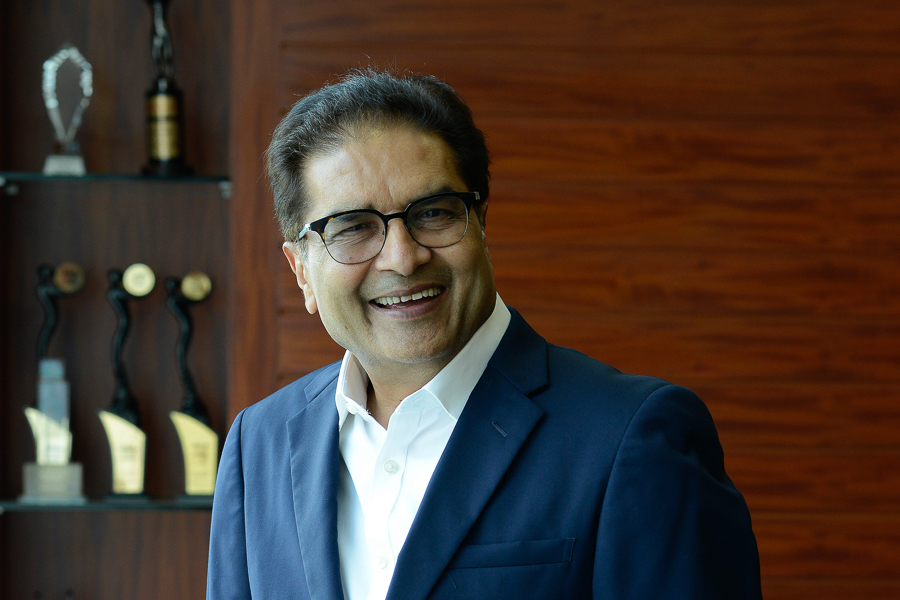 Raamdeo Agrawal was in his cabin at Mumbai’s Motilal Oswal Tower, surrounded by a range of drafts of the Motilal Oswal annual wealth creation report. As the tumultuous year was drawing to a close, he was identifying aspects of investing and wealth creation that had played out over the past 25 years. Every year he presents a study of wealth creators of the previous five years, but to commemorate the 25th such report, the research team had looked at wealth creators since 1995, a time when investors were rocked by several cases of price manipulation of stocks, such as Sesa Goa and Rupangi Impex, at the stock exchanges.

“Our study showed clearly that time is a friend of good companies and an enemy of bad companies. We have seen that badly governed companies might have grown the fastest, but did not last 25 years,” says Agrawal, who has been an investor at India’s stock markets for over 35 years.

The critical mantra that investors should watch out for—as seen through this 25-year study—is stability in the management and business. This is best demonstrated by Kotak Mahindra Bank, which featured very high in several of the report’s wealth creators’ lists. 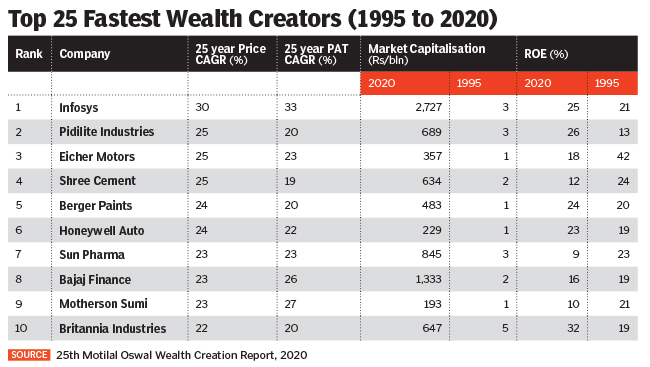 “I was stunned [by Kotak’s consistency],” says Agarwal. Infosys, one may recollect, grew sharply between 1995 and 2004, fueled by offshore software development centres, before slowing down into the current decade. Conversely, growth for non-banking financial company Bajaj Finance was slow to begin with—by financing  durables in the initial years—but grew exponentially over the past 12 to 13 years. Infosys and Bajaj Finance rank 61 and 15 respectively in the top 100 consistent wealth creators.

HDFC Bank, India’s largest private bank by market capitalisation, is not part of this 25-year study since it completed its first full year of operation in FY96. In the 24th Motilal Oswal five-year wealth creation report released in 2019, HDFC Bank had ranked second among the ‘biggest wealth creators’ (2014-2019), behind Reliance Industries, and 9th among the most consistent wealth creators. 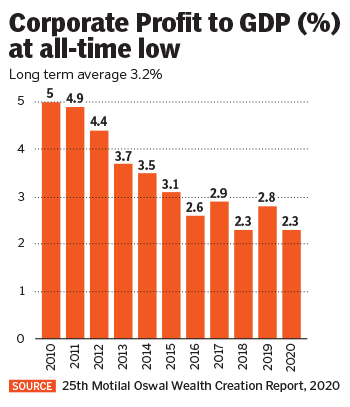 Low P/E multiple, high growth
Agrawal reiterates that investors who are starting off should look for companies with a low P/E multiple, but mixed with high growth, besides also studying a company’s return on equity. “There is no use looking just for cheaply valued stocks that are degrowing. Growth is an amplifier of the health of a company,” he says.

KMB’s consistency was also indicative of a stable vision of the leader and management integrity. This has also been seen in the case of HDFC, Pidilite Industries or Motherson Sumi, all in the top 10 consistent wealth creators over 25 years. “It is important that companies show consistency in thought, vision and integrity… it will reflect in the earnings of a company. An unrelated business merger or misallocation of funds or change in leadership would impact functioning,” Agrawal says.

The year 2020, where businesses, jobs and lifestyles were ravaged by the Covid-19 pandemic, saw the smallest amount of wealth creation among the last five years: Rs 26 lakh crore, compared to Rs 49 lakh crore in 2019.

Covid-19 gainers
Besides startups that tweaked their business models to deal with the pandemic, there have been some companies such as Kilpest India (it makes RT-PCR kits to test for the Covid-19 virus) and Molbio Diagnostics (a research-led diagnostic firm) that have shown strong earnings growth. Kilpest’s profits in the September-ended quarter rose to Rs 52 crore from just Rs 2 crore a year earlier.

Motilal Oswal Private Equity has invested in Molbio this year.  Agrawal says it is critical to understand the nature of business for these types of companies, which are well positioned to take advantage of the current ecosystem and generate strong earnings growth.

The principle of understanding a company’s business was demonstrated when Agarwal had, very early on, identified AU Small Finance Bank as a company to invest in. “We saw value migration there, from the current business model to a new-age model,” he says; Motilal Oswal Mid-Cap 30 Fund has invested in AU Small Finance Bank.

India’s banking sector had witnessed value migration earlier when private banks, led by digitisation and diversification in lending, started capturing market share from state-owned banks. Agrawal expects new-age banks to continue to grow due to “strong tailwinds”, as long as their loan book is managed well.

Focus: New-age; consumer-facing companies
Motilal Oswal asset management will continue to focus on investing in consumer-facing, B2C companies that are focussed on digital processes such as adoption of Internet of Things and cloud-based deliveries. “These will form a major part of our portfolio,” he says. The telecom sector also continues to hold huge potential, but there are concerns over asset turnover growth.

Agarwal says that despite the recent record highs, the stock market indices do not appear too stretched. “The markets are just about 8 to 12 percent higher over last year’s level at this time. With low interest rates and high liquidity, I do not think we are in a bubble-type scenario,” he says. While 2021 would see the pace of growth picking up, the real challenge will be to sustain the growth momentum in 2022.