The actor duo speaks to Forbes India about the challenges of remaking a legacy series, and what sort of homework it took for them 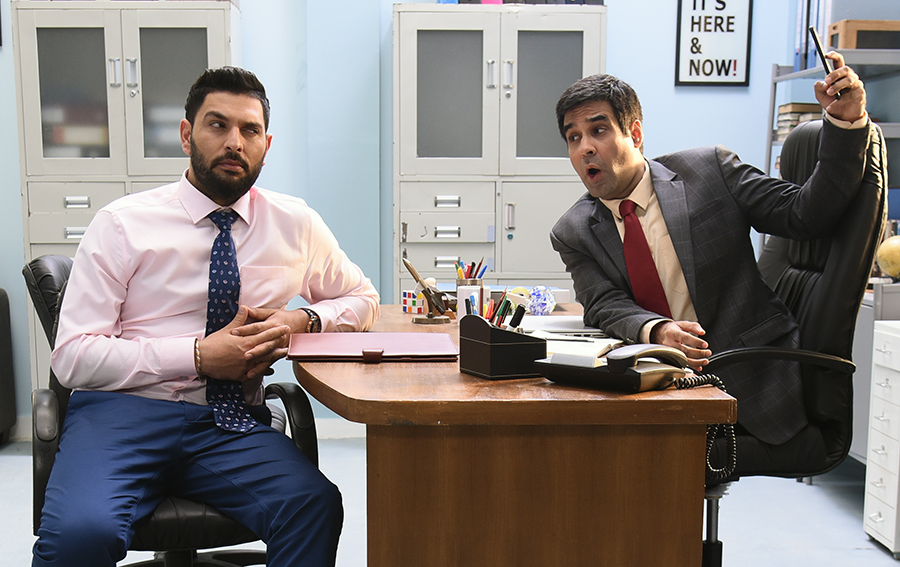 The Office, created by Ricky Gervais and Stephen Merchant was already a hit comedy in the UK. But it reached greater levels of popularity when Greg Daniels (former writer on Saturday Night Live and The Simpsons) adapted it for US television. Michael Scott, Dwight Schrute became the characters one identified their colleagues with. The ‘will they won't they’ back and forth of the onscreen relationship between Jim Halpert and Pam Beesly found its own fandom. The mockumentary stars became big names in Hollywood with Steve Carell bagging nomination for Oscars, John Krasinski dazzling the world with his directorial venture A Quiet Place, and Mindy Kaling creating two shows on her own. The show was remade in nine different countries and the official Indian remake of The Office became the tenth adaptation.

When the trailer for Indian remake was first released, fans of the US version were afraid of a terrible copy of the work they still cherish. The feeling did not go away when the show dropped on Hotstar on Friday, June 26. Reviewers could not show their love for the series. The Indian Express said, "The office setup can be adapted in an Indian setting but when you start copying jokes, it makes the audience realise that the makers haven’t put in as much effort as we expected them to."  The Week called it 'a saga of missed chances.'

The Indian story is set in Faridabad where Jagdeep Chadda, played by Mukul Chadda, is the regional manager of a paper company called Wilkins Chawla. TP Mishra, played by Gopal Datt, is 'Assistant to the Regional Manager’. The duo spoke to Forbes India about fan reactions and the problem with remaking legacy series. Edited excerpts:

Q. Were you a fan of the original series before taking up the role?
Gopal Datt (GD): I am one of the biggest fans of the show. I had watched the UK version of The Office quite a while ago.

Mukul Chadda (MC): You won't believe this but I had not watched The Office before this project came along my way. When I got called for the audition, I started watching the US show, which was helpful for me.

Q. Why did you venture into Indian remake of a legacy show The Office despite knowing that not so great run of Hello Friends (1999), the Indian version of Friends?
GD: That was not the official adaptation. BBC was involved in this version, and it's a carefully crafted show. The writers have focused a lot on the scripts [to cater to an Indian audience], so this show is going to work, I am sure.

Q. How is the show adapted to suit the Indian context?
MC: The whole point of adaptations is that when you localise content, people relate to it better. Here, the language, dialogues, jokes, the very essence of the show is very local and Indian. This is set in Faridabad and not a large town, so many people should be able to relate.

Q. Both popular versions of The Office are still streaming. What do you think of the early reactions from the fandom, especially after the trailer release?
MC: Let's start with the second part because that is obviously on top of everyone's mind. The reaction—I found it quite hilarious, actually. I didn't take it seriously because to be very honest, nobody had watched the show. The comments were coming from the place of 'do not remake this show', which is not a comment on what we have done. The fans of the UK version are still angry that the US version was made. At one level, that reaction is a good thing. There's a lot of buzz around the show.
For the first part of your question, it's going to be impossible to not expect comparison. That's flattering at one level. I think both versions are very good, and I think if we are compared to them, I think it is also putting us in good company. People will have their favourites. All I care about is that they like this version.

Q. How did you approach your respective roles?
GD: TP Mishra's character has so many layers. It is very difficult to describe him in a word. Sometimes you will feel he is very ambitious, sometimes you will find him annoying. And at other times, you will also find him lovable. TP Mishra is a concentrated version of the real-life common man. You will enjoy this character.

MC: Watching the show did help me better understand Michael Scott's character, which forms the basis for Jagdeep Chadda's, who is a branch manager in Faridabad. When I first watched Steve Carell's Michael Scott, I was really blown away by his performance. I'll say that about Rainn Wilson playing Dwight as well. One of the things that struck me about what Carell and Wilson did was that they made you believe those characters meant what they said. This was a little hard in my case, because the characters are also spouting some nonsensical things. So you are on the edge because you are saying things that can border on being unbelievable, yet have to maintain the line. I knew I would have to create all kinds of peculiarity for Jagdeep. I put in a lot of home work in to that aspect before we began shooting. Q. Both versions of The Office have made fun of corporate settings seeking refuge in political correctness all the time. Given the current sensitive environment, how is this version handling those jokes?
MC: It is a sensitive topic and we were very conscious of it while making the show. It's a tricky line to do a balancing act on. The show is pushing boundaries, and this character is certainly politically incorrect without intending to be, on a variety of issues including sexism, racism, and all the other -isms. What was very critical was not the politics of the single character, but the politics of the show. That is something we have to be careful with. We don't want anyone to ever start thinking that the things Jagdeep does is condonable. It is important that the message the show gives out is correct, and we’re conscious of it.