Mayanti Langer: On the right pitch 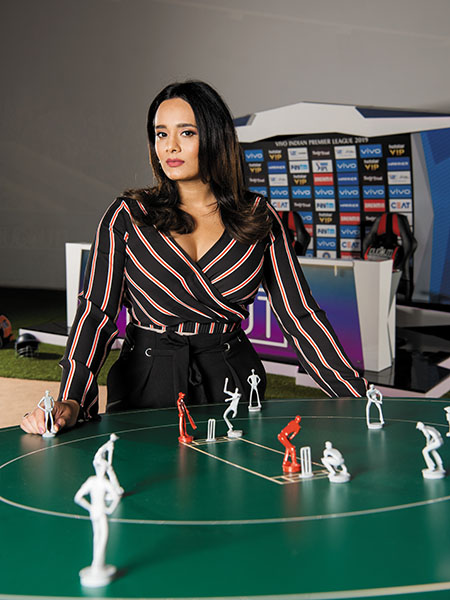 Mayanti Langer is regularly trolled on social media. To cut out the negativity, she has turned off comments on her Instagram account
Image: Mexy Xavier

When she was 11, she was not allowed to be part of a tournament group photo for not wearing a tennis skirt. King went on to win 39 Grand Slam titles in a career that spanned 25 years.

Known for her iconoclastic views, in September 1973, 29-year-old King took on former World No 1 Bobby Riggs, 55, in what was billed as the ‘Battle of the Sexes’, after Riggs claimed that women’s tennis was so inferior to men’s that even someone as old as him could beat the current top women players. In the match that was watched by over 90 million people across the world, King thrashed Riggs in straight sets.

“Pressure,” King wrote, “only comes to those who earn it”, in a book on her experiences, called Pressure Is A Privilege, published in 2008.

Cut to 2019, India. As she completes her 12th year of anchoring India’s biggest sporting event, the Indian Premier League (IPL), Mayanti Langer, 34, has carved out a niche for herself in the male-dominated profession of sports broadcasting and anchoring. “I don’t have a great story, but yes, it’s a different story,” she says.

Langer, who was born in Delhi into an army family and had no family members associated with the sporting world, is the only Indian woman broadcaster to have hosted six World Cups across three sports—hockey, football and cricket. She had been working with Zee Sports for three years when she got to be a guest anchor for a Fifa beach football event; but Langer’s first big break was hosting the 2010 Fifa World Cup for ESPN, alongside the likes of John Dykes. Alan Wilkins and Dykes, she says, were role models for presenters. “I didn’t see them as male presenters, but as sports presenters.”

Langer, who had aspired to become a graphic designer while in college, was neither a sportsperson nor a celebrity; she did not have a pedigree in the world of broadcasting either. If King had to face sexist jibes in her fight for gender equality and equal pay, Langer had to grapple with vicious online trolling. When her cricketer-husband Stuart Binny didn’t perform well on the field, Langer had to face the heat. In addition to this, she had to combat body shaming, jeers over her “five-inch heels” and “dressing sense”. “I still get trolled every day,” she says.

Much like King, Langer mastered the art of tackling pressure. The best way to deal with the expectations that come with rubbing shoulders with former cricketers is to learn as much as possible about the game. “I really worked hard on it,” she says. And the fact that she wasn’t a celebrity or a model turned out to be a blessing in disguise. “I never had the pressure of having to always look glamorous,” she laughs. “I was a tomboy and I still am.”

In being an outlier, Langer was similar to another non-cricketer commentator and broadcaster, Harsha Bhogle. In an interview to sports news website Cricbuzz, Bhogle had said, “I always say this to female anchors, ‘I have one advantage that you will never have. I’m under no pressure to look good. You have to look good. But if looking good is all that you can do, two years later there is another girl coming along to take your place’.”

Langer, like Bhogle, honed that one skill she could—knowledge about the sports. “I felt that the skill that I needed the most to develop as a broadcaster was gaining as much knowledge as possible,” she recounts. “Maybe that was the difference.”

“ I was never cut down for being a woman. I didn’t have to think about my gender...  but I don’t think I have the skills to be a commentator.”

Apprehensions about sharing the screen with the best cricket brains were also, eventually, laid to rest. When you are talking to Sunil Gavaskar or Kumar Sangakkara or Brendon McCullum, she says, are you or they going to tell the viewers how to play the game? “So I took the pressure off myself,” Langer concedes. All that was needed, she convinced herself, was the art of conducting a conversation and the need to ask the right questions. “That’s all what I needed to do,” she adds. “And I guess it worked.”

The rise of Langer mirrors the coming of age of women anchors in sports broadcasting in the US. When sports broadcasting began there in the 1940s, it was dominated by men. “It was not till the 1970s that women started knocking on the doors of the male bastion,” says Abhishek Dubey, sports writer, author and columnist. Though initially they were looked upon as “eye candy”, they began to garner respect from viewers and gained credibility. Today, American sports broadcasting boasts women stars such as Rachel Nichols, Jenn Brown, Charissa Thompson and Michelle Beadle, adds Dubey.

India followed a similar trajectory. Over a decade ago, when Mandira Bedi and Roshni Chopra took to cricket broadcasting, the idea was to include some much-needed “visual relief” and a female voice and face in a game that was catching the fancy of women. “The intent was to add glamour and make it a mix of cricket and entertainment,” says Dubey. When former women cricketers such as Anjum Chopra, Isa Guha, Melanie Jones and Lisa Sthalekar took to commentating, they brought in the know-how that was earlier lacking.

Langer, however, proved to be an exception. “She is not a cricketer or a footballer. She is a commoner,” says Dubey. “Langer’s phenomenal rise as an anchor of substance proves that Indian sports broadcasting may soon have its own version of Rachel Nichols, Jen Brown and Alex Curry.”

Langer’s success marks a huge transformation in the field of sports broadcasting, especially cricket. Reason: More women are watching the sport. The average viewership of women watching the IPL increased by 15 percent in the first four weeks of the tournament this year, as against the same period last year, according to data from Barc. Growth in viewership among women, men and children stood at 15 percent, 13 percent and 29 percent, respectively.

Langer’s rise has coincided with the inclusion of women in the top administrative positions of the Board of Control for Cricket in India (BCCI). Former India captain Diana Edulji, who is now part of a Supreme Court-appointed Committee of Administrators that oversees the BCCI, is an example of someone who has broken the glass ceiling. In August 2017, speaking at a private event, Edulji said, “The BCCI is a male chauvinist organisation. They never wanted women to dictate terms or get into this thing... I’ve always been a BCCI basher, right from the day women’s cricket came into the BCCI fold in 2006.”

However, not everybody feels as strongly as Edulji. Jatin Sapru, another non-cricketer broadcaster and commentator, for instance, feels a lot has been done over the last few years to get more women into the game. “They have earned their place,” he says. Langer, he adds, is doing a terrific job. “She is a role model for the nation,” he says.

Langer credits her success to the people who had faith in her. “Imagine what a call it was by the person who decided that Mayanti Langer can host a football World Cup along with John Dykes,” she says. “It was a brave call.” Football broadcasting was what sowed the seeds of confidence in her. “I don’t think any girl had done Indian football in India a decade ago,” she says.

Right from the people Langer was working with, to being the only woman in the team, sometimes in the stadium, working as a football broadcaster instilled loads of confidence in Langer during the early years. “I was never cut down for being a woman. I didn’t have to think about my gender,” she says, adding that she was fortunate enough to have a great bunch of colleagues such as the late Tony Greig, Dean Jones, Kapil Dev and Sapru. The nature of work and its responsibilities, she says, is the same for all broadcasters. There is one difference, though. “Nobody tells Jatin [on social media] to wear a shorter skirt or expose his biceps or muscles.”

Gender was the reason for incessant trolling on social media, the intensity of which even had her parents worried. One day, she recounts, her father asked her if she still gets trolled. “Either wear less clothes or wear more clothes is what I get to read,” she replied. “This is all that I get on social media.” To cut out the negativity, she has turned off comments on her Instagram account. “I don’t want such things to create undue pressure.”

Ask her if she would like to become a commentator, and Langer smiles. “I don’t think I have the skills to be a commentator. I can be a presenter,” she says. Isha Guha, she adds, is one of the best commentators in the world. “I am not saying ‘woman commentator’. She is incredible.”

One has to earn the right for a place, and it comes with a fair bit of grit, struggle and pressure. The WhatsApp display message of Langer sums up her approach towards life: Pressure is a privilege.