Gurugram, Noida and Ghaziabad offer a fertile environment for startups with their glitzy infrastructure, low cost of operations and availability of top talent 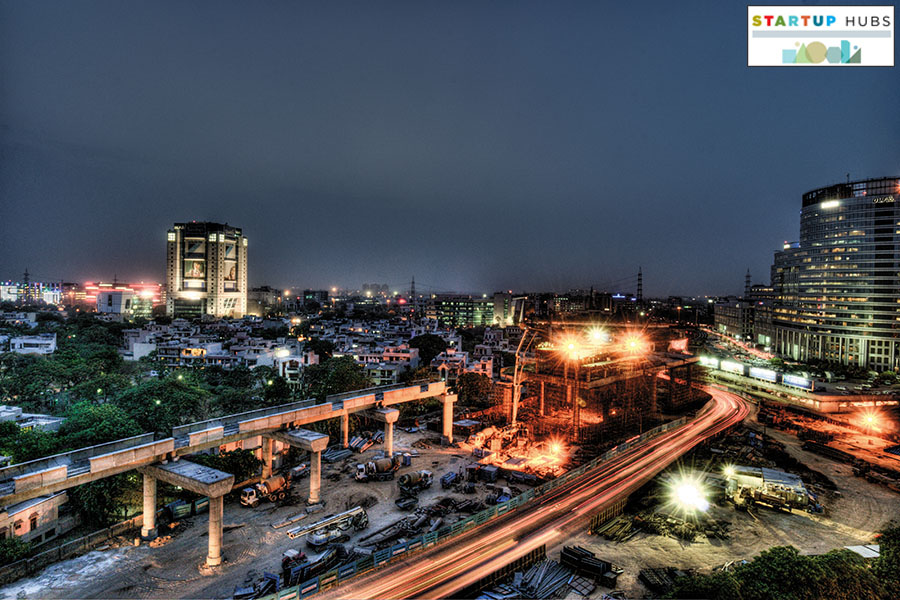 Gurugram is home to over 1,500 startups
Image: Amit Verma

When Advait Kumar, founder of water technology startup Swajal, returned to India in 2014 for his entrepreneurial foray after a stint with JPMorgan in the US, he was sure where his company headquarters would be. “It had to be Gurugram. It’s close to South Delhi,” Kumar, 27, tells Forbes India. “Gurugram is cheaper and has some of the best office spaces I have ever seen in my life, even better than in the US. The entire ecosystem is meant to make it easier for a startup.”

Kumar and his mother set up Swajal, a solar power-based clean water solutions provider, which has been installing ‘water ATMs’ across the country since 2014.  “A lot of our work requires meeting government officials,” says Kumar. “So Gurugram made better sense because it has low rentals… keeping the operational expense to the minimum is necessary for a startup. Today, of course, Gurugram is also becoming expensive in terms of rental.”

Gurugram, along with Noida and Ghaziabad, the satellite areas of New Delhi, have fast emerged as alternatives to the national capital as a startup hub. Thanks to cheaper rentals, a steady business ecosystem, including investors and the availability of skilled management resources, and cosmopolitan life, these regions are attracting startups, leading them to set up operations in their neighbourhoods.

“Delhi-NCR (National Capital Region, which comprises Noida and Gurugram) is considered a gateway city for global corporates entering India, and accounts for almost 20 percent of the entire developed office stock in the country,” says Anshuman Magazine, CEO of real estate consultancy CBRE. “The proximity to an international airport and availability of quality, investment grade space led to occupiers closing large-sized deals in Gurugram. The office stock in the city has grown from 6 million sq ft in 2005 to about 60 million sq ft in 2018.”

Delhi-NCR is home to 13 unicorns, including Zomato and Oyo, and over 8,500 startups from Paytm and Snapdeal to Shopclues and Zomato. “Several startups have mushroomed in Delhi-NCR over the last decade because of its geographical and political advantage,” says Anuj Puri, chairman of Anarock, a real estate consultancy firm. “This factor inevitably attracts not only foreign investors but also early-stage funds. Also, by setting up base here, startups can associate with various government agencies which may help them accelerate their business further.”

Gurugram’s business appeal
Gurugram developed in the 1970s after Maruti Suzuki—India’s largest car maker—set up its base in the farming village, some 30 km from New Delhi. Today, the city is spread over 700 sq km, and is home to 1.5 million people and over 1,500 startups, making it one of India’s biggest startup hubs. It has top-notch hotels, skyscrapers, swanky residential and commercial buildings, and numerous breweries and restaurants. 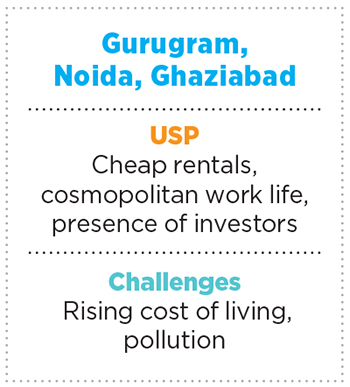 “I believe around 70 percent of all startups in the New Delhi region are in Gurugram,” says Deep Kalra, founder of India’s largest online travel company, MakeMyTrip. “Its proximity to the airport, presence of good schools, a large number of residential properties and culture that appeals to the young have made Gurugram appealing.”

Apart from being home to the likes of logistics startup Delhivery and renewable energy provider ReNew Power, Gurugram is also the India headquarters for global giants such as Uber, Facebook, Google and Airbnb. Now the Haryana government, which controls Gurugram, is planning India’s largest startup hub (along the lines of T-Hub in Hyderabad that will comprise incubators) in Gurugram, spread over 2.5 acres of land.

“From a business point of view, Gurugram makes absolute sense,” says Rajat Gandhi, founder of peer-to-peer lender, Faircent. “There is good senior management talent available… besides, access to the airport, MNCs and a distinct culture have made the city aspirational.”

Several co-working spaces like WeWork and 91springboard have also warmed up to Gurugram, offering a plethora of facilities at their centres. “The millennium city, Gurugram, is witnessing a surge in demand for co-working spaces, primarily due to the extensive industrialisation of the region, rising services sector, the presence of big corporate houses and MNCs, and metro connectivity. Besides, rising real estate costs are pushing many companies towards utilising co-working spaces,” says Puri. “The vast talent pool, think tanks and human ware in terms of investors are contributing to the growth of these startups.”

In Q1 2019, of the 11 million sq ft office space absorption in the top seven cities in India, almost 3.4 million sq ft of co-working space was leased in the top cities. Of this, NCR markets, including Gurugram and Noida, had nearly 12 percent share while Delhi saw no significant activity. 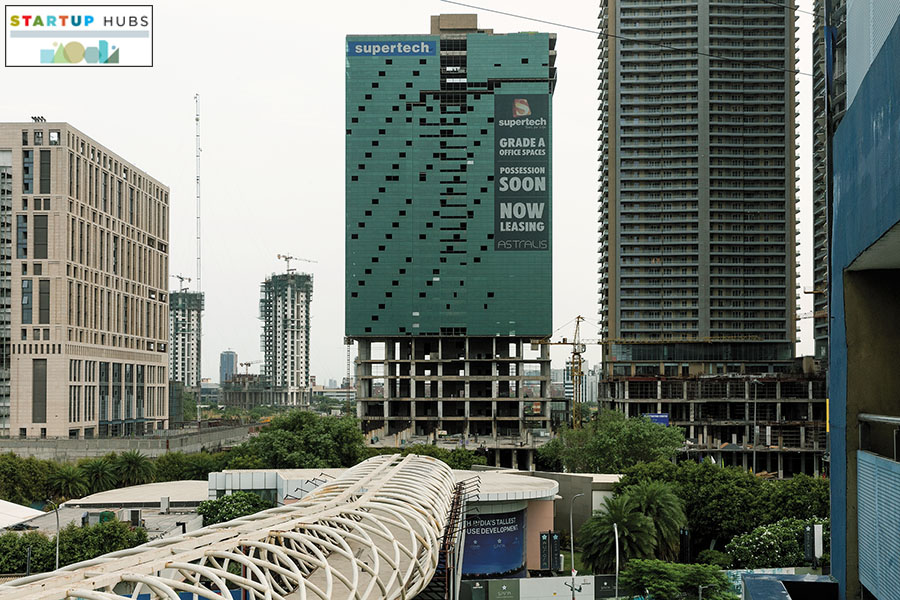 Commercial property is in demand in Delhi-NCR
Image: Madhu Kapparath

Noida: Ideal for manufacturing
Located in India’s most populated state, Uttar Pradesh, but close to New Delhi, the city of New Okhla Industrial Development Authority (Noida) was set up as an industrial hub in the late 1970s.

Noida boasts an international racing circuit, has wide roads and expressways apart from vast green spaces. The city is home to Paytm, one of India’s most prominent startups, has the headquarters of HCL, India’s third largest IT company, and houses offices and factories of companies such as InfoEdge and Samsung among others.

“Noida has seen its startup ecosystem multiply over the past few years,” says Mukul Rustagi, who runs ed-tech firm Classplus. “Good connectivity to Delhi, access to quality talent, low cost of operations compared to Delhi and Gurugram are factors that make Noida attractive for a startup.”

Noida is also known to be a low-cost manufacturing hub. “I think Noida could emerge as the hub for many manufacturing startups,” says Jatin Singh, founder of Skymet Weather, India’s first private weather forecaster, which operates out of Noida. “There is no dearth of senior management talent, good schools and infrastructure. Also, rentals in Noida are much lower than in Gurugram, and it has been a hub for manufacturing activities.”

Over the past few years, mobile phone manufacturers in the country, too, have been setting up their facilities in Noida. “If 100 mobiles are produced in India, Noida alone accounts for 65. This includes finished mobile phones and their accessories,” Uttar Pradesh deputy chief minister Dinesh Sharma, who is also the state’s information technology minister, said earlier this year.

Despite the benefits that Noida offers, there is scepticism about Uttar Pradesh’s political climate and poor cosmopolitan culture. “The political climate is a factor,” says Kumar. “There is much uncertainty as far as policies go. There are also other concerns such as those pertaining to freedom of speech, as the recent arrests of journalists suggest. All this can hinder Noida’s development as a startup hub as nobody wants to deal with uncertainties.”

Ghaziabad: Land of opportunity
Since the past few years, Ghaziabad, often referred to as the gateway to Uttar Pradesh, has emerged as a viable alternative to Gurugram and Noida as a startup hub. Although the city, which has abundant residential space, isn’t home to any unicorns, it has seen attention from founders looking at a cheaper cost of operations.

Much of that has to do with the availability of real estate, mainly old factories that have now been converted into office spaces. “There is real potential in Ghaziabad,” says Kumar of Swajal. “Several large spaces are being made available and that presents a huge opportunity to startups.”

Ghaziabad, which comprises several urban localities, including Vaishali, Vasundhara, Kaushambi, Mohan Nagar and Indirapuram, is a preferred neighbourhood for professionals working in the Delhi-NCR region because of its improved connectivity. The Ghaziabad Development Authority is also planning to develop a Cyber Hub, like the one in Gurugram that boasts office complexes and a food and beverage zone.

“Higher rental values and lack of floor space in Delhi are major factors deterring the growth of startups in the national capital,” says Puri of Anarock. “Most startups scout for bigger spaces in Gurugram, Noida and Ghaziabad that have lower rents and enjoy easy access to key government offices and top talent from institutes such as IIT-Delhi and Delhi College of Engineering.”

Despite the infrastructure and luxurious lifestyle a region may offer, a bigger concern for companies, and especially expats, is the high pollution levels in New Delhi. The capital is one of India’s most polluted cities with the deadly PM (particulate matter) 2.5 mark often crossing severe levels, forcing the government to often announce the shutdown of schools during winter.

“High pollution in the city is proving to be a dampener for a few startups that are moving their operations outside to other cities in the south,” says Puri.

Tweets by @forbesindia
Indigo: Will bickering friends bring down what they built?
Augmented reality is changing how blue collar workers are trained, one headset at a time