Droom: Stepping on the gas

Droom, an online marketplace for used and new vehicles, is the first to attract investments from Toyota in India 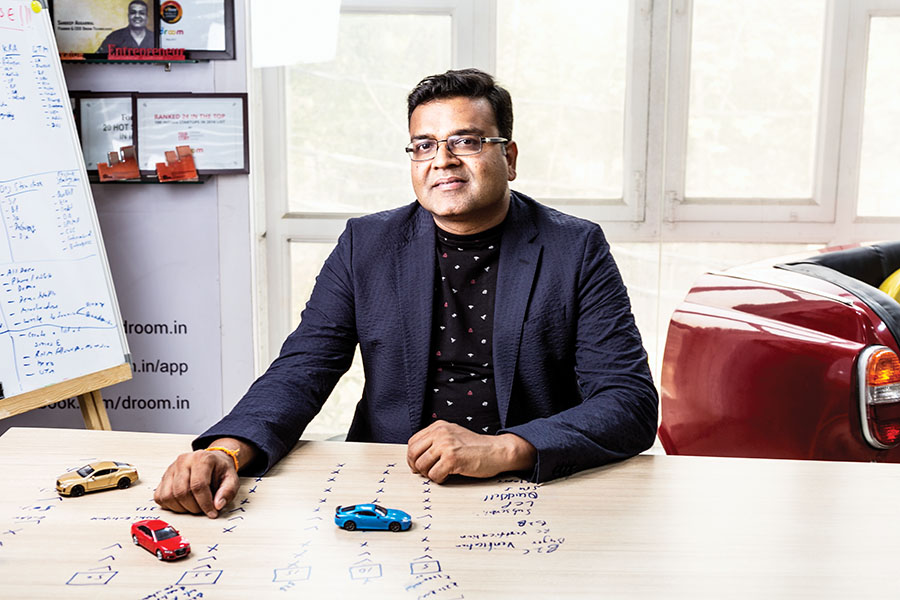 Sandeep Aggarwal says he is an entrepreneur at heart
Image: Madhu Kapparath

Sandeep Aggarwal certainly knows a thing or two about building million-dollar companies.
After all, at 45, not many entrepreneurs can boast of having built one successful startup—a company worth over $1 billion—before leaving it to build another. Aggarwal is the co-founder of ShopClues, India’s fifth unicorn, and Droom Technologies, which, in recent times, has become a darling among investors.

This May, the Gurugram-headquartered Droom, raised $30 million in an investment round led by the world’s second-largest automobile manufacturer, Toyota, and Tokyo-based venture capital investor Digital Garage, which values the three-year-old venture between $550 million and $700 million. The investment by Toyota is the first such in India by the Japanese carmaker. 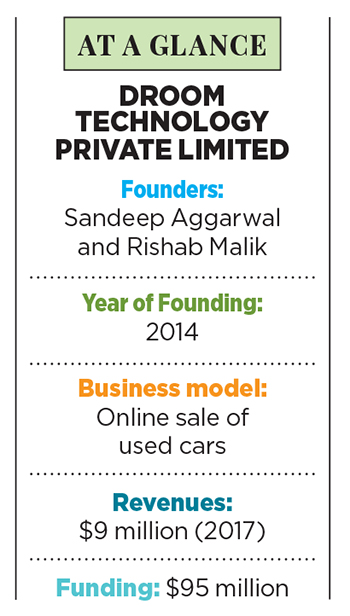 “We were impressed that Droom has rapidly established its position as the largest online marketplace to buy and sell automobiles in India,” Toyota said at the time of investment. “Droom and we share the same vision, which is bringing trust and transparency to the transactions of automobiles.”

In all, Droom—an online platform that connects sellers and buyers of used cars, new vehicles, motorcycles, and even aircraft—has raised $95 million from investors, including Lightbox, Beenos, and Beenext. So far, the company has reportedly generated close to $700 million in gross revenue and $15 million in net revenue, and claims to connect over 2.5 lakh auto dealers in more than 500 cities across India.

Along with co-founder Rishab Malik, Aggarwal started Droom in 2014 to fix the problem of trust in the online used-car business. “I realised that India was the third-largest automobile market in the world, and only 4 percent of Indian households had a car, and 24 percent had a motorcycle,” says Aggarwal, CEO of Droom. “Since Henry Ford founded the assembly line for car-making, cars have advanced. But buying and selling of cars remain antiquated. Given that the life of a car can now be 12 to 18 years, and the average duration of one ownership is only three to five years, the vehicle will change hands three to four times. But it is a horrible experience buying or selling them in India.”

Aggarwal’s entrepreneurial journey began with ShopClues, an online marketplace that rivals Amazon and Flipkart. Aggarwal had founded the company with his wife Radhika Aggarwal, and Sanjay Sethi in 2010.

By 2014, the company grew into a unicorn, but Aggarwal had to step down from active operations in the same year after allegations of insider trading were levelled against him from his tenure at Collins Stewart Wealth Management in the US, much before he began ShopClues. Aggarwal was accused of divulging confidential details of the Microsoft-Yahoo negotiations in 2009. As the court proceedings began, he stepped away from ShopClues in an attempt to safeguard the company’s reputation.

“I am an entrepreneur at heart,” says Aggarwal. “In my previous venture, my circumstances forced me to be away from it, and I was not sure when I would return. I reached a stage where instead of going back, I realised I could create another venture.”

Aggarwal went back to the drawing board and chalked out 52 ideas for a startup, which were eventually whittled down to two. Apart from Droom, he toyed with the idea of a mobile wallet, but realised that he was late into the game, especially since Paytm had begun to expand rapidly. And although there already existed online players such as ZigWheels, CarDekho and CarTrade in the second-hand automobile segment, Aggarwal says, “When we started out, our competitors were only in the business of [product] discovery. We wanted to go one step further and create a marketplace.”

That’s how Droom came about. It also helped that Droom met three of Aggarwal’s most important criteria while starting out. “So with my knowledge so far, I gravitate towards three things,” he says. “Technology has to be at the centre of everything, the product has to be scalable, and must have a high gross margin. I saw the opportunity here.”

Used-car purchases in India mainly have four issues, primarily with regards to the condition of the vehicle, price, documentation, and trust in the seller, says Deepesh Rathore, co-founder of Gurugram-based automotive consultancy Emerging Markets Automotive Advisors (EMMAAA). “Trust is the single biggest issue,” he says.

With 85 percent of Aggarwal’s business coming from used automobiles, his team and he knew that building trust was key to success. “Used-car dealers are infamous for being aggressive people,” he says. “Unlike the US, Europe, and Japan, India is a low-trust market. Here, people don’t inherently trust each other. Eighty-five percent of vehicles sold in this country had a tampered odometer.”

The Droom team built four different products that could address the trust issue: Eco, an inspection tool that checks a vehicle on 121 checkpoints before it is certified by a technician; an Orange Book Value (similar to the Kelley Blue Book in the US) that uses algorithms to find the fair price of a vehicle based on its make, model, insurance, ownership and condition; the company rates sellers so that buyers are more informed; and offers a thorough history of the vehicles, based on details from companies, insurance providers, and the police—titled Droom history, it has data of over 200 million vehicles from over 1,000 road transport offices in India.

“There is a lot of deep learning involved in it [Orange Book Value],” Aggarwal says. “We built thousands of depreciation curves. For instance, human knowledge says a three-year-old Toyota depreciates less than a three-year-old BMW. Or a car from New Delhi may sell 8 to 10 percent cheaper than a car from Bengaluru or Chandigarh. We have thousands of such curves that can solve that.”

“Even then, I am not certain how it works,” says Rathore of EMMAAA. “If one person says he has 100 checkpoints, another will says they have 150 checkpoints. Also, in India, unlike the UK, we don’t have the ministry of transport tests that are annual tests of vehicle safety, roadworthiness, and other aspects. And since government data isn’t available, fudging data or the condition of an automobile by a seller can be easy. Addressing that is a tough problem in India.” Reflecting Rathore’s comments is the fact that CarTrade claims it uses 139 checkpoints; CarDekho claims to have 217 checkpoints.

The commission varies between 2 percent and 2.5 percent for used cars, and 2.5 percent and 3 percent for used motorcycles; for new it is 1 to 1.25 percent, or a flat booking fee. Fifteen percent of the revenues come from subscriptions of dealers who pay between ₹45,000 and ₹1 lakh. Droom also provides comprehensive reports on a vehicle to buyers for up to ₹100. “Ninety-two percent of the used car business is from B2C, 7 percent from C2C, and the rest is B2B,” says Aggarwal. “In the next three years, we expect C2C to be almost 40 percent.”

Droom claims to connect over 2.5 lakh auto dealers in more than 500 cities across India

India’s automobile industry is worth $225 billion, says Aggarwal. Of this, $60 billion is in the ancillary services such as warranty, insurance, and services, while the remaining $160 billion is split between new vehicles and used automobiles. “For every new car sold, 1.5 used cars are sold, and for every new motorcycle, 1.8 used motorcycles are sold,” he says.

“Of the $225 billion, $1 billion is enabled through online transactional platforms, and we own 70 percent of that,” Aggarwal says. “We expect the market to come online faster. In a country where organised retail across sectors is only 8 to 10 percent, cost of capital is 12 to 16 percent, and retail space isn’t there in tier 2 and tier 3 cities, ecommerce is the way.”

Droom is also looking to replicate its success in the international market. “We signed an MoU with Toyota, “Aggarwal says, “under which we will expand to nine countries, where we will bring our digital assets and Toyota will bring its physical presence, inventory, and dealer network to help us jumpstart. Droom will expand in Singapore, Indonesia, Malaysia, Philippines, Vietnam, Thailand, Cambodia, Myanmar and Laos over the next year.”

What about competition from other online players, particularly from certified used car companies such as Mahindra First Choice? “They don’t have a benchmark in pricing. The vehicle sold by organised players are 20 percent more expensive than a mom-and-pop dealer,” says Aggarwal. “But a mom-and-pop dealer may be able to source a vehicle faster, and for cheaper. Our tools and technology make them partners. That’s what we are bringing to the table.”

Tweets by @forbesindia
Saama Capital: Not swayed by seasonal flavours
Taste Test: Anticipating client preferences before they do