Antler is nudging aspiring founders to live their business dream. Will its 'day zero' investment strategy keep paying off? 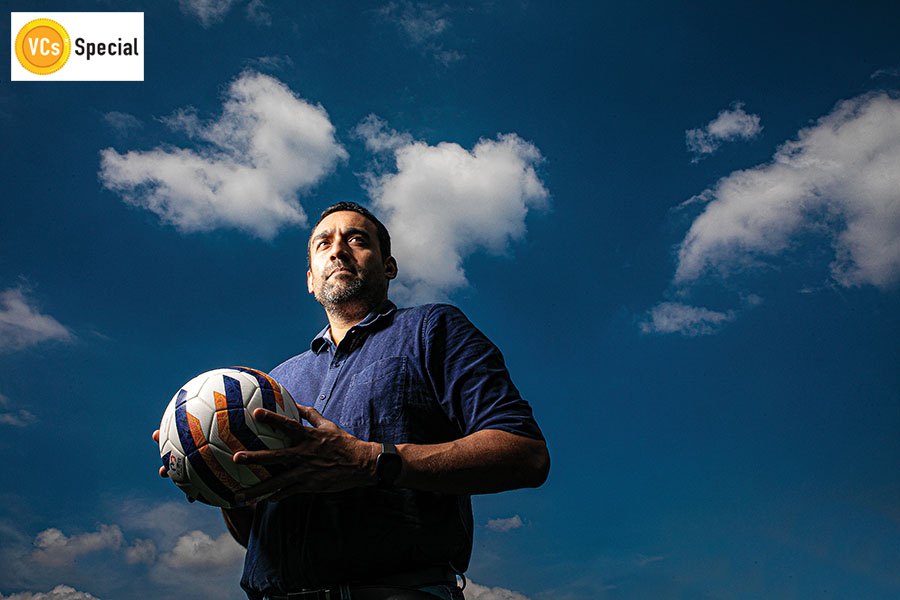 Bengaluru, July, 2022. As a climate consultant, Hitesh Bhuraria knew that the outlook was bright and sunny. Working with Bain & Company for five years, the INSEAD alum figured out that corporates were grappling to address carbon emission challenges. For months, Bhuraria worked on understanding the market landscape, mapped existing solutions and uncovered the whitespaces. He realised that there was a massive opportunity in leveraging technology to uncover deeper insights into how companies can be decarbonised. The wannabe entrepreneur has been itching to take the plunge.

What dampened Bhuraria’s fire was his futile hunt for a tech co-founder. He spoke to dozens of engineers, found a few potential matches with the right technical skills but most of them either lacked the founder mindset or sounded non-committal. Meanwhile, Nishant Singh was also in a state of entrepreneurship limbo for a while.

Passionate about climate, the software engineer at Google had been tinkering with ideas and people he could work with, but struggled to find the right partner.

Orthopaedic surgeon Karan Raj Jaggi too was wresting to find a cure for his entrepreneurship itch. Coming from a family of doctors—Jaggi was the third generation in the profession—he always yearned for ‘high impact and high scale’. A medical practice had high impact but hospitals were a low-scale space to be in. The doctor failed terribly in his balancing act: A full-time job and trying to roll out a startup. One of the main reasons, Jaggi diagnosed, for failed ‘Operation Startup’ was his ‘can do everything on my own’ approach. It sadly didn’t work and Jaggi now started scouting for a partner.

Fast forward to October. Bhuraria and Singh have co-founded Sangti, a SaaS-enabled carbon management platform that helps with carbon measurement, management, and climate financing. Meanwhile, Jaggi found his co-founders in Shubham Jain (a former software engineer at Intuit,) and Vedant Jain (ex-assistant vice president at Noon). The trio rolled out Guardians, India’s first full-stack medical emergency response platform. “From not knowing Vedant and Shubham to chalking out a five-year plan for Guardians, it has been the most exhilarating ride of my life,” says Jaggi, adding how spotting a LinkedIn post about the Antler India Residency programme helped in starting his entrepreneurial journey. “Their approach of engineered serendipity in finding exceptionally gifted, motivated and ambitious folks was sheer magic,” he reckons. 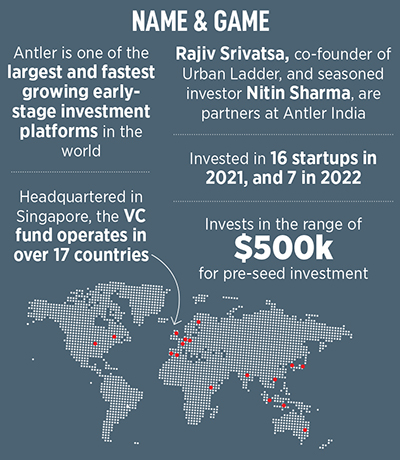 An exclusive platform for aspiring entrepreneurs, Residency is a 14-week programme run by Antler, one of the largest and fastest growing early-stage global investment platforms headquartered in Singapore. With an acceptance rate of less than 3 percent, the programme plays matchmaker in finding a co-founder, hones the business idea, provides support with customer validation and building a minimum viable product (MVP) and go-to-market strategy, and invests $270,000 for a 9 percent equity in pre-seed stage startups that make the cut.

Rajiv Srivatsa, partner at Antler India, explains why the VC fund takes pride in playing matchmaker. “Even for a Steve Jobs, there was a Steve Wozniak. For Larry Page, there was Sergey Brin,” says the entrepreneur-turned-VC who co-founded online furniture startup Urban Ladder in 2012. Srivatsa traces the origin of matchmaking to Antler’s genesis. “It started as a matchmaking company,” he says, adding that Antler has invested in around 400 startups through the Residency route. “So we have a lot of history there.”

But why was the programme not rolled out in India before? Srivatsa gives three reasons. First, Residency requires maturity of the audiences—aka budding entrepreneurs—to want to work as a co-founder with someone they don’t know at all. In spite of a flourishing startup ecosystem in India over the last decade, the concept of co-founding a venture with an unknown partner was still largely missing. Second, for a concept like Residency to work, a crucial ingredient is physical interaction and a spate of meetings. The last two years, Covid ruled out any practical chance of rolling out such a programme.

Third, one also needs some time to figure out the nuances of the programme and how to make it work in India. “So one had to do a lot of reengineering to ensure that the programme works in India,” says Srivatsa, adding that Residency is a first-of-its-kind platform by any VC fund in India to foster entrepreneurship at the earliest stages by bringing together aspiring founders. “Antler is shaking up the traditional early-stage model of investment by using global platforms,” he says. The fund, Srivatsa underlines, fills two critical gaps in the expanding startup ecosystem. First, it is a rare global institutional VC firm focussed on the pre-seed stage in India, he contends. Second, Antler serves founders at the earliest stages with a platform that allows investments in entrepreneurs’ pre-team and, in many cases, even pre-idea.

Meanwhile for budding founders, fixing partners at Residency was not easy. Bhuraria and Singh—who had to undergo an array of activities, some especially designed to create high-stress environments—recount their experience. The duo spent time outside of the cohort on personal activities to deepen their relationship. To dive deeper into the non-obvious facets of a co-founder relationship, targeted interventions such as retreats and probing questionnaires simulated conflicts and hard discussions, which otherwise would have surfaced ad-hoc over months or years of them working together. The questions ranged from, ‘What if your co-founder stops enjoying building the venture with you?’, ‘What if you have to fire your co-founder?’, to ‘What if your co-founder doesn’t want to make this a billion-dollar outcome?’.

Finding a partner is just the beginning of the journey. Post teaming up, Bhuraria and Singh had to articulate and execute their go-to-market, and used the Antler team as a sounding board to narrow down on the logistics sector. The co-founders, says Srivatsa, are using tech to uncover insights into how companies can look at decarbonisation. The SaaS-enabled platform is working with three of the largest logistics players in India to help them achieve their decarbonisation goals, he adds. “A founder’s journey is not easy. Having a co-founder helps a lot in cushioning the bumpy ride,” he underlines. 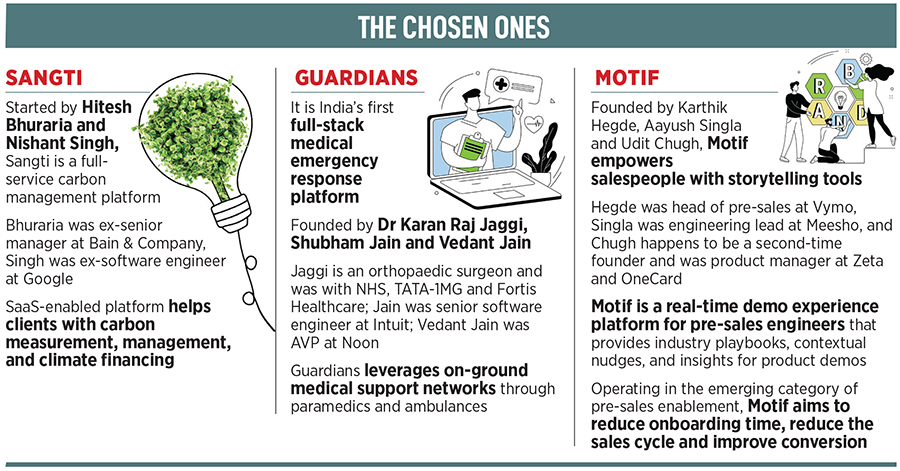 Having the right set of co-founders is now what even the doctor prescribes. Jaggi explains. The academic prowess—his partners are from IIMs—played a small role in forming a team. One of the main reasons, he underlines, to come together was the common desire to roll up their sleeves and get their hands dirty. “Essentially, we were a team even before we realised it ourselves,” he says. The next goal was to build an MVP and get sales validation via pre-orders. “One month, 16-hour workdays, hundreds of ‘quick connects’ and 30 daily standups later, our MVP was born,” he adds.

The challenge for the co-founders now is to realise that they are still at ground zero. Having a partner, building an MVP and hitting the market is just the start of the journey. Jaggi knows the challenges. The doctor, though, prefers to talk about the positive side. Accidents can happen any time, he says. “But if you have your helmet strapped, then the possibility of not dying would be too high,” he says with a smile. In a ruthless startup world, where over 90 percent of the ventures are destined to die, having the right partner gives the gritty founders a narrow window of 10 percent to make it big.

Tweets by @forbesindia
On the way to climate hell: Will COP27 negotiations enforce climate action commitments?
On the move: Hermès and the history of motion