ConveGenius was launched to reach 100 million school students at the bottom of the socio-economic pyramid, and in 2020 teaching through Whatsapp helped it grow 15X 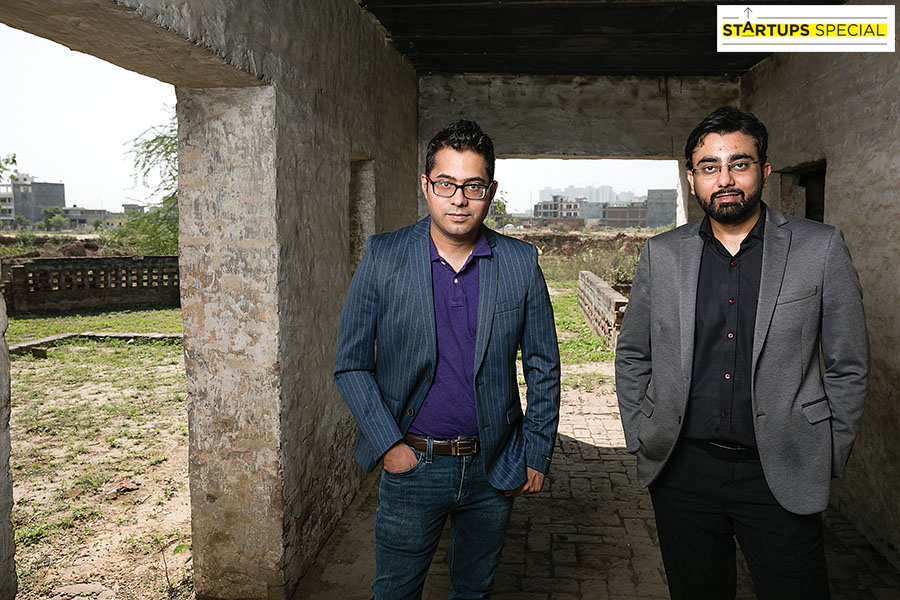 In 2014, after three years of corporate life, Jairaj Bhattacharya and Shashank Pandey decided to hang up their boots and turn entrepreneurs. While Pandey worked with Bank of America in Hyderabad, Bhattacharya was with Nanyang Technological University in Singapore. The duo started an edtech venture to reach out to the 100 million school students at the bottom of the socio-economic pyramid. Most of the edtech players, the duo reasoned, were catering to the rich and affluent across the cities. “Education should not be only for the rich kids,” says Bhattacharya.

The friends from IIIT Hyderabad started ConveGenius in 2014. If education, Pandey thought, had to reach out to the masses, then it should be free. There were precedents in terms of enterprises reaching massive scale and not charging a penny. Take, for instance, Google search, Google maps, and WhatsApp. “So ConveGenius would offer free education,” the duo decided.

There was a problem, though. They were marrying business with impact. But the venture still needed to be viable. So they figured a business-to-business revenue model. The founders tied up with government schools, low-cost private schools, corporates, after-school learning centres and NGOs across a dozen states and offered tablet-based learning solutions. The pace of growth was slow, and the impact was not what the duo had envisioned. In six years, ConveGenius managed to reach out to half a million students. 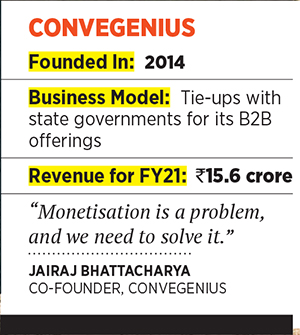 Then came the pandemic in 2020. Schools shut down from March, and ConveGenius came to a screeching halt. As education went online with kids logging in from smartphones or computers, the duo scrambled for a solution. The socio-economic strata they dealt with in rural India meant that most of the families had only one smartphone.

The ConveGenius team went back to the drawing board, and in three months came up with a solution. “We decided to impart education through WhatsApp,” recalls Bhattacharya. There was scepticism; critics found the move amusing. ‘Who would study on WhatsApp even if it’s free’ was the wide reaction. On June 1, ConveGenius started the pilot, and within minutes WhatsApp crashed. Reason: Heavy traffic. Over 50,000 kids came online. “We were not prepared for such huge numbers,” recounts Pandey. Once the technical glitch was fixed over the next few weeks, students started trickling in.

Cut to May 2021. In almost a year, ConveGenius boasts of 15 million students. To put the numbers in perspective, the startup managed to garner just half a million students in six years since 2014. Now it had added 14.5 million in just a year! The WhatsApp idea did wonders for the co-founders who finally managed to ramp up scale, and impact. ConveGenius, which offers over 20 subject curriculums in 10 languages, is now planning to spread its wings across India. 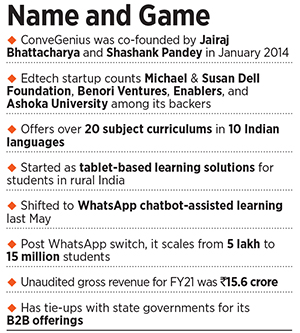 If ConveGenius has to achieve the target of educating 100 million kids, then it has to have a pan-India presence. But there’s still the matter of monetisation. Bhattacharya is aware of the challenge. “Monetisation is a problem, and we need to solve it,” he says. For any enterprise, he explains, the big challenge is scale. This is what people crave for. “Facebook makes money through advertisements,” he says. ConveGenius, he lets on, will figure out a way to make money. It could either be cross-selling services and financial products, or minimal advertisements or sponsored content. The startup can even integrate its content with any popular app and offer sachet pricing to the rural population. “Even `10 a month will ensure that we post a profit,” he claims.

The co-founders, though, are not too bogged down with monetisation. What they want now is to make the most of the Covid tailwind in democratising education. “Over the next five years, ConveGenius will become the default education delivery platform for students in Bharat,” says Pandey. Students might even use us for educational loans and scholarships.

After aggressively scaling up the venture over the last year, ConveGenius might make more sense to conventional venture capitalists, and not just impact investors. For the passionate co-founders, the business and the mission always made sense. “We will keep it free and build a monetisation model around it,” is Pandey’s promise.