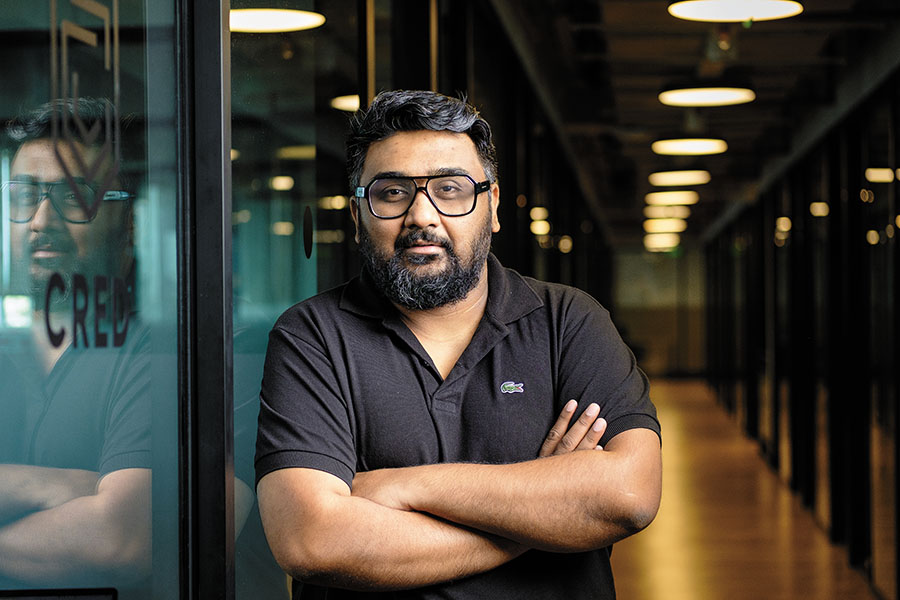 Cred founder Kunal Shah wants to focus on the ones who pay taxes as nobody has been solving their problems
Image: Nishant Ratnakar for Forbes India

For a little over a year, Kunal Shah has been busy building a community. And he is crystal clear about the niche community he is building. “For too long, startups and governments have focussed on the masses,” the 40-year-old founder of Cred, a members-only credit card payments app, says. “We want to focus on the others, the ones who pay taxes. Nobody has been solving their problems.” The Bengaluru-headquartered company offers an app through which members can make credit card payments. All the credit cards that an individual owns can be linked to the app and the company sends reminders for the payments ahead of the due date. It also simplifies the charges on the credit cards, making it easy for users to identify hidden charges.

“We empower members with visibility into their credit cards, helping them avoid the debt trap and use the credit they have earned in a responsible manner,” says Shah. “For example, just last month we found Rs 21.73 crore in hidden charges for our members, who can now easily see what they are incurring on rather than having to pore through the fine print on their statements.” Members are also given rewards such as vouchers at over 1,000 retail outlets such as Levi’s or Gap or online stores such as Amazon and Flipkart, as well as offers on Zomato and Cult. For every rupee paid towards credit card payments, members are rewarded with Cred coins which can be used to purchase vouchers. “If you look at history, nobody has been rewarded for paying back on time,” Shah says. “We want to fix that.” Since Shah founded Cred last November, the company has signed up a million users. There are “hundreds of thousands” of individuals seeking membership, but the conversion rate is between 30 percent and 40 percent. This is because people need to have a credit score upwards of 750, often calculated by third parties, before being granted membership. “We are trying to build a community of trustworthy individuals with the best financial behaviour, and shaping a society that is credit-worthy,” says Shah, who had earlier founded FreeCharge, a digital payments company that he later sold off to Snapdeal in a deal worth Rs 2,800 crore. “We have seen many people who go back to fixing their credit score and then come back to join Cred,” he says. The company uses minimal human interference when it comes to approving profiles for the membership. “People call me and ask to approve their membership requests,” says Shah. “But that’s not in my control. Until the credit score matches the requirement, it won’t give membership.” For now, credit scores are calculated by rating agencies CRIF and Experian. The Trust Factor
This is just the start. “We could even offer personal loans at cheaper interest rates since you know the customer has a high credit score and is trustworthy,” Shah says. “That’s just one of the things we can do with the platform.” The loans could either be through financial institutions or even on a peer-to-peer lending basis. With Cred, Shah envisages that members will be able to engage in peer-to-peer lending, primarily because of the trust factor, as well as bring together those individuals who could even offer classified services such as renting apartments with minimal deposit amount since they are already creditworthy individuals. At the core of it all is Shah’s strong belief, based on Nobel laureate economist Kenneth Arrow’s theory that economic prosperity will be higher in any society that exhibits higher levels of trust. “In low-trust economies, according to Kenneth Arrow, the trust deficit slows down transactions and makes it hard to be prosperous since people need to take additional steps to protect themselves,” says Shah. “Examples of this are preference for demand drafts over cheque, 10-month deposits on rental versus one month, cash on delivery on ecommerce instead of paying upfront. Low trust typically emerges from inefficient judiciary or law enforcement which makes people extra cautious.” While individuals get rewards, for brands and companies Cred will provide a captive audience that is financially prudent and trustworthy. Cred, on the other hand, will be able to monetise through transaction fees levied on companies and brands for using its platform for products, as well as perhaps charge a command fee for access to its members. “Brands value the high-trust member base of Cred, offering exclusive benefits and offerings for them while institutions can craft attractive and unique products since the Cred audience is low-risk, authentic and tends to understand financial products,” says Shah.  Growth Curve
Shah’s venture has raked up a valuation of $450 million within just one year after the company closed a $120 million funding round earlier this year, led by existing backers Ribbit Capital, Gemini Investments, a personal investment vehicle of Yuri Milner’s DST Global, and Sequoia Capital. “In India, the community of the top 1-2 percent of the population is quite fragmented and Kunal is trying to bring them together with some curated experiences and services,” explains Amrish Rau, PayU India’s former CEO and an angel investor in Cred. “Cred has built a high-trust community. For instance, if Tesla wants to launch in India, instead of going to showrooms across the country, the platform offers a community that has the potential to become possible buyers.” Cred is also gearing up to at least acquire half of the credit card users in the country next year. India currently has over 47 million credit card users, spending a combined $8.5 billion a month. Credit card usage has grown from 18 million to 47 million cards in four years, says Shah. The company is also expanding its range of offerings as well as laying out plans to foray into global markets. Already, it offers services such as masterclasses with top chefs such as Sarah Todd and Diana Chen, and VIP inclusions at social events such as music festivals and city experiences. Then there are social causes where the coins are used for things such as building playgrounds in cities. “While we are actively evaluating different markets, including those in Asia, it’s too early to say where and when, but the data points to a need for Cred in low-trust markets where people hold multiple cards,” says Shah.