Announcing a tele-programme is not enough, India must take a more holistic view of mental health

In a country where nearly 80 percent of people suffering from mental health issues do not receive treatment, it is important to focus on strengthening availability of skilled professionals and improving grassroots access to services beyond urban areas 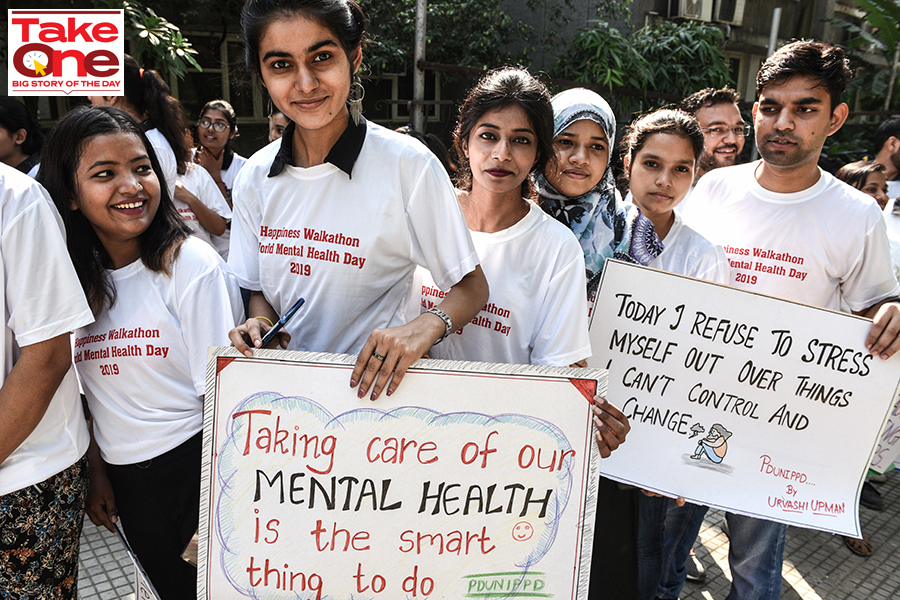 On February 9, in a written reply to the Rajya Sabha, Nityanand Rai, Union minister of state for home affairs, said that 3,548 people had died by suicide due to unemployment in 2020.

He was quoting data from the National Crime Records Bureau (NCRB), which further suggested that during the same year, in the wake of the Covid-19 pandemic, 5,213 people had died by suicide due to indebtedness and bankruptcy. In all, more than 25,000 people in India had died by suicide either due to unemployment or indebtedness between 2018 and 2020.

A few days ago in her Union Budget speech on February 1, Finance Minister Nirmala Sitharaman had announced the launch of a national tele-mental health programme, in order to provide better access to mental health counseling and care services. “The pandemic has accentuated mental health problems in people of all ages,” Sitharaman said, explaining the government’s intention to build a network of 23 tele-centres, with the National Institute of Mental Health and Neurosciences (Nimhans) in Bengaluru being the nodal centre, and the International Institute of Information Technology-Bangalore (IIITB) providing technology support. More details on the allocation for this tele-mental health programme and implementation strategy are yet to be announced.

While experts call the Budget announcement a step in the right direction, they also point to critical issues like low funding, under-utilisation of available funds, lack of skilled professionals, and other access and infrastructure issues that need to be addressed on priority first if a programme of this nature has to be implemented.

“The government’s rhetoric is not matched by action,” Dr Soumitra Pathare, consultant psychiatrist and director of the Centre for Mental Health Law and Policy, tells Forbes India. He points to the lack of equity in distribution of funding toward mental health in the Budget. Out of the Rs83,000 crore outlay to the Department of Health and Family Welfare for FY23, only 0.8 percent, or close to Rs670 crore, is allocated to mental health. Out of this, Rs560 crore is set aside for one institution—Nimhans—and the allocation has increased from Rs528 crore last year. The Lokpriya Gopinath Bordoloi Regional Institute of Mental Health, Tezpur, gets Rs70 crore, up from Rs67 crore last year. 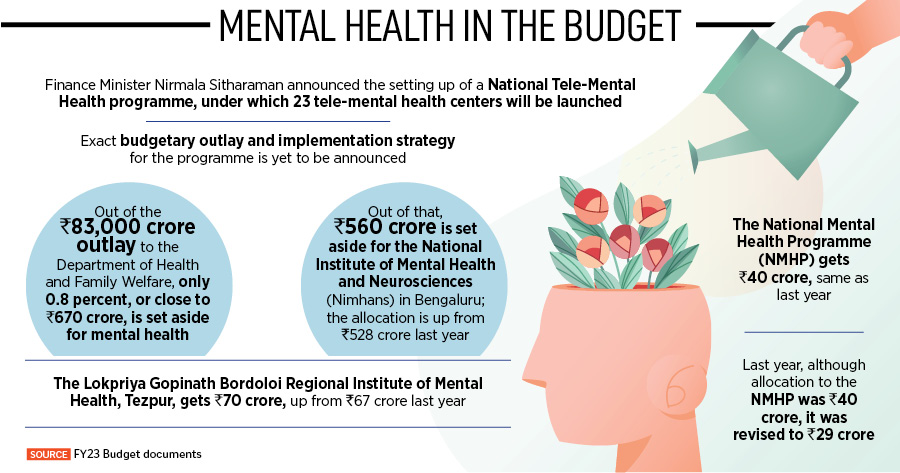 The flagship National Mental Health Programme (NMHP), which does the heavy lifting for bridging access gaps and promoting responsive mental health care, among other things, gets Rs40 crore, same as last year. Though the budgeted allocation was Rs40 crore last year, it was later revised to Rs29 crore.

A parliamentary standing committee, in a March 2021 report, expressed deep concern over the disturbing trend of dwindling allocation and woeful under-utilisation of funds in the NMHP over the last few years. The committee observed that the budgeted estimate of Rs50 crore for the NMHP in FY19 reduced to Rs40 crore each in FY20 and FY21. The actual expenditure in these three years, however, stood at a low Rs2.01 crore, Rs2.51 crore and Rs9.07 crore respectively.

“The Committee is of the view that a constant under-utilisation over the years under this head clearly points towards the [health] ministry’s inability to comprehend the magnitude of mental health burden in the country,” the report says. “Various studies have highlighted the high prevalence of mental illness in the country but no substantial progress has been achieved to facilitate a robust mechanism for delivery of mental healthcare services.”

The National Mental Health Survey conducted by Nimhans in 2016 found that while nearly 150 million Indians need mental health care, close to 80 percent, or about 120 million people, are not getting any help. Depression, anxiety and substance abuse disorders affect 1 in 20 Indians, and the treatment gap for depression is 88 percent. In October 2021, a global study published in The Lancet stated that depressive and anxiety disorders in India have increased by 35 percent each due to the Covid-19 pandemic.

Apart from shortage of skilled professionals, the distribution of these experts is disproportionate across the country, says Dr Kamna Chhibber, head, mental health department, mental health and behavioral sciences, Fortis Healthcare. “Urban areas have a huge concentration of experts while rural areas do not have any. This is not a problem that will get fixed today or tomorrow, because you need a huge impetus to create more training programmes across specialisations within mental health, which will take a decade or even more.”

Herein lies one of the biggest challenges for the implementation of the national tele-mental health programme proposed by the government. “The myth that technology can solve every problem is not going to go away. But to run the tele-mental health programme across 23 centres, you require a specialist on the other end of the line. If you do not have your specialist, how are you going to run the programme? You ultimately have to increase the total pool of people available, and you are not addressing that at all,” says Dr Pathare.

The parliamentary standing committee report also notes that even though the District Mental Health Programme (DMHP) is operational in hundreds of districts, “the system is not well-established and gaps exist in the delivery of care at the ground level”. Many states have not yet framed the State Mental Health Rules and Regulations, which is also why this programme has not been operationalised through the country, the report states. “Needless to say, the Covid-19 pandemic has taken its toll on the continuity of care of patients suffering from mental illness.”

Dr Pathare points out that the government gives up to a maximum of Rs83 lakh per district under the DMHP. “An average district is about 1.5-2 million people in size. Even if you assume the government gives the maximum amount of Rs83 lakh to every district, it is still insufficient,” he says, adding that the amount of money allocated to Nimhans alone (Rs560 crore) is equivalent to the money that all these districts collectively get under the DMHP. “If the tele-mental health programme was one component of a larger programme in which you also had feet on the ground to the requirements of the DMHP, then it makes sense, but a tele-mental health programme without any of that is not going to help much,” he says.

Dr Chhibber suggests training professionals like general practitioners, anganwadi or Accredited Social Health Activists (ASHAs) to help with easy identification of people in need of mental health interventions and help address the problem of access. “We can train them to provide a support mechanism, whereby now that a tele-health system has been announced, they can use that to connect people in their respective areas with experts in cities as and when needed.”

Less than four in ten (38 percent) households across India are digitally literate. In rural areas, this proportion is lower, at 25 percent, according to a March 2021 analysis by Venugopal Mothkoor and Fatima Mumtaz of the government think-tank Niti Aayog. In order to address the challenge of digital literacy, Dr Chhibber explains, it is important to keep the system simplified and hassle-free.

Protecting the privacy of people who seek help through a digital health ecosystem also needs to be a priority, both for mental health and otherwise. Meena Ganesh, MD, co-founder and chairperson of home health care company Portea Medical had told Forbes India post the Budget announcement that the consent framework the finance minister mentioned in her speech will be the most fundamental building block of this digital ecosystem. “For the first time, we are looking at patients owning their data, rather than hospitals and health care workers owning patients’ health records. For the first time, we are saying the patients will have control in terms of tracking and sharing their record, as and when they think it is appropriate.”

Implementing a strong strategy to address mental health issues must focus on four key aspects, according to Mahesh Chandran, CEO, White Swan Foundation, a non-profit working in the mental health space: Accessibility, affordability, defining the quality of services, and addressing the social constructs that become a challenge for people to seek help. “Getting various stakeholders in the ecosystem to play their part is equally important,” he says.

While Dr Chhibber suggests a public-private partnership to diversify the reach of the tele-mental health programme once it is implemented, Dr Pathare points to tackling the social determinants of mental health, like poverty, abuse etc., particularly for the most vulnerable and marginalised. “Mental health is not, in that sense, like physical health. It is largely determined by psycho-social factors. To take a narrow medical or diagnostic view without addressing the social factors that influence mental health will only be a drop in the ocean and cannot do much to solve problems.”