Micro-blogging platform clarifies it hasn't taken any action on accounts from the media, activists and politicians 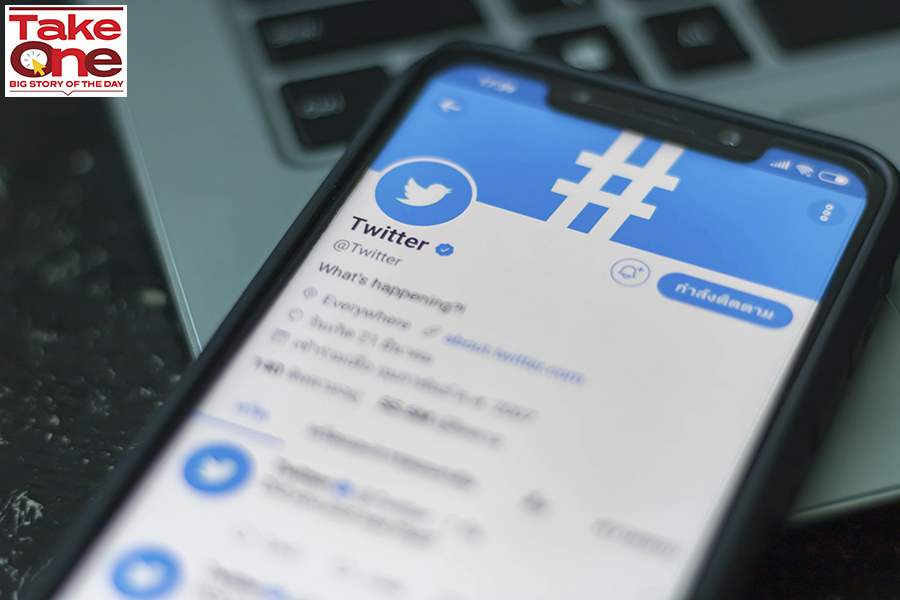 Following 10 days of back and forth between Twitter and the Ministry of Electronics and Information Technology (MeitY), the social media platform on Wednesday categorically said that while it has withheld a portion of the accounts identified in the Section 69A blocking orders in India, “we have not taken any action on accounts that consist of news media entities, journalists, activists, and politicians”.  Since January 31, the MeitY has served Twitter with an unspecified number of Section 69A blocking orders. Twitter specified on Wednesday that two of these were emergency blocking orders with which the platform “temporarily complied but subsequently restored access to the content in a manner that we believe was consistent with Indian law”.

The first of these orders was issued on January 31 and directed Twitter to block 257 URLs and one hashtag. Twitter, however, took action only on February 1, and also restored access on the same day. Before that, it had met the Section 69A blocking committee wherein it argued that the content was “free speech” and “newsworthy” and hence should not be taken down, The Indian Express reported.

From the non-compliance notice that MeitY subsequently sent to Twitter on February 2, which was first reported by The Indian Express, it is clear that the emergency orders were issued in relation to the hashtag ‘#ModiPlanningFarmerGenocide’. The 18-page notice said the “impracticability or the disproportionality” of blocking the hashtag could not be decided by Twitter. “[T]he content attached to the said hashtag had been found to be directly falling afoul of Section 69A of the IT Act. In this regard, it is necessary to point out to the stated irrationality of Twitter conducting a purported constitutional balancing act in the absence of any legal mandate,” the notice read.  From The Indian Express report and Twitter’s latest statement, it is also clear that the accounts of news magazine The Caravan, Kisan Ekta Morcha, Bharti Kisan Union (Ekta) (Ugrahan), Tractor2twitr, jatt_junction, Prasar Bharti CEO Sashi Shekhar Vempati, activist Hansraj Meena, actor Sushant Singh, Aam Aadmi Party MLA Jarnail Singh and CPM leader Mohammad Salim were all blocked under the emergency provisions of Section 69A, through which the designated officer can advise the IT secretary to pass an interim measure. The blocking committee must be convened within 48 hours of the passage of the interim order to give their recommendations after which the IT secretary can either confirm or revoke it.  Most of these accounts have been supportive of the farmers’ agitation against the controversial Farm Acts. Twitter refused to comment on the identity of the blocked accounts. Forbes India also reached out to Manish Maheshwari, the managing director of Twitter India, a number of times via phone and messages but did not hear back. On February 8, MeitY sent Twitter a list of another 1,178 accounts that it wants blocked, India Today reported. These accounts have reportedly been flagged for sympathising with the Khalistani movement or for having backing from Pakistan.  To comply with the blocking orders, Twitter said it had taken steps to reduce the visibility of hashtags containing harmful content. It also took a range of enforcement actions, including permanent suspension in certain cases, “against more than 500 accounts escalated across all MeitY orders” which are in clear violation of Twitter’s Rules. The microblogging platform informed MeitY of its enforcement actions on Wednesday.  Facebook, Google got blocking orders as well The government of India sent Section 69A blocking orders to not just Twitter, but Google and Facebook as well to take down content related to farmers’ protests, Forbes India has learnt. Twitter drew the IT ministry’s ire because it restored access to some of the accounts after drawing public backlash, while the other two platforms quietly blocked access to content on Facebook and YouTube, respectively.   While it is not clear what content was removed on Facebook in compliance with the blocking order, the video of at least one song supportive of the farmers’ protests has been taken down on YouTube. Blocked videos on YouTube included Punjabi singer Kanwar Grewal’s song Ailaan, which is critical of the controversial farm laws, The Tribune reported. While Ailaan is not available on Kanwar Grewal’s channel, it is still available on other YouTube channels, Forbes India found. 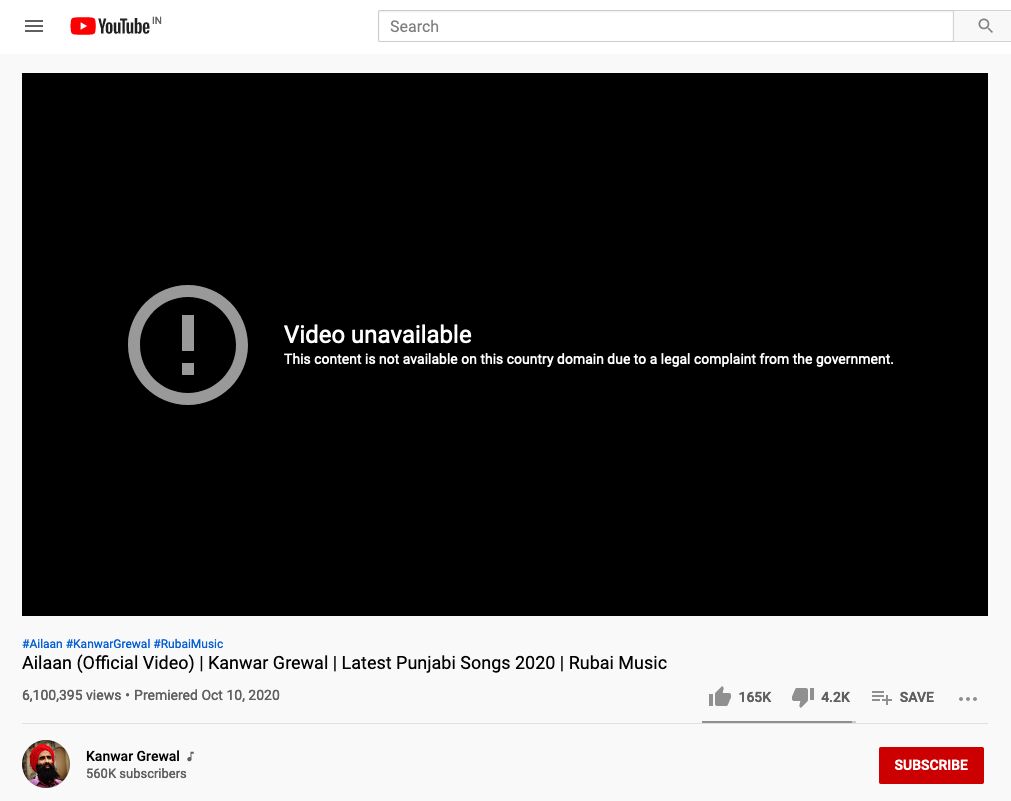 In response to queries by Forbes India, a YouTube spokesperson sent the following statement, “We comply with valid legal requests from authorities wherever possible, consistent with our longstanding policy and act quickly to remove identified content.” Forbes India has reached out to Facebook and Instagram for more information.  What is this Section 69A and why is it so controversial? Section 69A of the Information Technology Act, 2000, grants the government the right to block public access to any information generated, transmitted, received, stored or hosted in any computer resource “in the interest of sovereignty and integrity of India, defence of India, security of the State, friendly relations with foreign States or public order or for preventing incitement to the commission of any cognizable offence relating to above”.  Nodal officers, who are responsible for the Section 69A process in every ministry and department at both the central and state levels, send their complaint to the designated officer (DO) on behalf of their respective ministry or department. Each complaint is reviewed by the blocking committee headed by the DO and has representatives from the ministries of law and justice, home affairs, information and broadcasting, and the Indian Computer Emergency Response Team (CERT-In).  The DO, who is notified by the central government, convenes the committee where the members examine the content; s/he also identifies the intermediary or the person who is hosting the information and asks them to submit their response in person to the committee through a Section 69A notice.   After the intermediary’s deposition, the committee makes its recommendations to the IT secretary via the DO; the secretary then either approves or denies the blocking order.  In emergencies, the DO directly makes recommendations to the IT secretary who may then pass an interim measure. The blocking committee must be convened within 48 hours of the passage of the interim order and make its recommendations to the IT secretary. However, there is no maximum time that the IT secretary can take to pass the final order.  A separate review committee, comprising the cabinet secretary (chairperson) and two members—secretaries in the departments of legal affairs and telecommunications, must meet at least once every two months to review previous Section 69A orders. The decisions of this review committee supersede the decision of the IT Secretary.   The problem occurs because the rules that enable blocking access to electronic content make it mandatory to maintain “strict confidentiality” regarding all requests and complaints received, and actions taken thereof. It is also not covered by the RTI Act. It is also not clear if the intermediaries can appeal against a blocking order passed by the IT Secretary. There are not enough checks and balances in the Section 69A blocking system to ensure that the high threshold of national security concerns is actually met, point out experts.  All the government does is reveal to the Parliament the number of URLs blocked under Section 69A. In 2020, the number stands at 9,849.

These numbers do not give a clear picture of the extent to which the government blocks access to content that it deems threatening to national security. For instance, blocking the domain www.twitter.com would mean blocking access to 192 million accounts with all their tweets, likes and media content. Blocking www.twitter.com/forbes_india would mean blocking access to the thousands of tweets that Forbes India has put out over the years as well as its other activities such as the tweets it liked and retweeted over the years. Blocking access to a particular tweet means blocking one URL. Despite the significant difference in the scale of blocking, each of the aforementioned three blocking orders would be counted as blocking one URL.  It gets more complicated when it comes to blocking apps, as the IT ministry did with 267 Chinese-origin apps in 2020. Let’s take the case of TikTok. The app is removed from the iOS App Store, Google Play Store, and its website is blocked in India. The blocking orders are sent to the two app stores, and to the Department of Telecommunications to get the telecom service providers to block access to the entire domain (www.tiktok.com). Despite the magnitude of the block, it counts as only one URL.   It is understood that almost all Section 69A blocking orders are sent to social media platforms with very few being sent to DoT to block entire domains. 2020 was the first time that apps were blocked under Section 69A.  Numbers don’t add up

Since at least December 2018, at least one question is asked in each Parliament session about the number of URLs blocked under Section 69A. And the answers keep differing.  In March 2020, the IT ministry told the Lok Sabha that 3,635 URLs were blocked in 2019 but that number changed to 3,655 in September 2020. In 2018, the ministry informed the Lok Sabha that 1,329 URLs were blocked in 2017 but in 2019, that number increased to 1,385. Similarly, in December 2018, the Ministry informed the Lok Sabha that 964 URLs were removed in 2016 but in 2019, that number changed to 633. If that was not enough, in December 2018, MeitY informed the Lok Sabha that it had blocked 2,388 social media URLs in 2018 until December 31, 2018. The answer was given on December 12. True litmus test for Twitter Twitter sparked off a series of debates around free speech and online content moderation when it first fact-checked formed US President Donald Trump’s tweets in August 2020, and then permanently suspended his account following the insurrection at the US Capitol on January 6. However, in a country where freedom of speech is sacrosanct, it is easier for a private social media platform to enforce its content moderation policies and deplatform users who spread hate speech.  The real test happens in countries which, despite being democracies, are increasingly becoming intolerant of criticism of the government. India ranked 142 out of 180 in the Press Freedom Index for 2020, just three spots above Pakistan and three spots below Myanmar, a nation that recently underwent a successful coup.  The Modi government has already proven that despite the popularity of an app, it will not hesitate from banning it. Case in point: TikTok was banned citing national security despite having more than 125 million users in India. Twitter, on the other hand, has about 18 million users in India.

Tweets by @forbesindia
Regional push leads to 10% hike in subscriber base in 5 months: Star TV Head-Sports
Disputes-proofing and compliance readiness not optional for Start-ups in 2021: Burgeon Law