Though setbacks remain, it offers an opportunity to improve ties with neighbouring countries 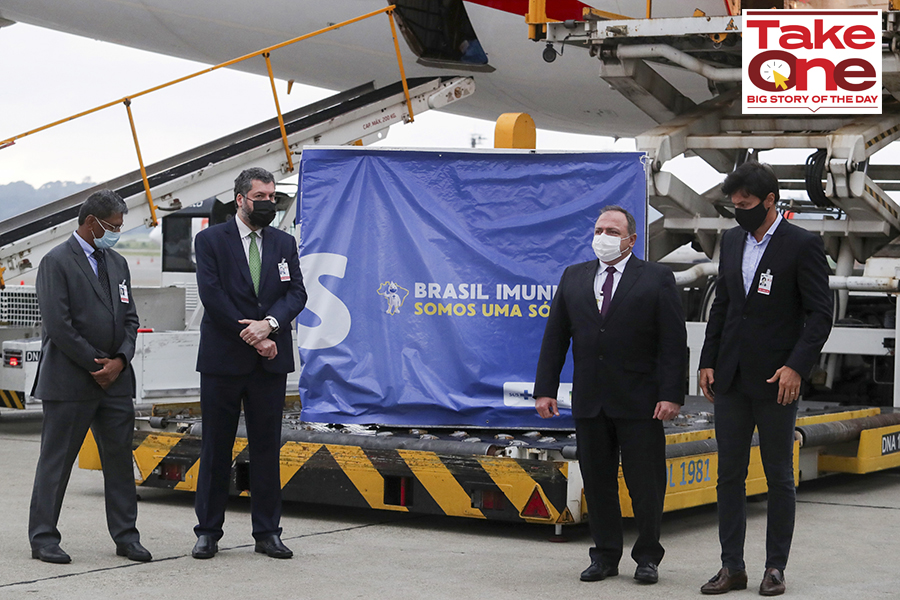 It’s been a diplomatic coup of sorts. And, it certainly hasn’t gone down very well with China. But that’s precisely what the Narendra Modi government could have expected after it unveiled Vaccine Maitri, an initiative to send millions of doses of the Indian manufactured Covid-19 vaccines to its neighbouring countries, and sometimes even as far as the Middle East and South America. India had earlier supplied hydroxychloroquine, Remdesivir, and paracetamol tablets, as well as diagnostic kits, ventilators, masks, gloves, and other medical supplies to a large number of countries during the pandemic. This time, however, even as the country rolled out what’s touted as the world’s largest Covid-19 vaccination programme, it also deftly moved to send vaccines to neighbouring countries. Quite importantly, the move also comes at a time when no other country has delivered free vaccines to other countries. Even the United States, where the Pfizer and Moderna vaccines are being made, is yet to send vaccines to developing nations hit hard by the Covid-19 crisis. “Immunisation programme is being implemented in India, as in other countries, in a phased manner to cover the healthcare providers, frontline workers and the most vulnerable,” India’s ministry of external affairs had said in a statement on January 19. “Keeping in view the domestic requirements of the phased rollout, India will continue to supply Covid-19 vaccines to partner countries over the coming weeks and months in a phased manner. It will be ensured that domestic manufacturers will have adequate stocks to meet domestic requirements while supplying abroad.” So far, India has managed to vaccinate some 2.8 million people since the nationwide vaccine rollout began on January 16, one of the fastest in the world. Over the past week, the country also managed to send over five million vaccine doses to countries including Bhutan, the Maldives, Bangladesh, Nepal, Myanmar, Seychelles, and Mauritius. Besides, doses have also been sent to Brazil, Morocco and more supplies are planned for South Africa and Saudi Arabia. India has approved two vaccines that are currently manufactured in India, Serum Institute of India’s Covishield, popularly known as the AstraZeneca vaccine, and Bharat Biotech’s indigenously developed vaccine, Covaxin. Several more vaccines, manufactured by Serum Institute of India, Zydus Cadila, Dr Reddy’s and Biological E, are likely to be ready over the next few months. “On a commercial level, the export has taken place for Brazil, Morocco, and Bangladesh. Further supplies to countries on commercial basis are likely to take place to Saudi Arabia, South Africa, Canada, Mongolia, and other countries,” a spokesperson for India’s external affairs ministry said on January 28. “We plan to supply 10 million vaccine doses to Africa and 1 million to the United Nations health workers under GAVI.” GAVI, the Global Alliance for Vaccines and Immunisation, through its Covax facility is targeting the equitable distribution of Covid-19 vaccines. 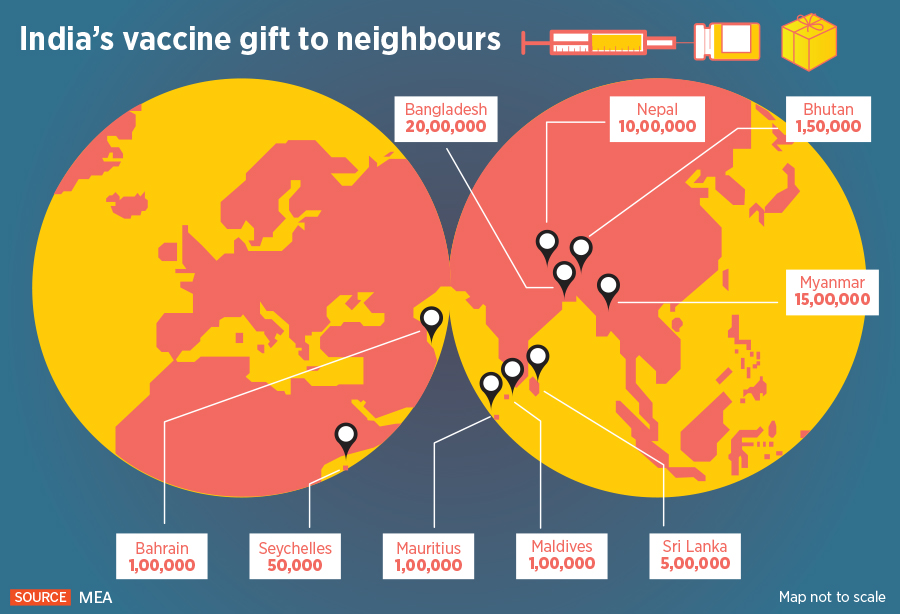 “India’s vaccine diplomacy is an important way for New Delhi to show regional and global leadership,” Daniel Markey, the academic director of the global policy program and senior research professor in international relations at Johns Hopkins University’s School of Advanced International Studies told Forbes India. “It shows that India has resources and capabilities of critical importance to the world, which is an important message for New Delhi to send to often-sceptical audiences.” The move to send vaccines, many of them to India’s neighbours free of cost, is in line with the Narendra Modi government’s plan to reclaim some lost ground in diplomatic relations and in championing the Neighbourhood First policy, a cornerstone of the Indian government’s diplomatic relations under Modi since 2014. India, meanwhile, hasn’t offered to send the vaccines to Pakistan.  Incidentally, the move also comes at a time when there had been a studied silence from India’s neighbours amidst the recent military confrontations with China at the borders. In June 2020, tensions between India and China had escalated after the death of soldiers in the disputed Galwan Valley, following a confrontation. Troops on both sides of the fence had engaged in a fierce hand-to-hand combat, with over 60 casualties in total, marking one of the most serious military conflicts between the two sides in decades. For long, India and China have been aiming for regional dominance, something that China has been aggressively pursuing with its One Belt One Road Initiative, a global infrastructure development strategy to invest in nearly 70 countries. While Pakistan is an important ally of China, Asia’s largest economy has been steadily ramping up its influence in the region, making investment commitments of more than $150 billion in Bangladesh, the Maldives, Myanmar, Pakistan, Nepal, and Sri Lanka. China is now also the largest overseas investor in the Maldives, Myanmar, Pakistan, and Sri Lanka. In Pakistan, China is already helping build the China–Pakistan Economic Corridor, a collection of infrastructure projects under construction since 2013, and passing through the disputed Pakistan occupied Kashmir (PoK). Can vaccine diplomacy help?

Tweets by @forbesindia
Acting is business too: Saif Ali Khan
What is Economic Survey?