Launched last September, it aims to become a virtual community for youngsters to find friends and internships, learn and shop 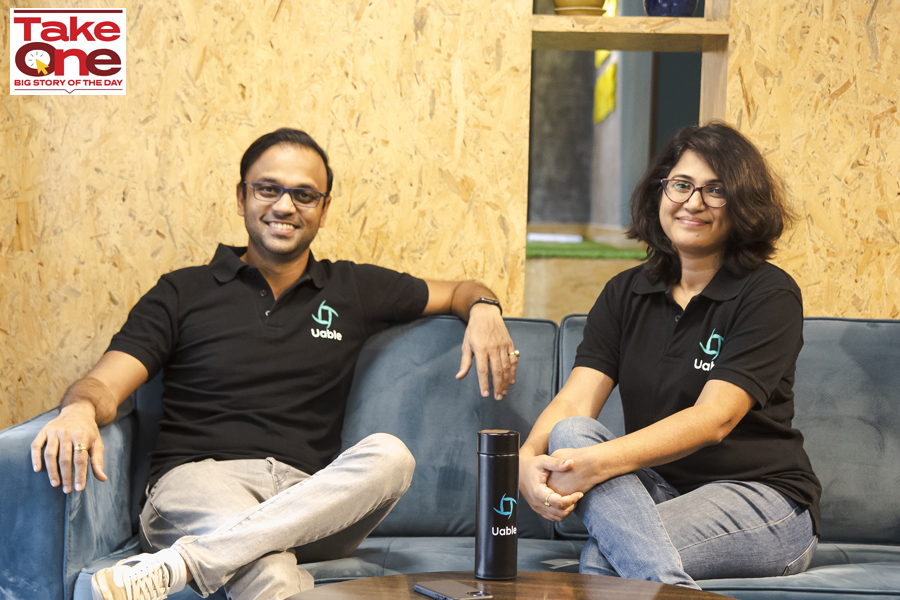 Uable, a teenage social networking app, was born of the belief and insight that teenagers are capable of doing anything, and was launched in September 2021. Co-founded by Saurabh Saxena and Vasavi Kandula, Uable is an online platform where teenagers can engage with each other, create content, learn, find internships, play games, and shop, among other things.
“My experience in the education space, where I worked closely with teenagers, taught me that it is always hard for the young to find acceptance in the digital landscape, despite being digital natives,” says Saxena. He and Kandula came up with Uable to bridge this gap and create a platform for those between 13 and 19 years of age.“ I believe social networks need to evolve and become more valuable to the young audience. Hence, we decided to come up with a platform that was specifically built for teens and is a safe environment for them to explore a diverse set of interests.”
Saxena (39), an IIT-Roorkee graduate, has been an educator for 13 years, and was co-founder of edtech platform Vedantu. While working with numerous children at Vedantu, and during other previous teaching endeavours, Saxena realised that while schools, exams and marks are a big part of a teenager’s journey, they are seeking much more than that.

To help kids discover their passions, interests, and activities to excel in, Uable provides 20 clubs, or virtual communities, which they can join, depending on their interests. These clubs cover interests such as design, art, gaming, career, anime and K-pop.
Tejas Ruplal Meshram, an 18-year-old from Navi Mumbai, has been using Uable for five months now. He has about 4,000 followers on the app and is part of clubs such as gaming, fashion and design. “Five months ago, after attempting an online physics exam, I was bored and was scrolling through Instagram when I ran into an ad for Uable. I installed it and have been hooked since then,” says Meshram, who uses the app for about 2 to 3 hours everyday.
He thinks it is a fine medium to make new friends and talk to new people.
With 2.5 lakh users and 5 lakh downloads, Uable is not just a networking and learning platform, but also provides opportunities for teens to take on challenges, win reward points in terms of ‘U-coins’ and spend them at the ‘U-store’, an in-app store with over 200 products from brands such as Snackible, boAt, The Souled Store, Portronics, and Streak (a teen fintech platform).

Uable is yet to earn any revenue, and is focusing on user growth and engagement. Initially bootstrapped, it has raised $4.5 million from investors such as 3one4 Capital, Jafco Asia and Chiratae Ventures.“
The revenue sources for Uable would be pro-tools for creators and brands, teens purchasing U-coins to unlock premium content and communities, and Uable getting a commission from the commerce enabled for creators and brands,” explains Kandula (37), an IIT-Madras graduate.
A report by The Global Statistics says that Instagram is the most popular social media app in India in 2022, with about 76 percent of social media users opting for it. The report adds that a big percentage of Instagram users are teenagers. Meta (Facebook), Twitter, LinkedIn, and Pinterest are some of the other popular social media apps among teens.
Saxena says, “The big tech in the world of social media is Uable’s competition,” with apps such as Discord being a direct competitor. Other competitors include Instagram, Moj, Snapchat, and Pinterest.

“We are all about giving power to teenagers; Uable’s community guidelines were written by them. They compiled and published the guidelines themselves on the app,” says Kandula.
The app’s business model provides an ad-free experience for teens, although this is not the first time a social networking app has done this. Ello, an online social networking service started in March 2014 in the US, claimed to be completely ad-free, but users were not very clear with its privacy statement. Eventually the app didn’t work out, and was later converted into a public benefit corporation. Another social network called Diaspora was created in 2010 to become an ad-free alternative to platforms such as Facebook.
Saxena says Uable has some features similar to Instagram and Discord, but also has its “own spin”. During the Covid-19 pandemic, when physical interactions and outdoor activities were at a minimum, “teens found a friend in Uable to do all the things they had missed out on,” he adds.
Although the app is marketed as a teen-only platform, there is room for adults. Those above the age of 18 can join the app as mentors who can be digital content creators, such as YouTubers and influencers.

Since Uable’s target group–13 to 19-year-olds—are a vulnerable age group, there are safety measures put in place. “We ensure their safety by filtering out harmful, abusive, and disturbing content. Teens can report any negative comments on the platform, and they are immediately taken down,” says Kandula. Chats between users are private, and the app detects words that alert the app’s team to ensure safety and prevent bullying. For deeper moderation of content, the app also uses artificial intelligence (AI).
Dr Radhika Bapat, a cross-cultural psychologist and counsellor, says the technology landscape is ever evolving; it is all-pervasive and ubiquitous in our lives, and it would be incorrect to either vilify or venerate this trend. “Personally, I believe it is important that we empower our children to protect themselves, and brace ourselves for the inevitability of the internet, social media, and games being part of the fabric of our lives.”
“I feel that introducing a subject in schools like ‘Defense against the Dark Web’ [similar to ‘Defense against the Dark Arts’ in JK Rowling’s Harry Potter series of books] where children are taught how to manage social exchanges, navigate platforms safely, report abuses, understand issues like online sexual predation, sexting, trafficking, bullying and insecurities. Most importantly, to devise a way where children are taught to keep the lines of communication open with teachers, parents or other trusted adults in order to have conversations and ‘meaning making’ around things that they do not understand or that affect them,” she explains.

Anurag Ramdasan, partner at 3one4 Capital, believes Uable has had an “interesting and iterative journey since inception.” “Saurabh, with his entire career being a commitment to the next generation, made us want to partner with Uable. The way it has designed experiences around high-interest clubs and close-knit communities is fascinating. We are incredibly bullish about what Saurabh is doing and are extremely excited to see this unique platform scale up,” he says.

“We are aiming to onboard 10 million teenagers by the end of 2024. Alongside engagement and growth of users, we will enable creators to weave amazing communities and even monetise their digital content and services,” says Kandula.